Between 1 December 1994 and 31 January 1995, Salmonella agona infections increased abruptly in England and Wales; isolates of S. agona from 41 patients with diarrheal illness were referred to the Laboratory of Enteric Pathogens of the Public Health Laboratory Service, compared with nine cases in the previous 12 months. Most isolates were from children under 10 years of age. Many of the cases were in Jewish children in London and several other parts of England; two children required hospital admission. S. agona can be subdivided by phage typing and, by using a method developed in the Laboratory of Enteric Pathogens (L. R. Ward, unpublished manuscript), we found that the isolates belonged to S. agona phage type (PT) 15. The outbreak was traced to a kosher savory snack imported into the United Kingdom from Israel, and all isolates from the contaminated product and from patients who had a history of consuming this product were found to belong to S. agona PT 15 (1). (Full details of this outbreak will be published elsewhere.)

For outbreak investigations, the policy of the Laboratory of Enteric Pathogens is to use serotyping, phage typing, and antibiogram analysis (R-typing) for the primary identification and subdivision of isolates, supplemented when appropriate by a range of DNA-based methods, including plasmid analysis, ribotyping, insertion sequence (IS) 200 fingerprinting, and pulsed-field gel electrophoresis (PFGE). The use of these techniques has recently been reviewed (3). Of these methods, PFGE has been used for the molecular fingerprinting of S. typhi (4, 5) and for subdivision within epidemic phage types of S. enteritidis (6, 7).

Because a small number of patients in England and Wales had been infected with S. agona PT 15 in the 11 months before the kosher snack outbreak, we decided to characterize the outbreak isolates by genotypic methods and, if possible, to use such methods for subdivision within the phage type. For S. agona, strains of this serotype do not possess IS200 elements (8), and studies by the Laboratory of Enteric Pathogens have demonstrated that the serotype is unlikely to be subdivided by ribotyping (M.D. Hampton, E.J. Threlfall, unpublished observations). PFGE was, therefore, considered the method most likely to provide a genotypic fingerprint suitable for epidemiologic investigations. Isolates from the food product and from all patients infected both during the outbreak and in the preceding 11 months were, therefore, examined by PFGE. Similarly, because of the international distribution of the contaminated food product, S. agona PT 15 organisms isolated in Israel and Canada from the food product and also from specimens from patients in Israel, the United States, and France were examined by PFGE. 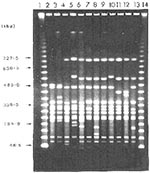 The predominant PFGE profile, S. agona PFP (XbaI) 6, gave at least 15 resolvable fragments, ranging from 25 kbp to 485 kbp; this profile type was exhibited by 51 of the 78 isolates examined. The PFP 6 variant, designated PFP 6a and identified in one of the Canadian food isolates, could be differentiated from PFP 6 by the presence of an additional fragment of approximately 395 kbp; in all other respects, S. agona PFP 6a was indistinguishable from S. agona PFP 6.

The distribution of XbaI-generated PFGE types between source group and country of isolation in isolates of S. agona PT 15 is shown in the Table. Of the 10 PFGE profiles in 46 isolates from persons in the United Kingdom, 26 isolates (56.5%) belonged to PFP 6. All isolates with this profile pattern were made between 25 November 1994 and 17 February 1995 and were from patients associated with the kosher snack–related outbreak. Two isolates of S. agona PT 15 from the contaminated food product were also examined and both belonged to PFP 6. In contrast, PFP 6 was not identified in any isolates of S. agona PT 15 made in the United Kingdom in the 11 months before the outbreak. In one case, S. agona PT 15 with the PFGE profile PFP 9 was isolated from a patient just after the outbreak began, in November 1994. However, the PFGE profile of this isolate was sufficiently unrelated to that of the outbreak isolates (PFP 6) to warrant exclusion of the patient from the kosher snack–related cases. Nine PFGE profiles were identified in the remaining 19 U.K. isolates, with PFPs 5, 2, and 1 predominating (Table). Four of five patients infected with isolateswith the PFP 2 pattern lived in northwestern England, and three of five patients with the PFP 5 profile lived in southwestern England or southern Wales. None of these nine PFGE profiles were identified in isolates from case-patients associated with the kosher snack outbreak.

In conclusion, 11 distinct PFGE profile types and one variant type have been identified in 78 isolates of S. agona PT 15 made in the United Kingdom, Israel, the United States, Canada, and France between December 1993 and April 1995. One PFGE profile type, PFP 6, was specifically associated with isolates from a contaminated savory snack and from persons who consumed this product in the United Kingdom, Israel, and the United States. These results demonstrate that one strain of S. agona PT 15, with a characteristic PFGE profile, was responsible for outbreaks in the United Kingdom, Israel, and the United States in 1994-95. In contrast, the PFGE profile types of isolates of S. agona PT 15 identified in the United Kingdom either in the 11 months before the outbreak (or in one case at the start of the outbreak) and of isolates of PT 15 obtained from patients in France were unrelated to PFP 6. We conclude that PFGE fingerprinting provides a genotypic method for subdivision within phage type 15 of S. agona and that this method has provided an invaluable supplement to phage typing for investigation of international outbreaks. It is, however, important to realize that PFGE typing may not be applicable to all salmonella serotypes and phage types; thus, the method’s results should be carefullyevaluated by using both epidemiologically-related and unrelated isolates before it is used for outbreak investigations.