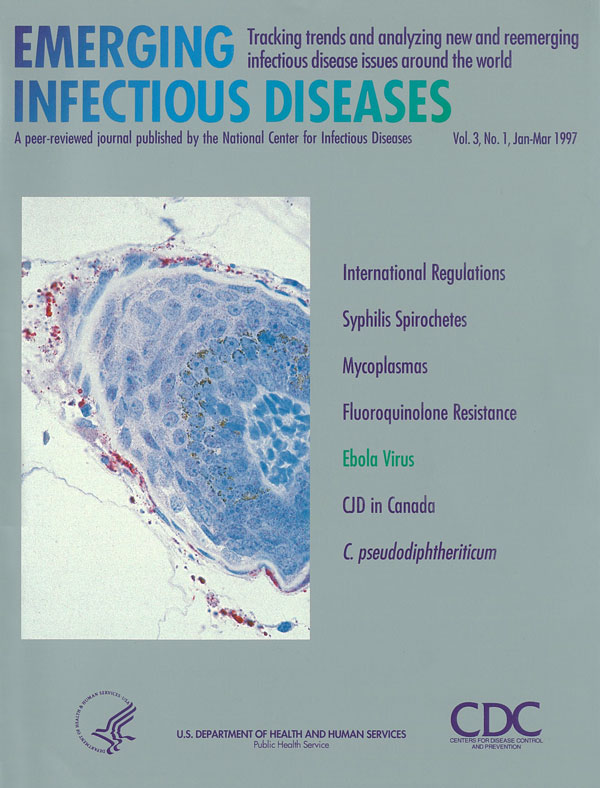 Color and a graphic image were added to EID journal covers after two years of publication. Previous covers were merely grey and white table of contents.  Founding EID managing editor, Polyxeni Potter, said “I knew that we had to do better with the cover of the journal—make it more attractive and interesting so that readers would recognize it and pick it up.” So in March of 1997, the first color issue of EID with its now signature cover was printed. In addition to the timely, peer-reviewed scientific content of the journal, most readers would agree that the vivid, artistic covers of EID have helped distinguish it from other scientific journals.

This first color cover shows immunostaining of Ebola virus antigens within subepithelial vascular endothelial cells in a skin biopsy from a chimpanzee that died during the 1996 Gabon outbreak. 18 years later this is still a timely image.

Listen to a podcast about the history of EID cover art

Page created: April 17, 2015
Page updated: November 05, 2015
Page reviewed: November 05, 2015
The conclusions, findings, and opinions expressed by authors contributing to this journal do not necessarily reflect the official position of the U.S. Department of Health and Human Services, the Public Health Service, the Centers for Disease Control and Prevention, or the authors' affiliated institutions. Use of trade names is for identification only and does not imply endorsement by any of the groups named above.
ScholarOne Submission Portal
Issue Select