And, here’s an interesting CDC article discussing the EIP. 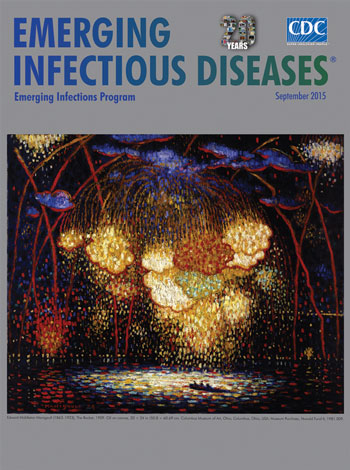 The September 2015 issue of CDC’s Emerging Infectious Diseases Journal commemorates the 20th anniversary of CDC’s signature Emerging Infections Programs (EIP). This partnership among CDC, state and local health departments, academic institutions, infection control practitioners, and other federal agencies has been instrumental in advancing CDC’s core mission of preventing illnesses and saving lives since 1995. This program protects against the spread of infectious disease by monitoring diseases as they emerge; evaluates and retools our responses to outbreaks; and transfers what has been learned to the public health community.

EIP activities have had a measurable impact on public health. For example, data from the Active Bacterial Core surveillance (ABCs) showed the decline in pneumococcal disease after the pediatric pneumococcal conjugate vaccine was introduced, and informed the serotype composition of newer pneumococcal vaccines. ABCs work also helped guide the formulation and evolution of policies for preventing sepsis in newborns due to Group B Streptococcus. Another key activity, The Foodborne Diseases Active Surveillance Network (FoodNet) has provided a foundation for food safety policy and prevention efforts since 1996, estimating the number of foodborne illnesses, monitoring trends in incidence of specific foodborne illnesses, and attributing illnesses to specific foods and settings. FoodNet documented significant decreases in the incidence of E. coli O157 infections since 1996–1998, which corroborated data from other studies that indicated that ground beef had been made safer because of regulatory and industry actions.

Taking aim at the most common cause of healthcare-associated infections in US hospitals, EIP supported an analysis of C. difficile infections that estimated that there were close to 500,000 cases of C. difficile infection in the United States in 2011. EIP’s Healthcare-Associated Infections/Community Interface Activity provides essential data such as this on the epidemiology of other healthcare-associated pathogens, infections, and antimicrobial drug use. Also, the Advisory Committee on Immunization Practices, a group of medical and public health experts that develops recommendations on how to use vaccines, has used EIP research to develop recommendations that will reduce the incidence of vaccine-preventable diseases and increase the safe use of vaccines and related biological products.

The 22 articles that focus on various EIP activities in the Emerging Infectious Diseases Journal, which is also celebrating its 20th anniversary in 2015, provide an in-depth look at how this vital network has strengthened the science base and informed public health policy and practice.

Page created: August 21, 2015
Page updated: August 21, 2015
Page reviewed: August 21, 2015
The conclusions, findings, and opinions expressed by authors contributing to this journal do not necessarily reflect the official position of the U.S. Department of Health and Human Services, the Public Health Service, the Centers for Disease Control and Prevention, or the authors' affiliated institutions. Use of trade names is for identification only and does not imply endorsement by any of the groups named above.
ScholarOne Submission Portal
Issue Select