Salmonella Serovars from Humans and Other Sources in Thailand, 1993–2002

We serotyped 44,087 Salmonella isolates from humans and 26,148 from other sources from 1993 through 2002. The most common serovar causing human salmonellosis in Thailand was Salmonella enterica Weltevreden. Serovars causing human infections in Thailand differ from those in other countries and seem to be related to Salmonella serovars in different food products and reservoirs.

Salmonella enterica is one of the most common causes of human gastroenteritis. The infection is caused primarily by improper handling and digestion of uncooked food; a large number of food animal sources have been identified as reservoirs of the bacteria (1). More than 2,500 serovars of S. enterica have been identified; most have been described as the cause of human infections, but only a limited number of serovars are of public health importance. S. enterica serovars Typhimurium and Enteritidis have been reported to be the most common causes of human salmonellosis (1,2). However, in some regions other serovars are of greater importance (3,4).

Different serovars in one country can be of global importance because of travel and animal and food product trade. Knowledge about the occurrence and epidemiology of different serovars in different countries and geographic regions may assist in the recognition and tracing of new emerging pathogens. We review the trends in serovars of Salmonella causing infections in humans and potential reservoirs in Thailand during 1993 to 2002.

The World Health Organization (WHO) National Salmonella and Shigella Centre in Bangkok receives all isolates suspected to be Salmonella from all diagnostic laboratories throughout Thailand. From1993 to 2002, these have included 62 governmental general hospitals; 5 private hospitals; 12 regional medical centers; 3 laboratories within the Department of Livestock Development; 6 laboratories within the Fisheries Department, the Laboratory of Bangkok Health Center, and U.S. Embassy; and 28 food industry laboratories. All laboratories are encouraged to use both direct plating and enrichment broth to isolate Salmonella. For enrichment the laboratories use Selenite, Tetrathionate or Rappaport-Vassiliadis Soya Peptone broth. For direct plating they use Salmonella/Shigella, Xylose Lysine Desoxycholate, Brilliant Green or Modified Semi-solid Rappaport-Vassiliadis agar. Accepted brands are Difco, Oxoid, MAST, BBL, and Merck. For shipment the isolates are stabbed in nutrient agar sticks.

On arrival, all isolates were purified and confirmed to be Salmonella on the basis of reactions on triple sugar iron agar and lysine indol motility agar. All strains identified as S. enterica were serotyped according to the Kauffman-White serotyping scheme (5). Salmonella antisera (S & A Reagent Laboratory LMT, Bangkok, Thailand) were used for serotyping. From 1993 through 2002, a total of 70,235 isolates received were confirmed as S. enterica and serotyped.

Figure 1. Trends over time for the 10 most common Salmonella serovars causing infections in humans between 1993 and 2002. 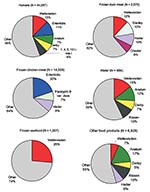 Figure 2. Distribution of the most common Salmonella serovars among the different reservoirs. Only serovars accounting for more than 6% of the isolates were included.

Samples have not been systematically taken from the different reservoirs for Salmonella infections in humans. However, data from samples were available from chicken, seafood, other food products, and water for all 10 years. Data about duck were only available from 1998 to 2002. The 10 most common serovars from all sources are given in Table 2. All serovars that were represented with >6% of the isolates are given in Figure 2.

S. enterica continues to be one of the most important causes of foodborne gastrointestinal infections in humans. During the last few decades S. Enteritidis and S. Typhimurium have emerged as the two predominant serovars in most Western countries. The epidemiology of these serovars has been studied, and different programs have been established to limit the spread of these serovars. However, other serovars may have a different epidemiology, and conditions are optimal for spread between reservoirs in some countries.

S. Enteritidis infections in humans in Thailand increased from 1.3% in 1990 to 14% in 1993 to 1994 (4). Thus, Thailand has also been part of the global pandemic of S. Enteritidis observed in the late 1980s (9). The 1995 global survey conducted by WHO showed that the global pandemic has continued and expanded (2). The S. Enteritidis pandemic appears to have ended in 1997; this finding is similar to the decrease observed in Thailand, where S. Enteritidis has decreased during the last decade. However, this serovar is still an important cause of human infections, reflected in the increase in 2002. The frequent occurrence of this serovar in chickens suggests that poultry may be an important reservoir, a finding that is consistent with almost all other studies in other countries (10). Eggs have also been found to be important reservoirs in other countries (10) but were not examined in this study.

S. Anatum has consistently been one of the most important causes of salmonellosis in Thailand. The main reservoirs seem to be other food products and water. This serovar has previously been isolated from a large number of different animal sources.

The importance of S. Derby has decreased in Thailand. S. Derby has been associated with pigs (11,12). Pork and other swine products were not sampled in this report, but a frequent occurrence of the serovar was observed among unspecified other food products, which could include pork.

S. Typhimurium is among the most prevalent serovars in Europe and America and of growing importance in Southeast Asia, Africa, and the Western Pacific (2). In Thailand, the importance of this serovar has not increased and continues to account for 5% of all human infections. S. Typhimurium can be found among a large number of different animal reservoirs; no specific source has been found.

S. Rissen has been isolated infrequently as a cause of human infections, and limited information about the potential reservoirs are available. The importance of this serovar seems to be increasing in Thailand. A specific reservoir for S. Rissen has not been identified, but the frequent occurrence of this serovar in Salmonella from water and other food products indicates that a foodborne or waterborne reservoir is a possibility.

S. Stanley infections were among the 15 most common serovars in 12 of 104 countries (2) in 1995. The relative importance of this serovar seems to be increasing in Thailand, and the only reservoir where the serovar was found in high frequency was duck.

S. Panama has been the cause of a number of outbreaks in different countries (13) and among the 15 most common serovars in 10 of 104 countries in a recent WHO survey (2). To date, no specific reservoir has been identified. The importance of this serovar seems to be increasing in Thailand and may be correlated to a simultaneous increase among food products.

S. Schwarzengrund has only been isolated sporadically from infections in humans and from animal sources. The number of infections caused by this serovar in Thailand is still very low. However, the proportion seems to be increasing in isolates from humans and chicken. From 1993 to 1997, this serovar constituted <0.2% of all reported humans salmonellosis, a proportion that increased from 1% to 2% in 2001 to 2002. During the same period, the proportion among isolates from chicken has increased from a similar figure to 26% of all isolates in 2001 and 7.2% in 2002. Thus, some evidence exists that this serovar could be increasing in importance in the chicken population and subsequently in humans in Thailand. S. Schwarzengrund has also been found in chickens in other studies, suggesting that poultry could be the most common reservoir (14,15).

A large number of other serovars were also isolated from humans and nonhuman sources. However, some serovars most commonly found in the 1995 WHO survey were only infrequently observed in Thailand. S. Hadar was the 12th most common serotype and S. Typhi was the 16th, while other commonly observed serovars such as S. Infantis and S. Newport were not observed among the 25 most common serovars. S. Hadar has been associated with poultry (15). This finding was also observed in this study; S. Hadar was frequently isolated from chicken and duck. However, this finding does not seem to have a major impact on the number of infections in humans.

The results from this report show that serovars can differ largely between countries and regions, which is likely related to the available reservoirs for persistence and spread of Salmonella infections. The distribution of serovars causing infections in Thailand differs markedly from those reported in other countries and seems to be related to the Salmonella serovars in the different food products and other reservoirs for infections. Of particular interest is the frequent occurrence of S. Weltevreden and recent increase in occurrence of S. Rissen, S. Stanley, and S. Schwarzengrund.

Mrs. Bangtrakulnonth is currently head of the World Health Organization National Salmonella and Shigella Centre at the National Institute of Health, Department of Medical Sciences, under the Ministry of Public Health in Thailand.

Salmonella Serovars from Humans and Other Sources in Thailand, 1993–2002