Dengue viruses are transmitted by Aedes mosquitoes in tropical regions worldwide. The global incidence of epidemic and endemic dengue fever has increased substantially and is estimated at 50–100 million cases per year. International travel leads to imported cases in countries of the Northern Hemisphere (1), where dengue fever is an important differential diagnosis of fever in travelers returning from the tropics. Occupational needlestick injuries continue to pose a substantial risk for healthcare workers and occur at rates of 1.0 to 6.2 per 100 person-years (2). Common concerns are the transmission of HIV, hepatitis B virus, and hepatitis C virus. However, other pathogens can be transmitted as well. We report a case of nosocomial transmission of dengue virus.

The index patient, a 26-year-old woman, was admitted to the infectious disease ward of a university hospital with a temperature of 40°C and myalgias 3 days after she returned from a 3-week trip to Cambodia and Thailand. Dengue virus infection was subsequently diagnosed, and mild hepatitis and a rash developed. She was discharged in good condition after the fever subsided. On the day of admission of the index patient (day 0i), a nurse sustained a needlestick injury with a hollow needle that had been used for drawing blood from the index patient. The needlestick resulted in a bleeding puncture wound that was immediately treated with an antiseptic. The index patient did not report any high-risk activity for HIV or hepatitis B virus, and the nurse had been immunized against hepatitis B virus. Therefore, no specific postexposure prophylaxis was performed. The nurse had previously been in good health and had not traveled outside Germany in the preceding 12 months. 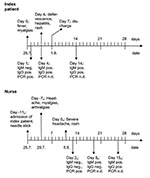 Four days after the needlestick, headache, myalgias, and arthralgias developed in the healthcare worker, for which she took ibuprofen. Seven days later, when she was experiencing an intense headache and noticed a macular rash on her trunk, she sought treatment from a local doctor (day 0n). Physical examination showed bilateral cervical lymphadenopathy. On day 2n, she visited our service, where dengue virus infection was diagnosed by using a Light Cycler (Roche Diagnostics, Mannheim, Germany) polymerase chain reaction (PCR) method. Her symptoms lessened gradually over the course of 4 weeks, and she was on sick leave for 5 weeks. The time frame of the respective clinical presentation and the virologic results of the index patient and the nurse are shown in the Figure; laboratory data are presented in the Table.

This is the fourth reported case, to our knowledge, of nosocomial dengue virus transmission (5–7) and the first in which TaqMan RT-PCR was used to provide evidence of nosocomial transmission before the detection of an antibody response. The index patient had acquired a dengue virus infection in Southeast Asia and experienced typical symptoms. In particular, she was febrile on admission, when the needlestick injury of the nurse occurred. In the health care worker who sustained the injury, cephalgia and myalgias developed after an incubation period of 4 days. A typical rash appeared after 11 days, when she also had a severe headache. The absence of fever, the most common sign of dengue fever, is likely due to the administration of ibuprofen. Both persons completely recovered. However, the healthcare worker was on sick leave for 5 weeks with resulting socioeconomic consequences.

The diagnosis was confirmed in both cases by both seroconversion and detection of dengue viral RNA by TaqMan RT-PCR; the latter gave positive results in both cases 3 and 6 days, respectively, before serum specimens were shown to contain antibody. Dengue viremia is known to correlate well with the presence of fever (8), which was the case in the index patient. Our report illustrates the potential of percutaneous nosocomial transmission of dengue viruses. This risk is likely to increase with the increase in the number of dengue infections imported to countries where dengue viruses are not endemic.

Dr. Wagner is an infectious disease specialist at the University Hospital, Freiburg, Germany. His research intersts focus on iron metabolism and intracellular survival of mycobacteria.

Page created: April 07, 2011
Page updated: April 07, 2011
Page reviewed: April 07, 2011
The conclusions, findings, and opinions expressed by authors contributing to this journal do not necessarily reflect the official position of the U.S. Department of Health and Human Services, the Public Health Service, the Centers for Disease Control and Prevention, or the authors' affiliated institutions. Use of trade names is for identification only and does not imply endorsement by any of the groups named above.