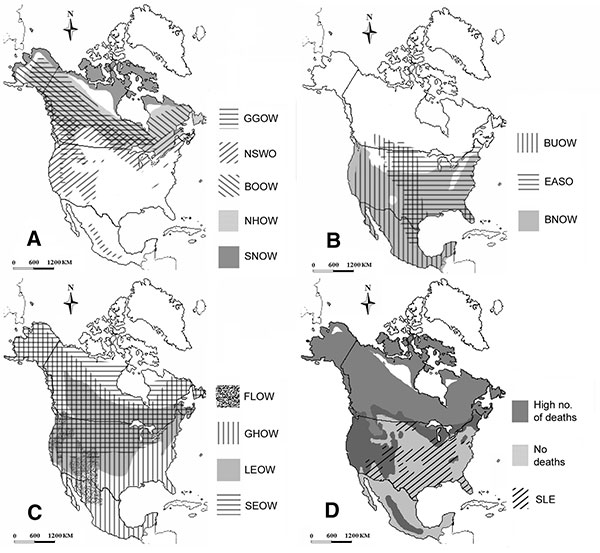 Figure 2. A) Native breeding range of owl species showing high death rates (>90%), B) no deaths, C) low death rates (<20%), and D) the combined distributions of species in the high and no mortality groups with that of Saint Louis encephalitis (SLE) in the United States and Canada. The distribution maps have been redrawn based on maps previously published (16–19). The distribution of SLE is based on human cases reported in the United States and in Canada from 1964 to 2000 (25,26). Only states and provinces that had >1 case per 100,000 capita during this period were included. GGOW, Great Gray Owl; NSWO, Northern Saw-whet Owl; BOOW, Boreal Owl; NHOW, Northern Hawk Owl; SNOW, Snowy Owl; BUOW, Burrowing Owl; EASO, Eastern Screech Owl; BNOW, Barn Owl; FLOW, Flammulated Owl; GHOW, Great Horned Owl; LEOW, Long-eared Owl; SEOW, Short-eared Owl.