During the 2003 severe acute respiratory syndrome (SARS) outbreak, a real-time quantitative polymerase chain reaction, which targets the nucleocapsid gene at the 3′-end of the viral genome, was established to detect and identify the SARS-associated coronavirus. We describe the use of this assay to screen >700 clinical samples.

Severe acute respiratory syndrome (SARS) is a new infectious disease of humans, first recognized in late February 2003 in Hanoi, Vietnam. The disease spread rapidly, with cases reported from 29 countries on five continents over 4 months (1–7). By July 3, 2003, this epidemic resulted in 8,439 reported cases globally, of which 812 were fatal (8). Rapid identification of the causal agent as a novel coronavirus (SARS-CoV) represents an extraordinary achievement in the history of global health and helped to contain the epidemic (7). Nonetheless, the epidemiology and pathogenesis of SARS remain poorly understood, and definitive diagnostic tests or specific treatments are not established. Since the origin of the virus and its animal reservoirs remain to be defined, the potential for recurrence is unknown. This fact underscores the importance of establishing sensitive and efficient methods for diagnosis and surveillance.

Immunofluorescence and enzyme-linked immunosorbent assays (ELISA) are reported to inconsistently detect antibodies to SARS-CoV before day 10 or 20 after the onset of symptoms, respectively (7,9). Thus, although helpful in tracking the course of infection at the population level, these serologic tools have less usefulness in detecting infection at early stages, when there may be potential to implement therapeutic interventions or measures, such as quarantine that may reduce the risk for transmission to naïve persons. In contrast, polymerase chain reaction (PCR)–based assays have the potential to detect infection at earlier time points. We describe a sensitive real-time PCR assay that can be readily standardized across laboratories and report its use in a survey of more than 700 samples from persons diagnosed with probable SARS during the 2003 epidemic in Beijing.

A calibration standard was generated by PCR amplification of a 1,277–bp fragment comprising part of the N open reading frame (ORF) and the 3′ noncoding region (Co-STND-U275, 5′-CCCGACGAGTTCGTGGTGGTG; Co-STND-L1529, 5′-GCGTTACACATTAGGGCTCTTCCATA). The product was cloned into vector pGEM-Teasy (Invitrogen, Carlsbad, CA), and serial dilutions of linearized plasmid were used to optimize the assay. RNA standards were generated by in vitro transcription of linearized plasmid DNA using a mMESSAGE mMACHINE T7 kit as recommended by the manufacturer (Ambion, Austin, TX). A portion of the construct (nucleotides 682–1105 of the N ORF) was modified through site-directed mutagenesis, to distinguish plasmid-derived products from authentic products in diagnostic applications. Mutations introduced were an A to G change at position 845 of the N ORF, and an A to C change at position 866, creating a unique ApaI restriction site.

Detection of live virus was assessed by using supernatant from virus-infected Vero E6 cells (isolate BJ01; 4th passage; 108 TCID50/mL) tenfold diluted to 10–12 in tissue culture media. RNA from 140-μL aliquots of each dilution was extracted and resuspended in 60 μL of DEPC-treated water for reverse transcription (9 μL RNA/20-μL reaction) and PCR (5 μL/assay). 20 μL of each virus dilution were spiked into 180 μL of clarified supernatant of a fecal preparation to simulate clinical specimens, and RNA from 140-μL aliquots was extracted and processed as above.

Figure 1. Standard curve and amplification plot using serial dilutions of plasmid DNA (A) or of cRNA (B).

A standard curve of plasmid concentration versus threshold cycle was generated with a cloned version of the 3′ terminal portion of the viral genome. A correlation coefficient (r2) of 0.9913 showed a linear relationship between threshold cycle (Ct) and plasmid concentration (0–105 copies) (Figure 1A). The detection limit for plasmid DNA was <5 copies per assay (Ct = 42.66). A linear relationship was consistently obtained for input loads of 101–105 copies per assay.

Standards for RT-PCR were generated by in vitro transcription of RNA from linearized plasmid template with T7 polymerase. Logarithmic dilutions of the synthesized RNA yielded results comparable to the DNA standards (r2 = 0.9950; Figure 1B). 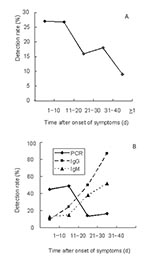 Materials from persons who had probable SARS included 326 fecal samples and 426 blood samples. Control specimens collected during the outbreak from healthy persons included 16 fecal samples and 82 blood samples. The detection rate in fecal samples was 27% during the first 20 days after onset of symptoms (Table, Figure 2A). In the 20 days that followed, the detection rate declined to 16% to 18%, but even after >40 days, 9% of samples gave a positive reading. A similar time was observed in the analysis of blood samples; however, a higher the detection rate of 45% to 49% was obtained (note that only 11 of the samples were matched for blood and feces). During the first 20 days after onset of symptoms, the detection rate of RT-PCR in blood was significantly higher than that for IgM (10%–24%) or IgG antibodies (13%–15%) (Table, Figure 2B). Twenty-one to 40 days after onset of symptoms, serologic findings were more frequently positive than RT-PCR.

Of the 16 fecal and 82 blood samples obtained from healthy persons, one blood sample yielded a positive result in RT-PCR (confirmed by repeated assays). Because the sample was collected during the outbreak, it may represent a true infection in a person who was not yet symptomatic or who did not have classical symptoms (no clinical information for the period after sampling was available).

We also analyzed 180 sputum and 76 throat-washing samples from an unrelated cohort of persons with a diagnosis of probable SARS, for which the time after onset of symptoms had not been reported. The RT-PCR detection rate obtained in these samples was 63% for sputa, and 15% for throat washing samples (data not shown).

It was not possible during the Beijing outbreak to obtain clinical materials in a prospective serial fashion from a defined SARS-CoV–infected patient cohort. Thus, some samples represent persons with respiratory symptoms caused by pathogens other than SARS-CoV (10). However, confidence in the clinical criteria is enhanced by an 87% seropositivity in samples taken 31–40 days after onset of symptoms.

Current real-time RT-PCR assays allow sensitive detection of SARS-CoV nucleic acid in clinical specimens by targeting N gene sequence, as shown here, or pol gene sequence (11–15). A major advantage to real-time PCR platforms is that amplification and analysis are completed in a closed system. Thus, the risk of contamination, which can confound conventional (frequently nested) RT-PCR protocols (5,11,16), is markedly reduced. Whether different positivity rates reported for various SARS-CoV assays (12–14,17) reflect true differences in assay performance, or merely differences in specimen type or differences in sample preparation (13), will only become apparent after comparative quality control tests using identical samples in the various assays and laboratories. Using calibrated DNA and RNA standards, we achieved comparable results with the assay reported here in the New York and Beijing laboratories.

RNA integrity is a critical determinant of sensitivity in RT-PCR SARS-CoV assays. Samples were not collected at clinical sites with the objective of nucleic acid analysis. Additionally, protocols adopted by the various hospitals for sample collection, handling, and storage were not uniform. Nonetheless, RT-PCR analysis resulted in consistent results for all 11 cases of matching feces and blood samples. Furthermore, all blood samples seropositive during the first 20 days after onset of symptoms were also positive in RT-PCR. Of the 48 RT-PCR positive samples collected 21–40 days after onset of symptoms, 45 were also seropositive.

RT-PCR analysis of blood was a less sensitive index of infection than immunologic assays at later time points (21–40 days after onset of symptoms). However, 16% of blood samples and 18% of fecal samples contained SARS-CoV RNA >31–40 days after onset of symptoms. A similar duration of persistence of SARS sequences in stool has been observed by Ren et al. (17). Whether infectious virus is present at these later time points remains to be determined; nonetheless, our findings indicate that long-term monitoring may be required to control dissemination of disease.

Dr. Zhai is a microbiologist and associate researcher of Institute of Microbiology and Epidemiology. His scientific interests are microbial genomics, pathogen discovery, and emerging infectious diseases.

Funding for this work was provided by the Ministries of Health and of Science and Technology (CHINA), the National High Technology Research and Development Program of China (Program 863, No. 203AA208211), the Ellison Medical Foundation, and AI51292 and U54 AI057158 from the National Institutes of Health.

Page created: January 28, 2011
Page updated: January 28, 2011
Page reviewed: January 28, 2011
The conclusions, findings, and opinions expressed by authors contributing to this journal do not necessarily reflect the official position of the U.S. Department of Health and Human Services, the Public Health Service, the Centers for Disease Control and Prevention, or the authors' affiliated institutions. Use of trade names is for identification only and does not imply endorsement by any of the groups named above.