Epidemic meningococcal infection is generally caused by single clones; whether nonepidemic increases in infection are clonal is unknown. We studied the molecular epidemiology of meningococcal infection during a period that the incidence increased in two age groups. Serogroup C and Y meningococcal isolates were analyzed by pulsed-field gel electrophoresis and multilocus sequence typing. From 1992 to 1999, 96.4% (27/28) of serogroup C isolates from persons 15–24 years of age were in clonal group 1, compared with 65.6% (21/32) of isolates from persons ≤14 years, and 64.3% (9/14) of isolates from adults ≥25 years (p ≤ 0.01). The proportion of clonal group 2 serogroup Y strains increased from 7.7% (1/13) in 1992 to 1993 to 52.0% (13/25) in 1998 to 1999 (p < 0.01). The nonepidemic age-specific increases in serogroup C meningococcal infection in Maryland were clonal in nature and the changes in serogroup Y incidence were associated with a shift in the genotypes of strains causing invasive disease.

The molecular epidemiology of Neisseria meningitidis infection has historically been characterized by using multilocus enzyme electrophoresis (MEE) (5,6). Due to the complicated nomenclature and labor-intensive nature of electrophoretic type (ET) determination, alternative methods have been pursued. Recently, multilocus sequence typing (MLST) of housekeeping genes has been shown to highly correlate with ET (7). Pulsed-field gel electrophoresis (PFGE) has also been shown to be a useful method for discriminating between sporadic and outbreak strains (8). We sought to determine whether the genotypes of N. meningitidis causing invasive disease correlated with the epidemiologic trends that were observed in Maryland during the 1990s.

Active, laboratory- and population-based surveillance for invasive meningococcal infection from January 1, 1992, to December 31,1999, performed as part of the Maryland Bacterial Invasive Disease Surveillance project (BIDS), was the subject of this analysis (1,9). BIDS is the Active Bacterial Core Surveillance (ABCs) component of the multistate Emerging Infections Program Network coordinated by the Centers for Disease Control and Prevention (CDC) (10). The surveillance case definition was the isolation of N. meningitidis from a normally sterile body fluid from a Maryland resident (1).

Meningococcal serogroups were determined by the Maryland Department of Health and Mental Hygiene Laboratory Administrations and CDC. Serogrouping was repeated on isolates at the Norwegian Institute of Public Health when the PFGE pattern of a particular isolate was genetically more related to isolates of a different serogroup. If discrepant serogroup results were obtained, the serogroup that was most consistent with the isolate’s PFGE pattern was used in the analysis.

PFGE was performed as previously described (11). Briefly, equal amounts of bacterial suspension and 2% low-melting agarose (Sea Plaque, FMC Bioproducts, Rockland, ME) were pipetted into plug molds and incubated in ESP buffer (0.5M EDTA, 1% N-lauroyl sarcosine, 1 mg/mL proteinase K; pH 8.5–9.3) overnight at 50°C. After being washed 3 times with TE (Tris 0.5M EDTA) buffer at 37°C, the plugs were restricted with 20 U of NheI (New England Biolabs, Beverly, MA), 330 μg/mL of bovine serum albumin, and 200 μL of New England buffer #2 at 37°C overnight. PFGE was performed in a 1% agarose gel with the following run parameters: 1–30 s for 18 h, 5–9 s for 8 h at 14°C. After the gel was stained with ethidium bromide, the image was digitized on the Bio-Rad Gel Doc 2000 System (Bio-Rad, Hercules, CA). Dendrograms of genetic relatedness were created with Molecular Analyst/Multi-Analyst programs (Bio-Rad) by using the unweighted pair group method with arithmetic averages, and a position tolerance of 1.5%.

Statistical analyses and matrix manipulations were performed using SAS (Version 6.12; SAS Institute; Cary, NC) and R for Windows version 1.5.1 (available from: http://cran.r-project.org). Exact tests were performed using StatXact (Version 4.0.1, Cytel Software Corporation; Cambridge, MA). The Dice coefficients were the basis of the pairwise similarity analysis of the serogroup C isolates. In this analysis, the mean and median Dice coefficients were calculated separately for each age group and time period and the distributions of the Dice coefficients among the groups were compared using the Kruskal-Wallis rank sum test. 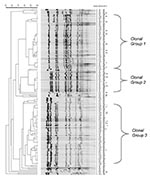 Figure 3. Pulsed-field gel electrophoresis patterns of meningococcal serogroup Y strains isolated from persons >25 years during 1992–1999. Culture date and sequence type are listed to the right of the dendrogram.

From 1992 to 1997, the increasing incidence of invasive meningococcal disease among persons aged 15–24 years of age was caused primarily by a clonal group of serogroup C strains that belonged to the ST-11 complex. These strains were much more genetically related than the serogroup C isolates, which were causing infection in the two other age groups. In general, ST-11 complex strains belong to the ET-37 complex (7), which has been associated with outbreaks and epidemics (8,14). Although the meningococcal incidence decreased in this age group in the late 1990s, a unique PFGE-defined serogroup C clone that had not been previously detected emerged in 1999. Among patients infected with serogroup Y isolates, a shift from one ST-23 Y clonal group to another occurred over time.

The risk of meningococcal infection depends on a variety of strain, host, and environmental factors (15). During epidemics, which are generally clonal, the proportion of cases that occur in adolescents and young adults often rises, in addition to an increased incidence in other age groups (3). This pattern is believed to be caused, at least in part, by the introduction of a new strain to which the population has little immunity. The increase in adolescents and young adults is similar to the pattern we observed in Maryland, although no epidemic was associated with it. Analogous to the epidemic setting, we hypothesized that the increase in those 15–24 years of age was due to the introduction of a serogroup C clone to which this group had not previously been exposed. We expected the increase to be caused in large part by this new clone, as adolescents and young adults typically otherwise have a low risk for meningococcal infection. This is in contrast to younger children and older adults, who in general are more susceptible to meningococcal infection and therefore might be expected to be infected with a broader range of strains, in addition to the newly introduced clone (2,16).

Although our study had not begun early enough to determine whether clonal group 1 serogroup C strains were truly recently introduced into Maryland, the observation that serogroup C infection in those 15 to 24 years of age was caused by more highly related strains generally supports our hypothesis. The emergence of a new PFGE-defined clone in adolescents in 1999 was somewhat surprising since the meningococcal incidence was decreasing in this age group during that time. The shift from one ST-23 complex serogroup Y clonal group to another during the 1990s may also have been due to the changes in population immunity that occur over time because of the circulation of N. meningitidis in the community. However, since we did not study whether the two clonal groups differed in cell surface immunogens, this hypothesis remains speculative.

The molecular epidemiology of meningococcal infection has historically been determined by MEE (3,15). Recently, however, MLST has been validated as an alternative method to MEE. We found that PFGE further discriminated among strains with the same ET. For example, MLST could not discriminate between the two serogroup C PFGE-defined clones in the 1997 and 1999 outbreaks. This finding was similar to those of a recent study in which meningococcal isolates with the same ET were found to have distinct PFGE patterns (8). Taken together, these data indicate that PFGE and MLST are complementary methods for studies of the molecular epidemiology of N. meningitidis infection (8,13).

Dr. McEllistrem is an assistant professor in the Division of Infectious Diseases, Department of Medicine, and a member of the Infectious Diseases Epidemiology Research Unit at the University of Pittsburgh. Her research interests focus on the molecular epidemiology of Streptococcus pneumoniae, Neisseria meningitidis, and Escherichia coli O157:H7.

We thank the participating hospital infection control practitioners and microbiology laboratory personnel in Maryland for identifying the meningococcal cases and providing the bacterial isolates; Yvonne Dean Hibbert and Jackie Hunter for assistance in conducting surveillance; Kim Holmes, Alicia Bustamante, and Laurie Sanza for assistance with data collection; Althea Glenn for processing the isolates; Dale Rohn, John Sweitzer, and Jeff Roche and the staff of the Epidemiology and Disease Control Program of the Maryland Department of Health and Mental Hygiene for their support; Susanna Schmink for performing the serogrouping; and Patrick Moore for his thoughtful review of the manuscript.

This study was funded by Aventis Pasteur, the Centers for Disease Control and Prevention, the State of Maryland, and Research Career Awards (K24 AI52788, to L.H. Harrison and K23 AI01788, to M.C. McEllistrem), National Institute of Allergy and Infectious Diseases.