We correlated outpatient antibiotic use with prevalence of penicillin-nonsusceptible Streptococcus pneumoniae (PNSP), macrolide-resistant S. pneumoniae (MRSP), and macrolide-resistant S. pyogenes (MRGAS) in 20 countries. Total antibiotic use was correlated with PNSP (r = 0.75; p < 0.001), as was macrolide use with MRSP (r = 0.88; p < 0.001) and MRGAS (r = 0.71; p = 0.004). Streptococcal resistance is directly associated with antibiotic selection pressure on a national level.

A global trend of increasing antimicrobial resistance, but with wide variations at national levels, is well-documented in the literature (1). Strong evidence supports an association between antibiotic use and resistance in hospitals (2,3). By contrast, the relationship between antibiotic consumption and resistance has been more difficult to establish for the outpatient setting, although some data suggest a direct correlation for streptococcal infections (4–6). For instance, an ecologic study linked penicillin-nonsusceptibility in Streptococcus pneumoniae with β-lactam and macrolide use in 12 European countries (7). Recently, McCormick et al. have shown that variation in pneumococcal resistance in the United States is best explained by geographic variation in antibiotic selection pressure, rather than by clonal dynamics (8).

Penicillin-nonsusceptible S. pneumoniae (PNSP) and macrolide-resistant S. pneumoniae (MRSP) are markers of resistance to antibiotics commonly used as first-line drugs for respiratory tract infections. Although penicillin-resistant S. pyogenes has never been observed to date, the increasing rates of macrolide-resistant group A streptococci (MRGAS) pose considerable clinical problems in many countries (4). The aim of this ecologic study was to correlate outpatient antibiotic consumption with reported rates of PNSP, MRSP, and MRGAS in 20 countries on three continents.

An ecologic study design was used, which allows measurement of the total (individual and group-level) effect of antibiotic exposure on antimicrobial resistance in streptococci (9). PNSP, MRSP, and MRGAS were chosen as indicator organisms for those effects. National outpatient antibiotic sales data were obtained from published reports, provided by IMS Health Global Services, the National Corporation of Swedish Pharmacies, the Danish Medicines Agency, and the Institute of Public Health in Slovenia (7,10–13). Data for the United States were extracted from IMS data (10). Sales data for total antibiotic use (anatomic therapeutic classification [ATC] group J01) and macrolide use (ATC group J01F) were used to express outpatient consumption in defined daily doses (DDD) per 1,000 inhabitants per day, as recommended by the World Health Organization (WHO) (14).

By using MEDLINE, we performed a systematic search of national and international surveillance studies published in English, French, or German that reported proportional frequencies of PNSP, MRSP, and MRGAS for 1994 to 2000. Representative resistance data from those countries were included for which antibiotic sales data were also available (6,7,10,13,15–34). A time lag of 0 to 2 years between antibiotic sales and ensuing antimicrobial resistance data was considered acceptable for this study. For three countries (Iceland, Finland, and Sweden), the lag time between antibiotic sales data and resistance rates was 0. Studies limited to small geographic areas not representative of a given country and studies limited to particular patient populations were excluded. Nonsusceptibility to penicillin and macrolide resistance included intermediate and high-level resistance. 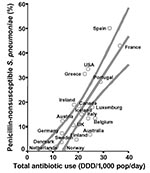 Figure 1. Total antibiotic use in the outpatient setting (vertical axis) versus prevalence of penicillin-nonsusceptible Streptococcus pneumoniae (horizontal axis) in 20 industrialized countries. A regression line was fitted with 95% confidence bands (r...

Figure 2. A. Relationship between macrolide use in the outpatient setting (horizontal axis) and prevalence of macrolide-resistant Streptococcus pneumoniae (vertical axis) in 16 industrialized countries. A regression line was fitted with 95% confidence...

This report correlates national outpatient data about antibiotic use with prevalence of antibiotic-resistant S. pneumoniae and S. pyogenes in Europe, North America, and Australia. The ecologic study design chosen allowed us to evaluate the effect of antibiotic consumption on resistance rates on a national level. A strong relationship was documented between total volume of antibiotic consumption and prevalence of PNSP. An almost linear association existed between macrolide use and proportion of MRSP, a biologically plausible finding that has previously been documented on a smaller scale (6). A weaker, but still significant correlation was found for MRGAS.

We found large differences in resistance rates, even in neighboring countries. A variety of factors are responsible for this, but the selective pressure exerted by inappropriately used antibiotics is likely the most important (35). Indeed, volume of antibiotic use varies widely between countries (12). In previous cross-country comparisons of Germany, France, and the United States (5,30), we suggested that socioeconomic, cultural, and behavioral determinants have a major impact on outpatient antibiotic prescribing practices and resistance prevalence in respiratory pathogens on a national level. In addition, healthcare policies play an important role. In Denmark, for instance, an excessive use of tetracycline was noted, mainly for respiratory tract infections. This situation was corrected by removing subsidization for tetracycline, which resulted in a decrease in its use; this decrease was followed by a parallel decrease in tetracycline resistance among S. pneumoniae and other streptococci (36).

Antibiotic use exerts selective pressure on resistance in respiratory pathogens in several ways (35). Any type of recent antibiotic treatment (not only β-lactam agents) can select PNSP by inhibiting susceptible commensal flora and eradicating penicillin-susceptible pneumococci, thereby indirectly promoting the transmission of PNSP and increasing the prevalence of PNSP in a community or country (9). However, whether decreasing antibiotic use in the community will have a sustained impact on resistance rates is unclear. Antibiotic resistance may take longer to return to previous levels than the time it took for antibiotic resistance to increase after excessive antibiotic use. In Finland in the 1990s antibiotic resistance decreased slowly with substantially reduced antibiotic consumption after an initial rapid increase; such situations may lead to different correlations between use and resistance, depending on whether resistance is rising or falling (32).

This ecologic study has some limitations. First, antibiotic sales data cannot be used synonymously with antibiotic exposure without highlighting the problem of patient compliance, which is very difficult to quantify. However, in case of low compliance, antibiotics may be used later, and this self-medication may also contribute to resistance. Second, large variations in resistance are typically found, depending on the examined age group, with highest resistance rates and largest amounts of antibiotic consumption usually in children. Due to the study design chosen, we could not account for these differences. Third, no single surveillance study was identified that provided sufficient data on national resistance rates for all countries. Therefore, considerable heterogeneity was found among the quality and characteristics of the included surveillance studies. We tried to minimize this bias by excluding publications not meeting certain standards or examining only selected patient populations. Fourth, the type and number of tested organisms varied widely. Thus, sampling bias may have influenced the results of this study. Finally, data are lacking regarding the maximum time lag between antibiotic consumption in the community and possible changes in resistance patterns on a national level. A period of 1 to 2 years seems plausible, although more rapid changes can be observed.

Further studies should be undertaken to extend our analyses to Asian countries that are demonstrating high rates of streptococcal resistance (31). Moreover, monitoring of antimicrobial resistance should be continued on both the regional and national level. An important role may be played by networks such as the European Antimicrobial Resistance Surveillance System. At the same time, disclosure of sales data through pharmaceutical records may help facilitate research in this area. In summary, the data presented in this ecologic analysis suggest an important association between antibiotic consumption and resistance in streptococcal infections and lend support to the validity of efforts by professional organizations and policymakers to discourage overuse of antibiotics in the community.

Dr. Albrich is a fellow in infectious diseases at Emory University School of Medicine, Atlanta, Georgia. His interests include the epidemiology of antimicrobial-resistant pathogens and sociocultural determinants of antibiotic overuse.