We analyzed 64 human metapneumovirus strains from eight countries. Phylogenetic analysis identified two groups (A and B, amino acid identity 93%–96%) and four subgroups. Although group A strains predominated, accounting for 69% of all strains, as many B as A strains were found in persons ≥3 years of age.

Studies from various parts of the world have identified human metapneumovirus (HMPV) as one of the leading causes of hospitalization for acute respiratory tract infections in young children (1–5). Severe respiratory infections associated with HMPV have also been reported in elderly and immunocompromised persons (6,7). Studies from our group (6,8) and others (2,5) have identified two major lineages of HMPV, with some studies indicating the splitting of those groups into subgroups. Recently, the complete genomic sequence of a representative strain from each of the two groups was determined (9). In this study, our objective was to analyze the fusion (F) gene sequences of a large set of HMPV strains collected from various countries over several years and to identify sequence signatures in different HMPV subtypes. 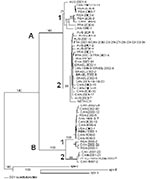 A total of 64 HMPV sequences were analyzed, 34 from Canada (years 1993–2002) and 30 from various other countries (years 2000–2002): Peru (n = 2), the United States (n = 2), France (n = 6), Israel (n = 5), Republic of South Africa (n = 7), Australia (n = 7), and the prototype strain 001 (GenBank accession no. AF371337) from the Netherlands. Phylogenetic analysis of the HMPV F gene showed the existence of two main groups (A and B) that could be further subdivided into two subgroups (1 and 2; Figure 1). Bootstrap analysis strongly supported dividing HMPV into the A and B clusters (100% of bootstrap replicas) as well as subdividing them into B1, B2, and A2 (99%–100% of bootstrap replicas). However, the topology of the tree regarding the A1 subgroup was supported by only 71% of the bootstrap replicas. This result may be explained by the strain AUS-2001-4, which could not be firmly assigned to any of the two A subgroups. In addition, even though the strain CAN-1993-1 was strongly supported as a member of the A1 group by 91% of the bootstrap replicas, it was clearly the most divergent, as can be expected from an older strain. 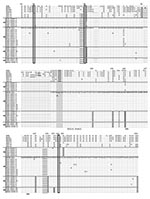 Figure 2. Amino acid sequence alignment of the fusion (F) protein of various human metapneumovirus (HMPV) strains and other paramyxoviruses. Amino acid numbering is based on the sequence of the HMPV strain NETH-001...

An amino acid alignment of all distinct HMPV F sequences (representing amino acids 20–233 of the prototype strain NETH-001), as well as those of other metapneumoviruses and pneumoviruses, is shown in Figure 2. Cysteine residues were conserved at positions 28, 60, and 182 in all HMPV strains. Analysis of this multiple sequence alignment showed six amino acid substitutions found at positions 61, 122, 135, 167, 175, and 233 that may be used as signature sequences to differentiate group A and B strains. In addition, we also identified an amino acid substitution at position 185 that may allow us to differentiate the A1 subtype from others, whereas substitutions specific to B2 subtypes were located at positions 143 and 179. Some of these substitutions were located in potential functional domains, such as the fusion domain (codon 122) and the heptad repeat A (HRA) region (codons 135, 143, and 167). Two potential N-glycosylation sites were found in all HMPV sequences.

Our results, based on a large dataset of viral strains collected over several years from the Northern and Southern Hemispheres, confirm two main HMPV groups and at least four minor subgroups. One strain (AUS-2001-4) could not be ascribed to one of the two A subtypes and may constitute a third subtype. We have further demonstrated that both HMPV genotypes could circulate in a single year during a typical respiratory virus season, i.e., over the winter and early spring months in countries in both hemispheres. Our phylogenetic data were based on analysis of the HMPV F protein, one of two viral glycoproteins considered the major antigenic determinant in RSV (11). Our data confirm that HMPV is more closely related to avian pneumovirus type C than to RSV, which is classified in a separate genus (Pneumovirus) within the same subfamily.

Overall, the amino acid sequence identity of the two HMPV F groups was slightly higher than that calculated for the two RSV groups (93%–96% vs. 89%) (11). Although only the first half of the F gene was sequenced in this study, our data indicate that all A and B strains can be easily differentiated on the basis of unique amino acid changes, some of which are located in functional regions of the protein, e.g., the putative fusion domain and the HRA region implicated in paramyxovirus fusion to their cell receptors. Some of the latter amino acid changes were nonconservative. Of note, the sequence signatures reported here were also present in two other recent Canadian isolates representing the two major HMPV groups (12). Additional studies will be required to evaluate the impact of such changes on pathogenesis and immune response.

Close to 70% of all HMPV strains belonged to group A with a possible shift towards more A2 strains in recent years. However, more young children were evaluated in our study, and the group A genotype infects three times as many children <3 years of age. In addition, group B strains, which occurred more frequently in adults, could have been underestimated, as suggested by the detection of fewer group B strains in clinical samples (16%) than in infected LLC-MK2 cells (54%). In that regard, most HMPV PCR primers designed so far have been selected from the sequence of strain NETH-001 (which belongs to group A2 in this study), and consequently, they may not have been optimal to detect group B strains. Alternatively, isolating HMPV group A strains may be less efficient in LLC-MK2 cells. Additional studies are required to validate these hypotheses. In RSV, group A strains are often thought to be associated with more severe disease than are group B strains (13). However, we found no differences in severity between the two HMPV genotypes when we used pneumonitis as the clinical endpoint in this small, retrospective study.

Our study has some limitations. We analyzed relatively few non-Canadian strains over a short period of time, consistent with the recent description of this viral pathogen in 2001. Also, much more genetic variability could have been observed by sequencing the gene encoding for the attachment glycoprotein (G gene) as suggested by RSV and limited HMPV sequences (14,15). Using different PCR primers to initially identify HMPV and studying different populations in the various centers may have also introduced bias in interpreting our results. Nevertheless, our study confirms the worldwide distribution of HMPV and provides initial insights into the epidemiology of the two main viral genotypes.

Dr. Boivin is an infectious disease specialist and virologist at the Centre Hospitalier Universitaire de Québec. He is also an associate professor of microbiology at Laval University, Québec City, Québec, Canada. His main research interests include the characterization of old and emerging respiratory viruses and the mechanisms of antiviral drug resistance for herpesviruses.