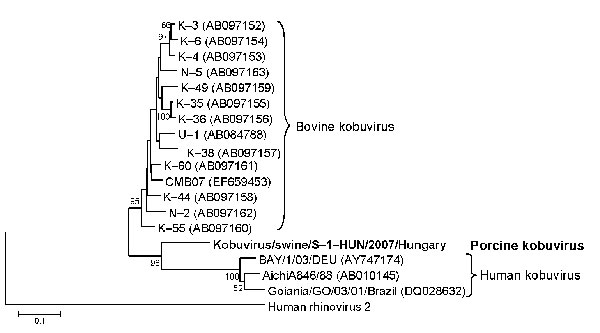 Figure. Phylogenetic tree of porcine kobuvirus (Kobuvirus/swine/S-1-HUN/2007/Hungary, GenBank accession no. EU787450), based upon the 1,065-nt fragment of the kobuvirus 3C/3D regions. The phylogenetic tree was constructed by using the neighbor-joining clustering method; distance was calculated by using the maximum composite likelihood correction for evolutionary rate with help of the MEGA version 4.0 software (10). Bootstrap values (based on 1,000 replicates) for each node if >50% are given. Reference strains were obtained from GenBank. The human rhinovirus 2 strain (X02316) was included in the tree as an outgroup. Scale bar indicates nucleotide substitutions per site.