Hemotrophic mycoplasmas infect a variety of mammals. Although infection in humans is rarely reported, an association with an immunocompromised state has been suggested. We report a case of a Mycoplasma haemofelis–like infection in an HIV-positive patient co-infected with Bartonella henselae.

Hemoplasmas are a group of bacteria that infect animals. They are small epicellular parasites that adhere to the host’s erythrocytes. Diseases caused by these bacteria range from acute hemolytic anemia to asymptomatic infection. It is generally thought that most Mycoplasma spp. are host specific. However, there are occasional reports of infection in an animal species not perceived as primary hosts. These infections may have a pathologic effect, particularly when predisposing conditions, such as immunodeficiency, are present (1). We report a case of Mycoplasma haemofelis–like infection in an HIV-positive patient with disseminated Bartonella henselae infection.

A 34-year-old HIV-positive man was hospitalized in Brazil in September 2006 with a 30-day history of night sweats; loss of appetite; productive cough; muscle pain; and cervical, axillary, and inguinal lymphadenomegaly. Results of pulmonary, cardiovascular, and abdominal examinations were normal. Abnormal lymph nodes were 2 cm in diameter, firm, and not tender. The patient owned 5 cats and showed signs of multiple cat scratches and bites on his hands and arms. He had received an HIV-positive diagnosis 5 years earlier.

Abdominal computed tomography showed hepatomegaly, splenomegaly, and hypoechoic lesions on the spleen. Transesophageal echocardiography showed no lesions compatible with infective endocarditis. An inguinal node biopsy showed granuloma with necrosis suggesting cat-scratch disease, and no signs of acid-fast bacilli or fungi. Many bacilli suggestive of Bartonella spp. were observed by Warthin-Starry staining, and antibodies against B. henselae (titer 256) were detected in serum. Treatment with doxycycline was initiated and symptoms subsequently subsided. The patient was discharged and instructed to continue antiretroviral therapy and oral doxycycline.

In June 2007, the patient was hospitalized with fever, malaise, weight loss, and lymphadenomegaly. Echocardiography showed mitral vegetations. Multiple hepatic hypoechoic lesions were found by abdominal computed tomography. Lymph node biopsy specimens showed tiny bacilli by Warthin-Starry staining. The patient had prematurely discontinued antiretroviral and antimicrobial drug treatment, which may have predisposed him to endocarditis and hepatic peliosis. He was treated with doxycycline and gentamicin for Bartonella spp. infection. His symptoms disappeared and an echocardiogram 17 days later showed resolution of mitral vegetations. He was discharged and instructed to continue antiretroviral therapy and oral doxycycline for Bartonella spp. infection. Ten months after discharge, the patient returned for a follow-up visit while taking recommended therapy. He had no clinical signs and his laboratory findings were improved.

During the patient’s first hospitalization in 2006, blood was collected into tubes containing EDTA and 2 aliquots of DNA were extracted (DNeasy Blood and Tissue Kit; QIAGEN, Valencia, CA, USA) at the Hospital de Clínicas de Porto Alegre. DNA was tested by PCR for Bartonella spp. infection (2) and by additional PCR protocols for feline hemoplasmas, including Mycoplasma haemofelis (3), “Candidatus M. haemominutum” (4), and “Candidatus M. turicensis” (A.P. Santos, unpub. data). These bacteria infect cats and possible infection of this patient was investigated. Positive controls for M. haemofelis included DNA extracted from naturally (GenBank accession no. EU930823) and experimentally infected cats (3). Three positive controls for B. henselae (type 1, type 2, and Houston strain) were used. Negative controls included ultrapure water and DNA extracted from blood of a healthy person and a noninfected cat. All negative controls were negative by PCR. 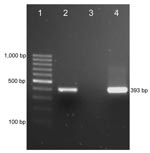 The possibility that the patient’s cats might be involved in zoonotic transmission was also investigated. Two weeks after the patient’s first blood collection, blood was collected from the 5 cats, and DNA was extracted at the Veterinary Hospital of the Universidade Federal do Rio Grande do Sul, Porto Alegre. Two of the cats were positive by PCR for M. haemofelis and all 5 cats were positive for Bartonella spp. The cats were not tested for other infectious agents.

PCRs for hemoplasmas were performed in duplicate at 2 laboratories (Universidade de São Paulo, São Paulo, Brazil and Purdue University, West Lafayette, IN, USA) by using split aliquots. PCR results were reproducible. During the patient’s second hospitalization, the same PCRs were used and the patient was positive for Bartonella spp. but negative for hemoplasmas.

There are no molecular studies to date documenting hemoplasma infection in humans. However, it has been suggested that such infections may be seen in immunocompromised patients (5). A hemotrophic mycoplasma infection was reported in patients with systemic lupus erythematosus (SLE) (6). A 417-bp sequence detected in 1 SLE patient also showed 99% homology with M. haemofelis (7). Sequence data from another hemotrophic mycoplasma infection in an anemic human patient were reported in GenBank. However, the sequence of 178 bp of the 16S rRNA gene (accession no. EU014880) was more closely related to M. suis and M. wenyonii (96%–100%) and only 75% homologous to M. haemofelis (8).

Epidemiologic studies have linked cat bites and scratches and flea-infested cats with transmission of B. henselae to humans (9). B. henselae and B. quintana are causative agents of bacillary angiomatosis, bacillary peliosis, and cat-scratch disease in humans. Peliosis hepatis and lymph node angiomatosis, as seen in this patient, have been associated with B. henselae infection (10). M. haemofelis DNA has also been detected in cat fleas (Ctenocephalides felis); C. felis may be involved in transmission of M. haemofelis among cats (11). Additional studies have documented experimental transmission by administration of infected blood intravenously, intraperitoneally, and orally. Hemoplasma DNA is present in saliva and feces of cats, which suggests that aggressive interactions among cats involving biting may lead to transmission of the organism (12). To our knowledge, there is only 1 other report that cats can be co-infected with M. haemofelis and B. henselae (13).

As with other Mycoplasma spp., hemoplasmas might act as a cofactor in HIV infection, contributing to acceleration of the course of the disease (14). Further studies are needed to establish the role and prevalence of hemoplasma infection in AIDS patients, as well as the zoonotic potential of M. haemofelis.

Dr A.P. Santos is a doctoral candidate at the Veterinary School at Universidade Federal do Rio Grande do Sul and a visiting scholar at Purdue University. Her research interests include infectious diseases and hemoparasites, particularly hemoplasmas.

We thank the Department of Comparative Pathobiology, School of Veterinary Medicine, Purdue University, for laboratory support and Lynn Guptill for providing positive controls for B. henselae.

Page created: July 23, 2010
Page updated: July 23, 2010
Page reviewed: July 23, 2010
The conclusions, findings, and opinions expressed by authors contributing to this journal do not necessarily reflect the official position of the U.S. Department of Health and Human Services, the Public Health Service, the Centers for Disease Control and Prevention, or the authors' affiliated institutions. Use of trade names is for identification only and does not imply endorsement by any of the groups named above.