Among 310 fleas collected from dogs and cats in Germany, Rickettsia felis was detected in all specimens (34) of Archaeopsylla erinacei (hedgehog flea) and in 9% (24/226) of Ctenocephalides felis felis (cat flea). R. helvetica was detected in 1 Ceratophyllus gallinae (hen flea).

Rickettsia felis, the causative agent of the flea-borne spotted fever rickettsiosis, is pathogenic for humans (1–4). Since the first detection of R. felis from midgut epithelial cells of the cat flea, Ctenocephalides felis felis, in 1990 (5), interest in the role of this flea species as its main vector has increased. R. felis has been found in cat fleas on all continents (6). Because R. felis is not lethal for cat fleas and is transmitted transovarially by these fleas (4), C. felis could be a vector and a reservoir of this pathogen. For these reasons, the cat flea was considered the only flea species with a major role in the epidemiology of flea-borne spotted fever rickettsiosis. However, R. felis has been reported in other flea species (4,6–8), and flea-borne spotted fever rickettsiosis is now considered an emerging human infectious disease. We analyzed the presence of R. felis in different flea species collected from naturally infested cats and dogs in different locations in Germany. 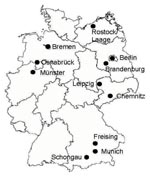 Figure. Locations of the 11 flea-collection study sites in Germany, 2007.

A total of 310 fleas were collected from 49 dogs and 54 cats in 11 widely distributed locations in Germany (Berlin, Munich, Brandenburg, Leipzig, Chemnitz, Rostock/Laage, Bremen, Osnabrück, Münster, Freising, and Schongau) (Figure) in 2007. Specimens collected were recorded and kept at –20°C. Samples were shipped on dry ice to our laboratory, and species identification was performed by using light microscopy and following the determination key of Hopkins and Rothschild (9). Because of infestation variations (1–150 fleas per animal), 3 fleas per animal host were chosen randomly for species differentiation.

Fleas were homogenized individually in 80 μL of phosphate-buffered saline with a RETSCH Tissue Lyser Mixer Mill 300 (QIAGEN, Hilden, Germany) by using 5-mm steel beads. A 100-μL volume of ATL buffer and 20 μL of proteinase K (QIAGEN) were added, and homogenates were incubated at 56°C in an Eppendorf Thermomixer (Eppendorf, Hamburg, Germany) until tissues were completely lysed. DNA was extracted from each flea by using a QIAamp DNA Mini Kit (QIAGEN) according to the manufacturer’s instructions (tissue protocol) and stored at –20°C until used.

All PCR products were separated by electrophoresis on 1.5% agarose gels at 100 V for 60 min and examined under UV light. Positive samples for both genes were purified by using the QIAquick PCR purification kit (QIAGEN) and sequenced by the MWG Biotech Company (Martinried, Germany). Sequences obtained were compared with those of characterized rickettsia in GenBank by using BLAST analysis (www.ncbi.nlm.nih.gov).

Five species of fleas were identified in the study. The most prevalent species was C. felis (93% of fleas in cats and 78% in dogs) (Table 1). Archaeopsylla erinacei (hedgehog flea), was the second most abundant species, with 26 specimens collected from dogs and 8 from cats. A few specimens of Ctenocephalides canis (dog flea), Pulex irritans (human flea), and Ceratophyllus gallinae (hen flea) were also identified (Table 1). Eight dogs had mixed populations of fleas; 5 had C. felis and A. erinacei, 2 had C. felis and C. gallinae, and 1 had C. felis and C. canis. Mixed populations of fleas were also detected in 3 cats; 2 were infested with C. felis and A. erinacei, and 1 with P. irritans and C. felis.

Of 60 fleas positive for the gltA gene (for dogs and cats), only 2 were negative for the ompA and ompB genes. Sequencing analysis of the gltA gene for these 2 samples showed that 1 sequence (from C. gallinae) was 99% homologous with part of the Rickettsia helveticagltA gene (AM418450.1) from an Ixodes persulcatus tick isolated in Russia; the other sequence (from C. gallinae) was 94% homologous with the Rickettsia sp. citrate synthase gene (U76908.1). Thus, we report R. helvetica in C. gallinae ticks.

Of the other 58 gltA-positive samples, 2 were positive for the ompA gene in the first round; 56 fleas were positive for the ompB gene. The 2 ompA-positive samples were sequenced, and sequences matched the ompA gene from R. felis (AJ563398.1; 99%–100% similarity). The 56 positive ompB samples were sequenced, and sequences matched with ompB gene from R. felis (CP000053.1; 98%–100% similarity). All hedgehog fleas (34 specimens) collected were infected with R. felis. Moreover, these 34 specimens were collected from 5 locations within a large area from Berlin (northeastern Germany) to Munich (southeastern Germany). Our findings indicate that A. erinacei may play a major role in the transmission of R. felis in Germany. Recent studies reported R. felis in 1 hedgehog flea in Portugal (13) and in 4 hedgehog fleas in Algeria (8).

Our study confirms that C. felis remains the most common flea species infesting cats and dogs in Germany. Nevertheless, only 24 of 266 cat fleas collected were infected with R. felis. Infected cat fleas were found only in 4 of 11 studied sites, in contrast with a recent study in France, where R. felis–infected C. felis were present in all locations studied (14). In the 4 positive sites in Germany, 3 had positive A. erinacei specimens and 1 had positive C. gallinae (Table 2). In the other sites where no positive fleas where found, only C. felis was present either alone or in association with P. irritans and C. canis (Table 2).

Although C. felis seems to be the main vector of R. felis, our findings indicate that A. erinacei may be a vector for human flea-borne rickettsiosis in Germany. Because hedgehogs may act as a reservoir of pathogens (15), further studies will be conducted to investigate the role of hedgehogs and hedgehog fleas in maintenance and transmission of R. felis in Germany.