To the Editor: In response to a recent report that suggested human infection with Rickettsia japonica in northeastern Thailand (1), we phylogenetically reexamined spotted fever group rickettsiae (SFGR) from Thailand. The organism had been isolated from a male Haemaphysalis hystricis tick found on Mt. Doi Suthep, Chiang Mai, northern Thailand, in December 2001. The strain was designated TCM1 and was not distinguishable from R. japonica by indirect immunoperoxidase stain using monoclonal antibody (2). 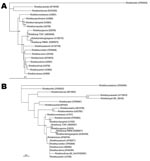 Figure. Phylogenetic analysis based on ompA gene (A) and rickettsial genus–specific 17-kDa antigen gene (B). Sequences were aligned by using the ClustalW software package (http://clustalw.ddbj.nig.ac.jp/top-j.html), and neighbor-joining phylogenetic tree construction and...

After propagating strain TCM1 in L-929 cell culture, we extracted DNA by using a Wizard Genomic DNA Purification Kit (Promega, Madison, WI, USA). We subjected the DNA to sequencing that targeted a 491-bp fragment of rickettsial outer membrane protein A (ompA), a 394-bp fragment of the rickettsial genus–specific 17-kDa antigen gene, and a 1,250-bp fragment of citrate synthase gene (gltA). Direct sequencing of amplicons was performed as previously described (3). Phylogenetic analyses based on ompA indicated that strain TCM1 was closely related to and clustered within the same clade as R. japonica strain YH (98.4% identity) (Figure, panel A). Also, a 17-kDa antigen gene obtained from strain TCM1 showed 99.5% identity to the corresponding gene of R. japonica (Figure, panel B). Our phylogenetic analysis with ompA and 17-kDa antigen gene showed that strain TCM1 was closely related to R. japonica but distinguished from Rickettsia sp. PMK94 (which was closely related to R. heilongjiangensis from northeastern China) (3); another SFGR agent, R. honei from Ixodes granulatus ticks in Thailand (4), was apparently different from strain TCM1 (Figure). Phylogenetic analyses based on gltA (99.4%–99.6% identity) showed that strain TCM1 is also closely related to R. japonica and Rickettsia sp. strain PMK94 (data not shown). Thus, we describe the R. japonica group in Thailand. DNA sequences of strain TCM1 were determined and deposited in GenBank/EMBL/DDBJ under the following accession nos.: ompA, AB359459; 17-kDa antigen, AB359457; gltA, AB359458.

R. japonica is the specific pathogen of Japanese spotted fever, which has been found mainly in southwestern Japan (5). The present strain, closely related to R. japonica, is likely to have been isolated from H. hystricis in Thailand because R. japonica frequently has been isolated, or detected by PCR, from the same tick species in Japan (6). Such tick species–specificity of SFGR should be considered when speculating on any geopathologic relationships of rickettsioses among different SFGR-endemic areas. Previous reports on spotted fever–positive results of human serosurveys (7,8) and on a clinical case (9) in northern Thailand may provide epidemiologic background. In Asia, multiple species of rickettsiea (e.g., R. japonica, R. heilongjiangensis, R. honei) are the causative agents of spotted fever rickettsioses, so the agent closely related to R. japonica could cause spotted fever in Thailand. Additionally, R. japonica has been found in Korea (10), and our current study indicates that R. japonica and its genetic variants are widely distributed in Far Eastern countries, including Japan (Grant-in-Aid for International Cooperative Research, unpub. data). Therefore, the epidemiology and genetic variation of SFGR throughout Asia should be examined by molecular studies.

This work was supported in part by Grant-in-Aid for International Cooperative Research (nos. 13576005 and 19406008) from the Japan Society for the Promotion of Science.