To assess the endemicity of tick-borne pathogens in New Hampshire, we surveyed adult tick vectors. Pathogens were more prevalent in areas of high tick density, suggesting a correlation between tick establishment and pathogen endemicity. Infection rates in ticks correlated with disease frequency in humans.

Along the borders of the northeastern and the upper midwestern United States, black-legged ticks (Ixodes scapularis) are invading new areas (1–3). Because this tick is the principal vector of a number of human pathogens, defining and monitoring its possible expansion are imperative. Little information is available about I. scapularis invasions, including the relative rates of pathogen carriage as vectors expand their range and establish locally enzootic cycles. To assess the endemicity of 3 tick-borne pathogens (Borrelia burgdorferi, Anaplasma phagocytophilum, and Babesia microti) throughout New Hampshire, we surveyed adult I. scapularis vectors. 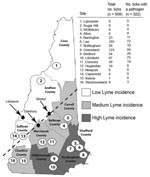 We collected adult ticks rather than the conventionally sought nymphs (6–8) because we believe adults best indicate the pathogen pool in an area. Transovarial transmission of B. burgdorferi is negligible, and I. scapularis ticks acquire infection by feeding on infected hosts as larvae or as nymphs. Because larval ticks feed during late summer and early autumn, they are more likely to feed on migratory animals, such as birds; nymphal ticks feeding in early summer are likely to feed on resident hosts. Hence, adult ticks are more likely to have taken at least 1 resident blood meal from the site of origin, and their Borrelia infection rates (and genotype frequencies) are more representative of endemicity.

We visited each site twice within 1 month (October or November 2007) and sampled each site at each visit for ≈25 minutes. A total of 509 adult ticks were collected by drag-sampling vegetation. As expected, ticks were most abundant at HLI sites and moderate at MLI sites; no ticks were found at the 3 LLI sites, including 2 sites (Newport and Claremont) that were close to where ticks have previously been reported (9). Likewise, we did not find ticks on 6 deer carcasses at hunter check stations in nearby towns (Newport, Danbury, and Bristol).

Ticks were transported to the laboratory, where they were frozen with liquid nitrogen and pulverized in Eppendorf tubes with plastic pestles (Kontes, Vineland, NJ, USA). DNA was extracted using Epicenter Master Complete DNA & RNA Purification Kits (Epicenter Technologies, Madison, WI, USA). Two duplex real-time–PCR reactions were developed (G. Xu et al., unpub. data) by using oligonucleotide primers and Taqman probes for real-time detection of total tick DNA and B. burgdorferi (duplex 1) and A. phagocytophilum–B. microti (duplex 2). The most common pathogen found was B. burgdorferi, followed by B. microti and A. phagocytophilum (Table). A total of 322 (63%) ticks carried at least 1 pathogen, and 40 (8%) ticks carried 2 pathogens. The prevalence of ticks positive for both B. burgdorferi and B. microti was greater than that of ticks positive for both B. burgdorferi and A. phagocytophilum and accounted for most (78%) coinfections. Neither of the observed coinfections (B. burgdorferi–A. phagocytophium, B. burgdorferi–B. microti) differed significantly from its expected random occurrence (contingency table analysis p = 0.487, χ2 p = 0.926).

We found a significantly greater percentage of B. burgdorferi–infected ticks from HLI sites than from MLI sites (Figure 2). B. burgdorferi was twice as common in ticks from the HLI sites. Similarly, B. microti was more likely to be sampled from HLI sites (5.0%) than from MLI sites (2.7%), although this difference was not significant. Linear regression showed a strong correlation (R2 = 0.90) between the entomologic risk index (total number of ticks × proportion of ticks infected [6,8]) in this study and the incidence of human cases of Lyme disease by county in New Hampshire in 2007.

I. scapularis was initially found in New Hampshire in 1985, near the town of Lebanon (9). Lebanon is located in a region where we were unable to sample ticks (Figure 1). It is tempting to hypothesize that I. scapularis was once more abundant in western counties. In 2001, A.T. Eaton noticed a distribution of ticks similar to what we found (10), suggesting that the current distribution has been stable for at least 7 years. Our result that high tick density areas had the highest overall prevalence of pathogens and the highest prevalence of coinfected ticks supports the finding of Hamer et al., who reported a significant difference in the rates of pathogen carriage between recently invaded and I. scapularis–endemic areas (1). The rates of infection we found are similar to those found by Swanson et al. from 5 other northeastern states (11). According to their meta-analysis, ≈40% (± 13%) of 2,109 adult and nymphal ticks were infected with B. burgdorferi, 21% (± 17%) with A. phagocytophilum, and 9% (± 8%) with either B. microti or B. divergens.

A noteworthy exception is the prevalence of A. phagocytophilum. We detected this pathogen at only 1 site (10 positive ticks from Greenland on 2 independent visits). Human anaplasmosis has been a reportable disease in New Hampshire for at least a decade (12), and cases have been rare (0 or 1 reported per year during 1998–2006). However, human anaplasmosis increased substantially in 2007 (3 cases) and 2008 (9 cases).

Human babesiosis appears to be following a similar trend (2 cases in 2005, 3 cases in 2006 and 2007, and 9 cases in 2008), although the disease has been reportable only since 2005. Lastly, we found a strong correlation between entomologic risk index and the incidence of human Lyme disease. This result contrasts starkly with a lack of correlation found by Falco et al. between the abundance of adult female ticks and reported cases of erythema migrans (a common clinical presentation of Lyme disease) in southern New York State (7). Improved reporting of Lyme disease by clinicians to state health officials may be responsible for this discrepancy. The data presented here suggest that ERI estimates using adult ticks are accurate proxies for the yearly incidence of human Lyme disease in regions where Lyme disease is endemic.

Dr Walk is currently an NIH research fellow in the Department of Internal Medicine at the University of Michigan. At the time of this study, he was a postdoctoral research fellow in the Department of Plant, Soil, and Insect Sciences at the University of Massachusetts. His research focuses on the evolutionary ecology of bacterial pathogens that cause human illness, particularly environmental and host dynamics that govern pathogen emergence in natural populations.

This work was supported by grant GM60759 (to S.M.R.) from the National Institutes of Health (NIH).