The genus Bartonella includes a variety of gram-negative, fastidious, hemotrophic bacteria that are transmitted by blood-sucking arthropod vectors. The genus consists of 20 species and 3 subspecies; at least 11 of these species are known or suspected to be pathogenic for humans as causative agents of emerging zoonoses (1).

The following Bartonella spp. have been isolated from wild mice: B. birtlesii (2), B. doshiae, B. grahamii, B. taylorii (3), and B. vinsonii subsp. arupensis and subsp. vinsonii (4). In several countries, the following species have been carried by rats of the genus Rattus: B. elizabethae (5), B. tribocorum (6), B. phoceensis, and B. rattimassiliensis (7). In South Africa, strains genetically related to B. elizabethae also have been isolated from mice of the genera Aethomys and Tatera (8). The main reservoir of B. washoensis is considered to be wild squirrels (9). Of these rodent-associated Bartonella spp., B. elizabethae, B. grahamii, B. vinsonii subsp. arupensis, and B. washoensis have been implicated in the human infections endocarditis (10), neuroretinitis (11), pyrexia and endocarditis (4,12), and myocarditis (9), respectively.

Previous studies have demonstrated high prevalence of infection with Bartonella spp. in wild and peridomestic small animals in Europe (7,13–15), North and South America (5,16–19), Asia (20–23), and Africa (8). Thus, these animals are thought to be reservoirs of several Bartonella spp. and sources of infection for humans.

Many exotic animals are traded as pets around the world and have been imported into Japan without quarantine. However, no data exist on the prevalence of infection with Bartonella spp., especially in exotic pet animals. Our study objectives were to 1) examine the prevalence of Bartonella spp. infection in exotic small mammals imported into Japan from various countries, 2) compare the diversity of these Bartonella strains by analyzing the partial sequence of the citrate synthase gene (gltA), and 3) evaluate the possibility that these mammals may serve as potential reservoirs of zoonotic Bartonella spp.

For this study, 546 exotic small mammals were purchased from trading companies. The animals represented 3 orders and included 6 families, 23 genera, and 28 species (Table 1). They had been imported into Japan as pets from June 2004 through October 2007 from 8 countries in 4 geographic regions: Asia (China, Thailand, and Indonesia), Europe (the Netherlands and Czech Republic), North America (United States), and the Middle and Near East (Egypt and Pakistan). Of the 546 animals, 367 had been captured in their natural environment and 179 had been bred in the exporting countries. Heparinized blood samples were aseptically collected from each animal (anesthetized with chloroform) and centrifuged at 3,000 rpm for 15 min. Plasma was removed and the blood sample pellets were kept at –80ºC until examination.

The blood sample pellets were thawed at room temperature, 100-μL supplemented Medium 199 (24) was added to each pellet, and each sample was mixed well. A 100-μL sample of each mixture was plated on 2 heart infusion agar (DIFCO, Sparks Glencoe, MI, USA) plates containing 5% defibrinated rabbit blood. The plates were incubated at 35ºC under 5% CO2. After 2 weeks of incubation, 2 or 3 colonies with genus Bartonella morphologic characteristics (small, gray or cream-yellow, round colonies) were picked from each plate, confirmed to be gram-negative pleomorphic bacteria, and subcultured using the same conditions used for the original cultures.

The genomic DNA of each isolate was extracted by using InstaGene Matrix (Bio-Rad, Hercules, CA, USA). The extracted DNA was used for PCR analysis of a 312-bp part of the gltA gene to confirm that the bacteria were from the genus Bartonella. PCR was performed by using an iCycler (Bio-Rad) with a 20-μL mixture containing 20 ng extracted DNA, 200 μM of each deoxynucleoside triphosphate, 1.5 mmol/L MgCl2, 0.5 U Taq DNA polymerase (Promega, Madison, WI, USA), and 1 pmol of each primer. The specific primer pair and PCR conditions for gltA were as previously reported (25).

The PCR products were purified by using a commercial kit (Spin Column PCR Products Purification Kit; Bio Basic, Markham, Ontario, Canada). Direct DNA sequencing of the purified PCR products was carried out by using dye terminator chemistry with specific primers (25) and a Model 3130 Genetic Analyzer (Applied Biosystems, Foster City, CA, USA). The 312-bp gltA sequences from the isolates and type strains of established Bartonella spp. in GenBank/EMBL/DDBJ were aligned with the Clustal X program (26), and a phylogenetic tree was drawn, based on the sequence data and using the neighbor-joining method (27) with the Kimura 2-parameter distance method (28) in MEGA 4 (29). Bootstrap analysis was carried out with 1,000 replications (30).

The results were analyzed in 2×2 tables. Chi-square tests were used to examine the statistical significance; p<0.05 was considered significant.

DNA Sequences and Phylogeny of Isolates 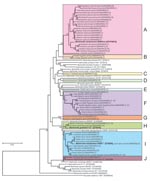 The 407 isolates in this study were classified into 53 genotypes on the basis of DNA sequence analysis of a 312-bp fragment of their gltA genes. The sequence of a genotype from a Cairo spiny mouse was identical to that of the B. elizabethae type strain (GenBank accession no. Z70009) isolated from a human patient with endocarditis (10). The other 52 genotypes were found to be novel genotypes after comparison with known Bartonella spp. The phylogenetic tree of the gltA sequences shows that the 52 novel genotypes are clearly clustered in 10 genogroups, designated A to J (Figure).

Of the 52 novel genotypes, genogroup A, which consisted of 21 genotypes (AB444954 to AB444974) isolated from 7 squirrel species, was related to B. washoensis strain Sb944nv (AF470616), which was isolated from a California ground squirrel (Spermophilus beecheyi) and was genetically identical to an isolate from a human patient with myocarditis (9). The sequence similarities of these genotypes and B. washoensis strain Sb944nv ranged from 94.2% to 97.4%. Genogroup A contained B. washoensis–like genotypes; the genotypes from each squirrel species formed a separate clade, except for the genotypes from Richardson’s ground squirrels (Sp. richardsonii) and Columbian ground squirrels (Sp. columbianus), which formed a mixed clade (Figure).

The 10 novel genotypes in genogroup I were isolated from 9 animal species, and the sequence similarities between the genotypes (AB444995 to AB445005) and B. elizabethae type strain (F9251) ranged from 95.5% to 98.7%. The DNA sequences of gltA of the 3 isolates from a Cairo spiny mouse (AB445000) were identical to that of B. elizabethae (F9251). The sequences of the 13 isolates from lesser Egyptian jerboas were identical to those of the 16 isolates from greater Egyptian jerboas.

In genogroup J, a unique genotype (AB445006) was isolated from an American red squirrel (Tamiasciurus hudosonicus); it had 96.2% sequence similarity to B. clarridgeiae type strain (Houston-2), whose natural reservoir is cats (Figure).

We report prevalence of bartonellae in exotic small mammals imported into Japan as pets. We found that 26.0% (142/546) of the animals examined had bartonellae in their blood. Prevalence among wild captive animal species was high (37.3%), significantly higher (p<0.001) than that among animals from breeder facilities. Of the 179 animals (representing 9 species) from breeder facilities, only 5 Siberian chipmunks imported from a Chinese breeder were found to carry bartonellae, and these were of the same genotype as bartonellae from wild captive animals. These results suggest that animals in breeder facilities may be maintained under hygienic conditions from birth to export, so they rarely have contact with wild animals or blood-sucking arthropod vectors.

Most isolates from animals in the family Sciuridae (58.7%; 122/208) were in genogroup A and showed high sequence similarity to B. washoensis. Kosoy et al. (9) have reported that B. washoensis is widely distributed in ground squirrels in the western part of the United States and that it was isolated from a human with myocarditis in Nevada, USA. Thus, captive squirrels carrying B. washoensis–like organisms could serve as a source of infection for humans.

The sequence similarity of the gltA sequence (312 bp) of the B. clarridgeiae–like genotype isolated in our study to that of the strain isolated from the yellow-necked mouse (AF391788) was relatively high (97.7%). Recently, B. rochalimae, a B. clarridgeiae–like organism, was isolated from a human patient with bacteremia, fever, and splenomegaly (32). The B. clarridgeiae–like strain from the American red squirrel in this study also showed high gltA sequence similarity (96.8%) with that of B. rochalimae strain BMGH. Studies will be required to clarify the pathogenicity of B. clarridgeiae–like organisms for humans. Such studies would include 1) evaluation of the organisms’ ability to invade human erythrocytes and/or endothelial cells, 2) demonstration of the presence and expression of the genes of type 4 secretion systems (VirB/VirD4 or Vbh) and Trw, and 3) comparisons of the entire genome sequences of the organisms and with those of other human pathogenic Bartonella spp.

In the present study, 17.6% (25/142) of exotic animals were infected with different Bartonella genotypes or genogroups. In particular, 3 isolates from a greater Egyptian jerboa were classified in 3 different genotypes. Of the 25 Bartonella-positive animals, 13 showed co-infection with different Bartonella genogroups. Of these 13 animals, 12 carried B. elizabethae–like strains in genogroup I. In contrast, strains with identical gltA sequences were isolated from 2 different animal species, such as greater Egyptian jerboas and lesser Egyptian jerboas, Siberian chipmunks and Hokkaido squirrels, and fat-tailed gerbils and fat sand rats. These findings suggest that some Bartonella species have a wide host range and may be transmitted horizontally by some blood-sucking arthropod vectors with low host specificity.

In summary, we examined the possibility that exotic small mammals may be reservoirs of zoonotic Bartonella spp. around the world. The animals in this study carried, at high prevalence, several Bartonella spp. that are human pathogens. Novel species were suggested by the fact that some of the genotypes in 6 genogroups (B to G) showed relatively low similarity (<94.6%) to known Bartonella spp. and formed independent clusters according to phylogenetic analysis based on partial gltA sequences. More taxonomic studies should sequence other housekeeping genes, such as rpoB, 16S rRNA, ftsZ, groEL, and ribC, to confirm whether these isolates are novel Bartonella spp. (34). To prevent human infections by Bartonella spp. carried by exotic small mammals, a quarantine system for these animals should be established as early as possible. Further studies will be necessary to clarify the route of transmission among exotic small mammals and to evaluate the pathogenicity for humans and animals of the isolates belonging to novel Bartonella genotypes found in this study.

Dr Inoue is a PhD candidate graduate student in the Department of Veterinary Medicine, College of Bioresource Sciences, Nihon University, Japan, and a research assistant at Nihon University Veterinary Research Center. His primary research interests are the epidemiology, ecology, and prevention of bacterial zoonoses.