Human bocavirus (HBoV) and HBoV2, two human bocavirus species, were found in 18 and 10 of 235 nasopharyngeal aspirates, respectively, from children hospitalized with acute respiratory tract infection. Our results suggest that, like HBoV, HBoV2 is distributed worldwide and may be associated with respiratory and enteric diseases.

Acute respiratory tract infection (ARTI) is a leading cause of illness and death in infants and young children (1). Human bocavirus (HBoV) was first identified in respiratory samples from children and was proposed to be pathogenic in humans (2). Subsequently, HBoV infections were reported in children with ARTI (1,3,4), and found in stool samples from children with gastroenteritis worldwide (5). In 2009, Kapoor et al. identified another human parvovirus that was most closely related to HBoV and named it HBoV genotype 2 (HBoV2) (6). In this study we examined its presence in nasopharyngeal aspirates (NPAs) from children hospitalized with ARTI.

NPA samples were collected from 235 children hospitalized with ARTI at the First Hospital of Lanzhou University, Gansu Province, China during December 2007–November 2008. All patients were <15 years of age, and informed consent was obtained from their parents. Demographic data and clinical findings were recorded. The study protocol was approved by the hospital ethics committee.

DNA and RNA were extracted from the NPAs by using QIAamp DNA and QIAamp viral RNA mini kits (QIAGEN, Beijing, China). The cDNA sample was synthesized by using random hexamer primers. A standard reverse transcription–PCR was used to screen for human rhinovirus, respiratory synctial virus (RSV), influenza virus A, influenza virus B, parainfluenza virus 1–3, human metapneumovirus, human coronavirus (HCoV)–NL63, and HCoV-HKU1, and PCR method was used to screen for adenovirus (ADV) (7–11).To screen for HBoV, PCR was performed by using primers 188F and 542R, as described by Allander et al. (2). For HBoV2, nested PCR was performed with sf1/sr1 and sf2/sr2 primers, which amplified a 455-bp fragment of the partial NS1 gene, as described (6).

In addition, we designed HBoV2 forward (SN1: 5′-ACCAGTGGGAGAACCACAAG-3′) and reverse (SN2: 5′-GGCATTTGTTTCCATGCTTT-3′) primers, which produced a 563-bp fragment of the NP1 gene of HBoV2. Positive and negative controls were included for each PCR. Purified PCR products were sequenced by using SinoGenoMax. ClustalX (ftp://ftp-igbmc.u-strasbg.fr/pub/ClustalX) was used to align the obtained sequences with sequences available in GenBank. 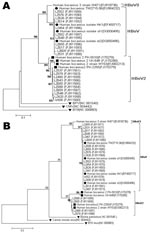 In total, 260 viruses were identified in 196 (83.4%) of the 235 children. Using nested PCR, we found 21 positive specimens; further nucleotide sequence analysis showed that 10 (4.3%) were HBoV2 and 11 were HBoV (Figure, panel A). All 11 HBoV strains detected by using HBoV2 nested-PCR were included in the 18 HBoV-positive patients as determined by PCR using primers 188F and 542R. Of the 10 HBoV2-positive patients, 7 (70%) were co-infected with other respiratory viruses, including 4 patients with RSV. Of the 18 HBoV-positive patients, 12 (66.7%) displayed co-infections. There were no statistically significant differences in the HBoV2 and HBoV detection (p = 0.119 by χ2 test) and co-infection (p = 1.000 by Fisher exact test) rates.

Using nested PCR and sequencing, we identified HBoV2 infections in 10 (4.3%) of 235 NPAs from children hospitalized with ARTI. Most of the patients were <3 years old. In HBoV2-positive patients, co-infection was high (70%), with RSV being the most common co-pathogen. Primers SN1 and SN2 were designed to detect the NP1 gene in the 10 HBoV2-positive patients. However, only 4 gave positive results, which occurred because of the low PCR sensitivity with this pair of primers and because the NP1 gene of HBoV2 is divergent, as described (6). Furthermore, as previous studies (6,12) pointed out, potential recombination upstream from the NP1 gene may explain the lower detection. Phylogenetic analysis showed that the NS-1 region of the HBoV2 strain (LZ480 and LZ578) clustered closely with that of the HBoV2 PK-2255 strain (FJ170279), and the NP-1 region clustered closely with that of the HBoV2 W153 strain (EU082213), suggesting potential recombination in the HBoV2 strains (Figure). In addition, 11 HBoV sequences were amplified by using nested-PCR for HBoV2. In the future, HBoV2-specific primers should be designed to investigate the prevalence of HBoV2 and its potential association with disease.

We found no difference in the clinical symptoms or length of hospital stay between the groups with HBoV2 and HBoV monoinfection, as well as between the groups with HBoV2 monoinfection and HBoV2 co-infection (Table 1). Statistical analysis indicated that HBoV2 and HBoV co-infection obviously did not correlate with disease severity (data not shown). Two of 3 patients with HBoV2 monoinfection had diarrhea with no vomiting (Table 1), and only 1 of 10 patients who were HBoV2 positive vomited. Further investigation is needed to exclude oral or inhaled gastric viruses as possible sources of NPA-associated HBoV2. Phylogenetic analysis showed a high degree of similarity between HBoV2 sequences found in China and those in other areas (Figure). Our results suggest that like HBoV, HBoV2 is distributed worldwide and may be associated with respiratory and enteric diseases. Additional studies are needed to confirm the association between human bocavirus species (HBoV2 and HBoV) and respiratory tract infections or other diseases.

Ms Song is a medical student in the Department of Pediatrics, First Hospital of Lanzhou University. Her research interests are the etiology of respiratory tract infections of children.

We thank Xin-Hui Yuan, Yu-Ning Li , and Rong-Fang Zhang for their assistance in this study.