To the Editor: Dengue viruses (DENVs) belong to the genus Flavivirus (family Flaviviridae) and exist as 4 antigenic types, serotypes 1–4, each with well-defined genotypes. Dengue virus is associated with clinical manifestations that range from asymptomatic infections and relatively mild disease (classic dengue fever) to more severe forms of dengue hemorrhagic fever and dengue shock syndrome. Dengue has become one of the most serious vector-borne diseases in humans. The World Health Organization estimates that 2.5 billion persons live in dengue-endemic areas and >50 million are infected annually (1).

In 1986, dengue virus type 1 (DENV-1) caused an outbreak in the state of Rio de Janeiro and has since become a public health concern and threat in Brazil. (2). In 1990, DENV-2 was reported in the state of Rio de Janeiro, where the first severe forms of dengue hemorrhagic fever and fatal cases of dengue shock syndrome were documented. The disease gradually spread to other regions of the country (3). In 2002, DENV-3 caused the most severe dengue outbreak in the country and sporadic outbreaks continued to be documented through 2005 (4). 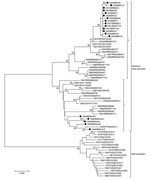 A study conducted by Aquino et al. (7) showed that Paraguayan DENV-2 strains could be grouped as 2 distinct variants within the American/Asian genotype, thus further supporting that the introduction of new DENV-2 variants may likely associate with the shift of dominant serotypes from DENV-3 to DENV-2 in 2005 and might have caused an outbreak of DENV-2. Our results are consistent with this scenario because was a shift of a dominant serotype from DENV-3 to DENV-2 that was observed in 2008 in Rio de Janeiro. However, other factors, such as immunity level to DENV-3 and DENV-2, could explain the shift of dominant serotype besides the circulation of a new viral variant.

Because the dengue outbreaks of 2007 and 2008 were the most severe of the dengue infections in Brazil in terms of number of cases and deaths, this genetically distinct DENV-2 could have contributed to this pathogenic profile. Additionally, these samples came from disperse locations in Rio de Janeiro and we do not believe that there is a clustering issue in our sampling. However, again, other factors must be considered as contributors to this scenario because of the intrinsic properties of this distinct virus, host susceptibility, and secondary cases of infection.

In addition, detailed examination of amino acid sequences of Brazilian DENV-2 strains isolated in 1998 and 2008 showed 6 aa substitutions in the envelope gene: V129I, L131Q, I170T, E203D, M340T, and I380V. Our results support the notion that aa positions at 129 and 131 in the envelope gene are critical genetic markers for phylogenetic classification of DENV-2 (7–9).

Notably, residue 131 in the envelope gene is located within a pH-dependent hinge region at the interface between domains I and II of the envelope protein. Mutations at this region may affect the pH threshold of fusion and the process of conformational changes (10).

Our results suggest the circulation of genetically different DENV-2 in Brazil and that these viruses may have a role in severity of dengue diseases. These findings can help to further understand the complex dynamic pathogenic profile of dengue viruses and their circulation in dengue-endemic regions.