We report an unusual case of human babesiosis in Finland in a 53-year-old man with no history of splenectomy. He had a rudimentary spleen, coexisting Lyme borreliosis, exceptional dark streaks on his extremities, and subsequent disseminated aspergillosis. He was infected with Babesia divergens, which usually causes bovine babesiosis in Finland.

Babesiosis is an arthropod-transmitted infection caused by an apicomplexan parasite. Most zoonotic cases in humans have been reported from the eastern coast of the United States, where the causative agent is Babesia microti, which is transmitted from white-footed mice to humans by Ixodes scapularis ticks (1,2). Rare cases of human babesiosis caused by B. divergens have been reported in Europe. B. divergens is a bovine parasite transmitted mainly by I. ricinus ticks. Both Ixodes spp. ticks also transmit Borrelia burgdorferi, the etiologic agent of Lyme borreliosis. In certain areas of the United States, >10% of patients with a diagnosis of Lyme disease are co-infected with B. microti (3). Co-infections with Borrelia spp. and B. divergens infections have been documented only serologically (4).

Babesia sporozoites are transmitted to the vertebrate host by a tick bite (5). The sporozoites invade erythrocytes and transform into ring-form trophozoites and typical Maltese cross assemblies of merozoites. Parasites lyse infected erythrocytes, which release merozoites that can invade new erythrocytes (6,7). Trophozoites can alternatively develop into gametocytes, enabling continuation of the life cycle in the tick after it has had a blood meal.

Most disease manifestations of human babesiosis are related to hemolysis (1). Symptoms are anemia, malaise, fever, chills, myalgia, and fatigue. High parasitemia levels can cause massive hemoglobinuria, acute renal tubular necrosis, and renal failure. In addition to hemolysis-associated manifestations, acute respiratory distress syndrome may occur as a complication and lead to death (8). B. divergens infections in Europe have been severe, and the mortality rate is high (42%) compared with that of B. microti infections in the United States (5%–20%) (1,2,9). All 22 published cases of B. divergens infection in Europe have occurred in patients who have undergone splenectomy (2). We report an unusual case of human babesiosis in Finland.

A 53-year-old man was admitted to South Karelia Central Hospital in Lappeenranta, Finland, in September 2004 with septic shock. The patient had a history of severe alcohol-induced pancreatitis (in 1993), subsequent type 1 diabetes mellitus, Staphylococcus aureus septicemia (in 2000), and atherosclerosis. He had had fever, back pain, and fatigue for a week before admission and reported that his urine was darker and lower in volume than usual for several days. The patient had no history of travel abroad in the past 5 years. 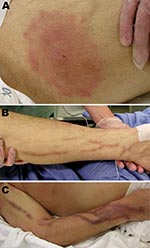 Figure 2. Giemsa-stained smears of peripheral blood of the patient infected with Babesia divergens, Finland, 2004. Intraerythrocytic parasites are indicated by arrows (A), and a representative Maltese cross form of the parasite is...

The patient was treated with intravenous quinine (1,000 mg 3×/d for 12 days), clindamycin (600 mg 4×/d for 12 days), and cefotaxime (2 g/d for 12 days). At the end of day 2, a 9-liter blood exchange was performed. Despite these procedures and reduction of the high level of parasitemia (to 1% within 2 days), the patient had hypotension and was treated in the intensive care unit in a respirator under propofol-based sedation. At day 9, he had pulmonary aspergillosis (infection with Aspergillus fumigatus), S. epidermidis in blood cultures, and Candida albicans cultured from the tip of his dialysis catheter. After the patient received a diagnosis of multiple organ failure, treatment was terminated on day 12; he died the same day. Histologic analysis of autopsy specimens showed aspergillosis in the lungs, heart, and kidneys. The spleen was rudimentary, and no malignancy was found. The patient was HIV negative.

We report an unusual human case of babesiosis and provide molecular evidence that the causative organism was B. divergens. Human babesiosis has not been previously reported in Finland. Eight fatal cases of babesiosis have been described in Europe (1 each in the former Soviet Union, France, Spain, and the former Yugoslavia, and 4 in the British Isles) (2,11). All cases were B. divergens infections in patients who had undergone splenectomy. This species has been identified by inoculation into animals or by serologic analysis. 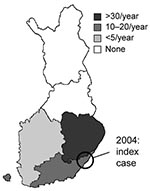 Appendix Figure. Municipality in Finland where human babesiosis infection (index case) was acquired and 3 bovine babesiosis cases were found in 2004. Average annual number of cases of babesiosis in cattle during 1997-2003...

Bovine babesiosis is endemic to Finland, although its incidence has dramatically decreased over the past 2 decades. Monthly data for bovine babesiosis in Finland are obtained by municipal veterinarians who send reports to the Ministry of Agriculture and Forestry (T. Aaltonen, unpub. data). Three cases of bovine babesiosis were reported to health authorities in the municipality where the patient lived in the same year he was infected and became ill (Appendix Figure). The patient lived in the country next to a cattle farm. He took walks and worked in the forest nearby. Because the patient had no travel history, we conclude that babesiosis was acquired in Finland, and, most likely, locally from the zoonotic reservoir of B. divergens in cattle through a tick bite (Table). This conclusion is supported by the presence of ECM and a tick bite on the thigh of the patient. Infection with Babesia sp. and Borrelia sp. from the same tick bite is likely because ECM and babesiosis caused by B. divergens are manifested 3–30 days and 7–21 days, respectively, after a tick bite.

The poor outcome of the patient can be explained by several factors. His immune system was not intact. He also had diabetes, which impaired his general immunity. Although he had not undergone splenectomy, he was also considered asplenic because only a rudimentary spleen was found by autopsy. The rudimentary spleen may have been caused by severe pancreatitis or by high consumption of alcohol (12). Invasive aspergillosis, which is usually seen only in severely immunocompromised patients, also developed in the patient. The origin of dark streaks on his arms and legs is not clear but was probably caused by massive intravascular hemolysis, which was also suggested by dark urine.

Ms Haapasalo is a scientist at the Haartman Institute, University of Helsinki, Helsinki, Finland. Her research interest is microbial pathogenesis, specifically the role of innate immunity in parasitic and bacterial infections.

This work was supported by the Academy of Finland (project 128646), the Sigrid Jusélius Foundation, and Helsinki University Central Hospital.