We report a patient in Japan infected with Cryptococcus gattii genotype VGIIa who had no recent history of travel to disease-endemic areas. This strain was identical to the Vancouver Island outbreak strain R265. Our results suggest that this virulent strain has spread to regions outside North America.

Multilocus sequence typing can be used to divide this species into 4 molecular genotypes, VGI–VGIV, which differ in epidemiology and virulence (1,2). C. gattii was believed to be restricted to tropical and subtropical areas such as Australia, Southeast Asia, and South America (1). However, in 1999, a C. gattii infection outbreak occurred on Vancouver Island, British Columbia, Canada (3), which has a temperate climate.

During the Vancouver Island outbreak, most human, animal, and environmental isolates obtained belonged to VGIIa (major genotype, 90%–95% of isolates) and VGIIb (minor genotype, 5%–10% of isolates) (2,3). These strains have now spread to mainland British Columbia and the Pacific Northwest region of the United States (1,4,5). The potential for further spread of this strain, particularly the VGIIa genotype, is a serious concern because it is highly virulent in mammals and can infect immunocompetent persons (2).

We report a case of cerebral cryptococcoma caused by C. gattii VGIIa (a strain identical to the Vancouver Island outbreak major genotype strain R265) in a patient from Japan who had no recent travel history to known disease-endemic areas.

In 2007, a 44-year-old man (sign painter) from Japan who was not infected with HIV came to the University of Tokyo Hospital with a 2-month history of headache and loss of right-sided vision in both eyes (right homonymous hemianopsia). He had had a diagnosis of hyperglycemia 3 years before admission but had declined to seek medical treatment. His medical history was otherwise unremarkable. He was an ex-smoker who rarely consumed alcohol and was not taking any prescription medications (including corticosteroids or other immunosuppressive drugs). He had traveled to Guam in 1990 and Saipan in 1999 and had no other history of overseas travel. He reported exposure to his dog, and he did not spend time in wilderness areas. The patient often worked near construction sites in urban locations.

When hospitalized, the patient was afebrile and had stable vital signs. Physical examination showed agraphia (inability to write), anarithmia (inability to count numbers), right homonymous hemianopsia, and Romberg sign. Laboratory evaluations showed increased glucose (367 mg/dL) and hemoglobin A1c (10.5%) levels. Results of a complete blood cell count and hepatic and renal function tests were within normal limits. Levels of electrolytes and C-reactive protein were also within normal limits. Results of a test for antibodies to HIV-1/2 were negative. 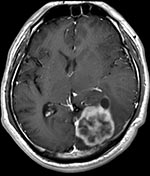 Figure. Postcontrast T1-weighted magnetic resononance image of the brain of a 44-year-old man with cerebral cryptococomma in Japan, 2007, showing a rim-enhancing lobulated mass (lower right) with surrounding edema in the left...

The brain mass was completely resected because it was suspected to be a tumor. Pathologic evaluation of the resected specimen showed that the mass was a large abscess containing encapsulated yeast. The yeast could be seen after staining with periodic acid–Schiff and Grocott methenamine silver stains. Specimen cultures were positive for Cryptococcus spp. and led to a diagnosis of cerebral cryptococcosis.

The patient was treated with liposomal amphotericin B (4 mg/kg/d for 3 weeks) and flucytosine (100 mg/kg/d for 3 weeks). A cerebrospinal fluid (CSF) sample obtained by lumbar puncture soon after mass resection showed a slightly increased protein level but no leukocytosis or a low glucose concentration. Fungal cultures of the CSF showed negative results. Cryptococcal antigen titers were >512 in serum and 64 in CSF.

After 3 weeks of induction therapy, the patient received consolidation and maintenance therapy (oral fluconazole, 400 mg/d) for 1 year. The pulmonary nodule decreased in size after antifungal treatment, suggesting that this lesion was a pulmonary cryptococcoma. At the 1-year follow-up visit, the cerebral cryptococcoma had not recurred, and the pulmonary nodule had disappeared.

The cryptococcal strain isolated from the brain was identified as serotype B by slide agglutination test (6) and identified as C. gattii by rRNA gene sequence analysis (7). Eleven unlinked loci (SXI1, IGS, TEF1, GPD1, LAC1, CAP10, PLB1, MPD1, HOG1, BWC1, and TOR1) analyzed by multilocus sequence typing, according to the method of Fraser et al. (2), were identical to those of the Vancouver Island major genotype strain R265 (genotype VGIIa) (Table) (2,8,9). MICs of this isolate were 0.125, 0.5, 1.0, and 0.011 µg/mL for amphotericin B, flucytosine, fluconazole, and itraconazole, respectively.

Japan has not been considered a C. gattii–endemic area. There have been only 2 reports of C. gattii infections in Japan; both infections apparently originated in Australia (10,11). Retrospective surveillance studies found no evidence of C. gattii infection or colonization in Japan (12; Ministry of Health, Labor and Welfare of Japan, 2003, unpub. data). Although the source of the infection in the patient reported here has not been identified, it appears to have originated in Japan. Infections with C. gattii have not been reported in the places the patient had visited (Guam and Saipan) (13,14). Analysis of persons who traveled to Vancouver Island indicated that the median incubation period of C. gattii infection is 6–7 months (range 2–11 months) (13), although an incubation period of 13 months has been reported for 1 patient (14).

C. gattii genotype VGIIa may have been present in the Pacific Northwest region of the United States long before the Vancouver Island outbreak (2,4). However, no human cases were identified in the United States until January 2006 (4,5). Genotype VGIIa has now spread from Vancouver Island to mainland British Columbia and the Pacific Northwest region of the United States, possibly because of human activity or animal migration (1). However, this genotype has not been reported in any other region, although similar isolates have been obtained from South America (1) and from patients who had traveled to affected areas (1,8). Thus, our findings indicate possible global dispersal of this strain.

Our results suggest that C. gattii VGIIa genotype may be spreading. In North America, this genotype has been isolated from various environmental specimens such as tree surfaces, soil, water, and air (1,4). Soil is believed to be a major potential reservoir of this organism (1,15). Thus, ecologic and environmental studies on C. gattii in Japan are needed to determine likely reservoirs and to improve understanding of C. gattii epidemiology. Although many clinical laboratories in Japan currently do not differentiate between C. neoformans and C. gattii infections, identification of cryptococcal isolates to the species level, especially in apparently immunocompetent patients, is needed.

Dr Okamoto is a chief resident in the Department of Infectious Diseases at the University of Tokyo Hospital. His research interests are infections in immunocompromised patients and fungal infections.­­­

This study was supported in part by a Health Science Research grant for “Research on Emerging and Re-emerging Infectious Diseases” to T.S. from the Ministry of Health, Labor, and Welfare of Japan.