To determine the usefulness of noninvasive cutaneous swab specimens for detecting rickettsiae, we tested skin eschars from 6 guinea pigs and from 9 humans. Specimens from eschars in guinea pigs were positive for rickettsiae as long as lesions were present. Optimal storage temperature for specimens was 4°C for 3 days.

Rickettsiae are a group of obligate, intracellular, gram-negative bacteria. The family Rickettsiaceae includes the genera Rickettsia and Orientia (1). Rickettsiae are transmitted to humans by arthropods (2) and cause diseases characterized by fever, headache, rash, and vasculitis (3). An infection eschar is commonly found at the site of the arthropod bite because of local multiplication of the bacteria. Incidence of infection with rickettsiae is increasing worldwide (4) in certain disease-endemic foci, and seasonal, sporadic (5,6), and occasionally epidemic forms have been reported (7). Over the past 20 years, advances in molecular techniques and cell culture have facilitated identification of Rickettsiales, and new species and diseases have been described (4,8). Recently, a new Rickettsia species, 364D, was identified in patients from California (9).

Eschar biopsies are used for detection of Rickettsia spp., but this technique is invasive and painful for patients and is difficult to perform for certain areas of the body. Successful diagnosis in patients by using rapid, noninvasive, and painless techniques is beneficial. One study reported the usefulness of swabs of skin lesions in the diagnosis of 3 cases of Queensland tick typhus and 1 case of African tick bite fever (10). In addition, eschar crust samples were useful in the diagnosis of 1 case of infection with Orientia tsutsugamushi, the infectious agent of scrub typhus (11). To evaluate the potential usefulness of swabs of skin lesions for rickettsial diagnosis, we evaluated this procedure for eschars from 6 guinea pigs and 9 patients.

The animal study was conducted beginning in February 2009, and the human study was conducted beginning in June 2009. R. conorii, R. akari, R. rhipicephali, R. africae, R. parkeri, and O. tsutsugamushi were grown in L929 cell monolayers, purified, and titrated as reported (12). A suspension of each rickettsial species (200 μL containing 1 × 105 rickettsia) was injected intradermally into 8 shaved areas on the backs of 6 Hartley guinea pigs (1 species/guinea pig) by using aseptic procedures (12). A negative control guinea pig was infected with 200 μL (1 × 106 cells/mL) of an L929 cell suspension. Infection sites were inspected daily for skin lesions. Animals were handled according to the regulations of Décret No. 887–848 du 10/19/1987, Paris. The experimental protocol was reviewed and approved by the Institutional Animal Care Committee, Université de la Méditerranée, Marseille.

Infection with each rickettsial species caused an eschar at the infection site (12). Eschars were observed at day 3 postinfection. A sterile cotton swab (Copan Italia S. p. A., Brescia, Italy) was rotated against the eschar (3 circular motions) and stored at 4°C for 24 h. Swabs were then placed in 400 μL of phosphate-buffered saline, and DNA was extracted by using the QIAamp DNA Mini Kit (QIAGEN, Hilden, Germany). Lesions were swabbed daily until the animal showed clinical recovery (day 20 postinfection for those infected with R. akari, R. conorii, and R. rhipicephali and day 13 postinfection for those infected with R. africae, R. parkeri, and O. tsutsugamushi). 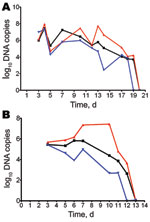 Figure 2. Effect of temperature (A), storage time (B), and temperature and storage times (C–E) on yield of rickettsial DNA, Marseille, France. Guinea pigs (n = 3) were infected with Rickettsia conorii and...

To demonstrate the usefulness of skin lesion swabs for detection of rickettsial infection, we used this technique with eschars from patients with suspected rickettsioses. Nine patients were included in this experiment after informed consent was obtained. This experiment was reviewed and approved by the local ethics committee (reference 09–016). DNA was extracted from swabs or skin biopsy specimens and tested by quantitative PCRs (qPCRs) (13) specific for a fragment of the citrate synthase A gene, which is conserved among spotted fever group rickettsiae, or the gene coding periplasmic serine protease of O. tsutsugamushi; β-actin gene was used as a control (14).

When rickettsial DNA was amplified in samples, specific qPCR was performed by using specific primers and probes and on the basis of clinical and epidemiologic data (Technical Appendix Table 1 ) (4). If specific rickettsial DNA was not detected, PCR amplification and sequencing were performed to identify the causative agent (4,15). R. montanensis DNA was used as a positive control, and DNA from sterile biopsy samples and sterile water were used as a negative control.

Our study showed the efficacy and reliability of skin lesion swabs for molecular detection of 6 Rickettsia species (Figure 1). Rickettsial DNAs were detected by using this technique as long as eschars persisted (<19 days). For short-term storage of swabs, 4°C was the optimal temperature. Using swabs of eschars, we made a diagnosis of rickettsiosis for 8/9 patients. For patients 6, 7, and 8, for whom biopsy samples were not available, we confirmed the diagnosis by using swab samples. We also showed that for patient 9, who had a rickettsiosis but no eschar, swabbing of vesicular lesions may be useful for diagnosis, although these lesions were less sensitive than eschars.

Our results indicate that swabs of eschars can be used for molecular detection of rickettsial infections when biopsy samples are not available or biopsies are difficult to perform. We recommend that swabs be used for DNA extraction immediately after sampling or stored at 4°C until needed.

Dr Bechah is a postdoctoral fellow at the Université de la Méditerranée, Marseille, France. Her research interests are epidemic typhus, its relapsing form (Brill-Zinsser disease), and the reservoir of this disease.

We thank L. Espinosa and M. Bedotto for help with statistical analysis and design of primers and probe for R. australis detection.