To the Editor: In 2010, the city of Ngaoundéré in Cameroon experienced its first reported epidemic of meningococcal meningitis. Ngaoundéré, with an estimated population of 180,000, is the main city in the Adamaoua region in northern Cameroon. The 2 northernmost regions of Cameroon, North and Far North, are considered to belong to the African meningitis belt (1) and are periodically affected by meningococcal meningitis outbreaks. However, the Adamaoua region had been spared because of its altitude, latitude, and low population density in comparison with the North and Far North regions. Fewer than 10 sporadic cases have been reported in the Adamaoua region every year.

During February–April 2010, a total of 126 cases of meningitis (70 cases/100,000 inhabitants) were reported in the Adamaoua region. Of the 126 cases, 34 were confirmed by identification of Neisseria meningitidis serogroup A in cerebrospinal fluid (CSF) samples, 46 cases were apparent meningitis in which the patients had turbid CSF, and 46 were clinical cases diagnosed in an epidemic context. The male:female ratio of the patients was 2.7:1. The mean age of patients was 19 years, and median was 17 years.

All 34 specimens were positive for serogroup A by agglutination, rapid test, or both. CSF specimens were cultured on blood agar and chocolate agar supplemented with PolyViteX (bioMérieux, Marcy-l’Etoile, France) and incubated at 37°C in an atmosphere of 5% CO2. Susceptibility to antimicrobial drugs was tested according to the recommendations of the Antibiogram Committee of the French Society for Microbiology (www.sfm.asso.fr). An isolate of N. meningitidis was sent to the World Health Organization Collaborating Centre for Reference and Research on Meningococci in Oslo, Norway, for molecular analyses, as described (www.neisseria.org). The result was that the isolate, a N. meningitidis serogroup A clone of sequence type 7, was susceptible to β-lactams and chloramphenicol but resistant to trimethoprim/sulfamethoxazole. 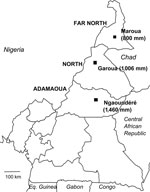 Figure. Northern regions of Cameroon with mean annual rainfall. Maroua is at the 800 mm isohyet line, Garoua at 1,006 mm, and Ngaoundéré at 1,460 mm. Estimate for Maroua is by the...

This epidemic occurred in an area where the mean annual rainfall for the past 30 years was 1,460 mm (Agency for Aerial Navigation Safety in Africa and Madagascar, unpub. data). This value should exclude Ngaoundéré from the African meningitis belt, for which the southern limit of annual rainfall was classically considered to be the 1,100-mm isohyet (Figure).

This epidemic at the border of the African meningitis belt raises the question of the belt limitation and its potential expansion southward. These topics should be addressed through active and standardized surveillance in countries such as Cameroon, which are not entirely included in the belt (2,3).

This meningitis epidemic has 2 other noteworthy characteristics. First, 80 (63%) of 126 suspected cases had a lumbar puncture performed at the Ngaoundéré Regional Hospital or at the Norwegian hospital. With the help of the laboratory, an increasing number of cases of meningitis in Cameroon are confirmed cases (4). Second, the etiologic agent was serogroup A meningococcus, a serogroup that had not been identified in north Cameroon since 2006 (5) but that had been isolated previously (6) and in south Cameroon (7).

We thank the provinces’ authorities and the health districts’ staff for their collaboration and Pascal Boisier for assistance in preparing the manuscript.

This work was supported by the French Ministry of Foreign Affairs.