Head (Pediculus humanus capitis de Geer) and body lice (Pediculus humanus humanus Linnaeus) have been parasites of humans for thousands of years (1). Genetic studies based on mitochondrial DNA (mtDNA) have found 3 phylotypes of P. humanus (2,3). Clade A is the most common genotype with worldwide distribution and is found among both head and body lice. Clade B comprises only head lice and has been found in South America, Europe, and Australia, whereas clade C comprises only head lice from Ethiopia and Nepal (2,4,5). Only body lice have been implicated as vectors of Bartonella quintana, which causes trench fever, bacillary angiomatosis, endocarditis, chronic bacteremia, and chronic lymphadenopathy (6). However, B. quintana has been identified in head lice from homeless children in Nepal (7), in head lice from homeless adults in San Francisco, California, USA (8), and recently in head lice nits from a homeless man in Marseille, France (9). The objective of our study was to use molecular methods to determine the presence of B. quintana infection in head and body lice collected from patients in different locations in Ethiopia, a country where epidemiologic and clinical studies of zoonoses are scarce and a widespread louse infestation exists (6). Moreover, we assessed whether a phylogenetic difference existed between head and body lice collected from the same patient.

After obtaining ethical approval from Jimma University Ethics Review Board, we collected head and body lice from persons at locations at different altitudes in Ethiopia. Lice were transferred to Marseille in sterile tubes at room temperature. Each louse was rinsed twice in sterile water for 15 minutes, and then total genomic DNA was extracted from each louse by using a QIAamp Tissue kit (QIAGEN, Hilden, Germany) as described by the manufacturer. Samples were screened by using a quantitative real-time PCR that targeted a portion of the Bartonella 16S-23S intergenic spacer region (10) and a specific B. quintana gene, fabF3, encoding 3-oxoacyl-(acyl-carrier-protein) (9). Negative controls (DNA from noninfected lice and sterile water) and positive controls (DNA from B. elizabethae) were included in each assay. From 50 randomly selected persons, each of whom had at least 3 body lice and 3 head lice; we selected 1 head louse and 1 body louse from each person for amplification and sequencing of the mitochondrial gene cytochrome b as described (11). For phylogenetic analysis, we used MEGA3.1 software (www.megasoftware.net). For data comparison, we used Epi Info version 6.0 software (Centers for Disease Control and Prevention, Atlanta, GA, USA). A p value <0.05 was considered significant. 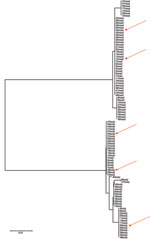 Figure A1. Neighbor-joining tree based on cytochrome b gene sequencing of head and body lice collected from 50 persons, Ethiopia. Arrows indicate lice positive for Bartonella quintana.

Overall, we tested 271 head and 424 body adult lice collected from 134 persons (109 women). Head and body lice co-infection existed on nearly all persons with a range of louse infestation of ≈5 to 20 lice per person. On 1 person, >100 lice were found. All but 2 persons had only black head lice; those 2 persons each had 1 gray louse among their populations of black head lice. All body lice were gray-transparent. All black head lice belonged to genotype C, and all gray lice belonged to genotype A (GenBank accession nos. JF694384–JF694442‏). Head and body lice grouped in 2 different clusters (Figure A1).

All persons with head lice infected with B. quintana were from locations with higher altitudes (>2,121 m), whereas at these altitudes, no body lice were infected with B. quintana. The permanent foci of body lice occur in regions subject to cold weather and in poverty-stricken areas such as Ethiopia. Body lice were found in 39% of Ethiopian migrants, and head lice were found in 65% (13), whereas 67% of schoolchildren from 3 different cities in Ethiopia harbored body lice (14). We do not have current hypotheses to explain the links from B. quintana to head lice at high altitudes or the mutual exclusion of B. quintana in head or body lice in the same person.

In conclusion, we identified B. quintana in genotype C head lice from Ethiopia only at altitudes >2,121 m and only in patients without infected body lice. However, further epidemiologic studies with head lice collected from more patients and from different countries should be performed to determine whether this altitude dependence of B. quintana in head lice exists only in Ethiopia or is a general phenomenon.

Dr Angelakis is a clinician and researcher at the Unité des Rickettsies in Marseille. His research interests are zoonotic pathogens.