To analyze the molecular epidemiology of Mycobacterium tuberculosis strains at a hospital in Buenos Aires, Argentina, and mutations related to multidrug-resistant and extensively drug-resistant tuberculosis, we conducted a prospective case–control study. Our findings reinforce the value of incorporating already standardized molecular methods for rapidly detecting resistance.

During the 1990s, an outbreak of multidrug-resistant (MDR) tuberculosis (TB) in HIV-positive patients occurred at the Muñiz Hospital in Buenos Aires, Argentina (1). Molecular analysis showed that a member of Haarlem2 family of Mycobacterium tuberculosis was responsible (1).

We conducted a prospective case-control study during June 1, 2006–April 30, 2007, at this 300-bed public hospital, which reports ≈40% of new TB cases in the city (2). Our primary aims were to analyze the molecular epidemiology of M. tuberculosis strains circulating at the hospital and the mutations related to MDR TB and extensively drug-resistant TB.

The strains were isolated and tested for antimicrobial drug susceptibility according to the proportion method (3) at the Muñiz Hospital Mycobacteria Laboratory. A proportion were tested for reserve drugs at the Health Protection Agency National Mycobacteria Reference Unit Laboratory, London, UK. DNA was extracted from cultures at this UK laboratory; spoligotyping was performed according to the manufacturer’s instructions (Isogen Life Science, IJsselstein, the Netherlands); and data were analyzed with SPOTCLUST (http://cgi2.cs.rpi.edu/~bennek/SPOTCLUST.html).

In-house macroarrays were performed on MDR TB strains (6) to identify mutations in the katG and the inhA genes. Two regions of the rpoB gene of MDR TB strains were sequenced with the CEQ 8000 Genetic Analysis System. Statistical analyses were conducted by using χ2 and Fisher exact tests.

Figure 1. Multistage cluster sampling method for a study of the molecular epidemiology of Mycobacterium tuberculosis, Buenos Aires, Argentina, June 1, 2006–April 30, 2007. *Complete, having all but one of the following data:...

After we excluded duplicates, treatment follow-ups, and strains with susceptibility patterns other than MDR TB or susceptibility to all drugs tested, 881 strains were susceptible to all drugs tested. Patients with a minimum dataset (name, sex, date of birth or age, TB presentation [i.e., pulmonary or nonpulmonary], and at least 1 sign or symptom describing TB illness and treatment received) were enrolled: 57 of 62 hospitalized patients with MDR TB cultures (Table) and 100 fully susceptible unmatched inpatient controls, for a total of 157 patients. This convenience sample (Figure 1) included only admitted patients because of the difficulty of obtaining clinical information about outpatients. 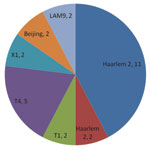 Mutations in the rpoB region were detected by sequencing. The most frequent mutation was the S531L. Mutations at >1 site were rare. In 3 cases, we found 2 point mutations in the same codon. Only 1 MDR TB strain had no mutation in the rpoB segment sequenced; it also had a katG and inhA wild type. Complete susceptibility profile for all 57 MDR TB strains is available in the online Appendix Table (www.cdc.gov/EID/content/17/3/528-appT.htm).

In addition, we detected 5 extensively drug-resistant TB strains. None were clustered by 22-loci VNTR typing.

Spoligotyping identified predominance of the Haarlem family among the MDR TB cases (family responsible for the 1990s [] outbreak) as well as the LAM and T families. A similar strain family distribution was reported for the French Departments of the Americas (7) and Turkey (8). The Beijing family was seldom encountered in these areas, which is in line with recent observations in 7 countries in South America, including Argentina (9).

The MDR TB Haarlem2 strain appears to be more successful than other circulating MDR TB strains and than its susceptible counterpart (of 25 Haarlem2 strains, 20 were MDR TB). This phenomenon could be associated with a bias in the sample resulting from the specialized nature of the hospital or it could be that the MDR TB version has become predominant in the population because of the low fitness cost of its 2 mutations, katG315 and S531L (10,11))). In addition, the presence of clusters suggests that even though new technologies have reduced the time taken to diagnose drug resistance, more rapid initial diagnosis of MDR TB to reduce transmission still is needed (12).

All except 1 of the rpoB mutations in the MDR TB strains were at nt positions 1303–1375. This finding reinforces the value of incorporating already standardized molecular methods for rapidly detecting resistance. Cost is the main reason they are currently not available, but the macroarrays used in this project are inexpensive and have the additional advantage of analyzing katG and inhA mutations independently.

Dr Gonzalo is a clinician and microbiologist working in the private and public health sector in Argentina on HIV, tuberculosis, and clinical microbiology. Her research interests include tuberculosis, mycobacteria, molecular epidemiology, and HIV.

We thank Juan Metrebian and Edward Hogg for their constant support and encouragement and Preya Vekaria for her advice and help.