Since 2001, the New York City (NYC) Bureau of Tuberculosis Control (BTBC), new York, New York, USA, has conducted universal genotyping and used results to detect and investigate clusters of TB with suspected recent transmission (14). One cluster, first identified and characterized in NYC in 2004, was the focus of an extensive epidemiologic investigation. We describe the investigation and discuss novel methods used during the investigation to understand TB transmission.

Cluster membership was defined as patients who had a diagnosis of TB in NYC during 2003–2009 and whose isolates had identical spoligotype and IS6110 RFLP patterns. As the investigation continued, this definition was expanded and included patients whose isolates had identical spoligotype, 12-loci MIRU-VNTR results, and IS6110 RFLP patterns with ± 1 band.

Contact investigations were conducted per BTBC guidelines (20). For contacts of infectious index patients, staff assessed hours of TB exposure during infectious periods of patients, defined as the 12-week period before the patient began appropriate TB treatment (20,21). Infectious periods were extended to date of symptom onset if TB symptoms started >12 weeks before treatment began. Contacts having documented latent TB infection or TB symptoms were referred for medical evaluation and treatment.

Routine demographic and clinical data were obtained from the NYC TB registry and patient interviews. Additional data on homelessness and correctional history were obtained from NYC and New York State databases. Information regarding contacts and places of association (e.g., residences, worksites, and schools) of patients was analyzed to establish links between patients and to derive transmission hypotheses. To substantiate these hypotheses, we reinterviewed patients and their contacts by using a structured questionnaire. The questionnaire was updated with information obtained during patient interviews to ensure that hypotheses were reassessed throughout the investigation.

In October 2007, the NYC Department of Health and Mental Hygiene (DOHMH) Office of General Counsel approved use of names and photographs of patients and their contacts during interviews by BTBC. Cluster investigators administered informed consent forms. Consent forms indicated that names or photographs would be obtained and shown to persons being interviewed as part of the cluster investigation. If the patient denied voluntary permission but had an incarceration history, a public record booking photograph was used. To avoid disclosing confidential medical information, fictitious names and unrelated photographs were included in the compilation of names and photographs. Investigators did not confirm or deny a TB diagnosis of any person or how persons were related. During interviews, investigators asked if patients or contacts recognized any names or photographs. If recognition was indicated, the interviewer probed to understand how persons were linked.

Places of association were geocoded through the NYC Department of City Planning’s Geosupport Desktop Edition Software 9.6.9. Geocoded locations were imported into ArcGIS 9.2 (ESRI, Redlands, CA, USA) and mapped. Locations not geocoded by street address were geocoded by street intersection or other features. The ArcGIS point distance geoprocessing tool was used to calculate Euclidean distances between places of association of patients. Data were obtained as part of an outbreak investigation. Therefore, NYC DOHMH and CDC deemed this activity nonhuman subjects research. 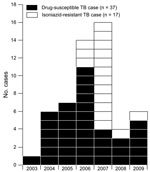 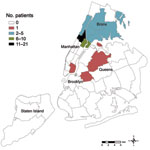 Figure 2. Residences of patients (n = 54) at time of tuberculosis diagnosis, by neighborhood, New York, New York, USA, 2003–2009. Forty-two neighborhoods were designated by the United Hospital Fund. Each neighborhood is...

During 2003–2009, we identified 54 cases of TB as part of this cluster (Figure 1). Patient residence at TB diagnosis by NYC neighborhood is shown in Figure 2. Among 35 (65%) patients who lived in Upper Manhattan at diagnosis, median distance between the residence of any 2 patients was 1.4 km (range 0.01 km–6.6 km). Median distance between any 2 patients residing in the South Bronx (n = 10) at diagnosis was 2.9 km (range 0 km–5.8 km). Initially, the strain was susceptible to first-line anti-TB drugs. However, in 2006, isoniazid resistance emerged in a patient isolate at TB diagnosis. By 2009, 17 (31%) patients had isoniazid-resistant M. tuberculosis at diagnosis. All isoniazid-resistant isolates had the Ser315Thr mutation in the katG gene and no mutations in the inhA gene region sequenced.

Forty-seven (87%) of the 54 patients had isolates with a matching spoligotype, IS6110 RFLP pattern, and 12-loci MIRU-VNTR result (Figure 3). Forty-eight (89%) isolates met the original cluster case definition. Six (11%) were identified as cluster-associated patients on the basis of the expanded cluster case definition. As of December 31, 2008, within the CDC National Tuberculosis Genotyping Service database of 32,581 patient isolates, 6 with this cluster’s spoligotype and 12-loci MIRU-VNTR result were reported outside NYC (New York [n = 3], Delaware [n = 1], Georgia [n = 1], and Pennsylvania [n = 1]) (22). Among the 3 patients who resided in New York State, 1 was diagnosed in NYC and is therefore counted in the cluster (Figure 1); no link to NYC was identified for the other 2 patients.

Patient median age was 41 years (range 10–77 years); 74% were non-Hispanic black and 69% were male (Table). Among 37 patients with drug-susceptible M. tuberculosis, 73% were male and 38% were foreign born. The 17 patients with isoniazid-resistant M. tuberculosis were predominately US born (82%) and had a history of illegal drug use (59%) or incarceration (47%).

Among the 22 persons who disclosed a history of illegal drug use, 19 (86%) indicated noninjection drug use. The mother of a child with isoniazid-resistant M. tuberculosis also reported using illegal drugs. Drugs mentioned by patients connected to illegal drug use included smoking or snorting cocaine (n = 15), smoking marijuana (n = 6), and using heroin (n = 3).

Among 48 patients eligible for contact investigation, 1,226 contacts were identified (median 9, range 0–153 contacts/patient). Twelve investigations of TB exposures in congregate settings were conducted. None of the clustered patients named one another as contacts. Contact investigation identified 1 clinically diagnosed TB case linked to a cluster-associated patient with drug-susceptible M. tuberculosis.

During 2007–2009, patients were asked for permission to use names and photographs. Ten (59%) of the 17 patients with isoniazid-resistant M. tuberculosis, 1 (17%) of 6 patients with drug-susceptible M. tuberculosis, and 7 (64%) of 11 contacts granted permission. Public-record booking photographs were used for 2 patients. Four additional probable epidemiologic links were established through name and photograph use; all were associated with illegal drug use. Patients did not indicate familiarity with fictitious names and unrelated photographs that were presented.

Despite using substantial resources within BTBC and beyond, we did not clearly identify chains of transmission in this outbreak. Only 3 definite epidemiologic links were identified between patients, and only 1 was associated with the rapidly emerging or spreading isoniazid-resistant strain. The strongest link of this cluster is geographic; patients primarily spent time in the same neighborhoods. Although matching genotype does not always signify recent transmission, geospatial concentration and epidemiologic data indicate ongoing and recent transmission of this rare genotype in NYC. Contact investigation results showed evidence of possible transmission. However, no confirmed secondary TB cases were identified among >1,200 identified contacts, further demonstrating limitations of name-based contact investigation.

Emergence of isoniazid resistance in this cluster cannot be clearly explained. None of the patients with drug-susceptible M. tuberculosis showed failure of treatment. Presumably, 1 person, identified by investigators as a shared contact between a patient with drug-susceptible M. tuberculosis and a patient with isoniazid-resistant M. tuberculosis, had a history of taking medications for TB and showed development of isoniazid-resistant M. tuberculosis that had not been reported to BTBC. This person died; therefore, cluster investigators were unable to confirm this hypothesis despite medical record review and pharmacy surveillance.

This investigation was limited by patients’ unwillingness to report their contacts, possibly because of fear of disclosing immigration status (not asked by BTBC staff), illegal drug use, or involvement in other illicit activities. Other possible explanations include forgetting or not knowing their contacts by name (2,23). Certain patients used aliases (not tracked in the NYC TB registry) and claimed to only know their contacts by first names or aliases. Pervasiveness of aliases within patient social networks stymied contact investigation efforts and made establishing epidemiologic links between patients difficult.

High prevalence of illegal drug use within the cluster led investigators to explore how specific drug-use practices contribute to TB transmission. Studies reported that such specific drug-use practices as shotgunning (inhaling smoke from rock cocaine or marijuana and blowing the smoke directly into the mouth of another) and hotboxing (smoking drugs in a small, enclosed space to maximize narcotic effect through first-hand and second-hand smoke) were associated with TB transmission (24,25). Although these practices were not specifically mentioned by patients or their contacts, specific questions were not asked until later in the investigation. After consulting with substance-use experts, BTBC revised their cluster-investigation questionnaire and provided investigators with additional training on patient-interview procedures and drug-use subculture. Understanding drug-use behavior helps TB control personnel elicit sensitive transmission information. BTBC also modified how substance-use information is collected and recorded in the TB registry.

Transmission through casual contact and increased virulence are possible explanations for extensive transmission of this strain and lack of recognition among patients. Although TB transmission from casual contact is considered rare, it has been documented (26–30). If this strain, like other outbreak strains (29), was highly virulent, extensive transmission among patients who did not recognize each other would have been possible. Moreover, geographic proximity of patients to one another might have increased opportunities for TB exposure and supported transmission through casual contact. In addition, positive results for acid-fast bacilli in smears of respiratory specimens among cluster-associated patients were substantial (70% overall, 93% among cocaine users) and considerably greater than recent past NYC TB patients (range 42%–46% during 2003–2008) (NYC DOHMH, unpub. data), thus increasing likelihood of transmission. Investigation findings were consistent with those of a London study that reported that pulmonary TB patients who used cocaine were more likely to be sputum smear positive at diagnosis (31), perhaps related to delays in seeking medical care.

Photograph and name use yielded the strongest epidemiologic links between patients with isoniazid-resistant M. tuberculosis. It was the only method that confirmed patient recognition within the cluster. All epidemiologic links established through photograph recognition were related to illegal drug activity. Other outbreak investigations have highlighted unwillingness of patients to share social contacts when these contacts are connected to illegal activities (4,5,13).

Insights gained from using name and photograph data in an ongoing investigation will benefit TB control programs. This method would have been more successful if used earlier in the investigation. TB control personnel contemplating adopting this strategy should obtain legal guidance before an outbreak occurs because privacy laws vary from one locality to another.

Ms Perri is the genotyping coordinator at the Bureau of Tuberculosis Control at the New York City Department of Health and Mental Hygiene. Her research interests include the molecular epidemiology of tuberculosis and infectious disease control in resource-limited settings.

This outbreak investigation reflects the efforts of many dedicated New York City Department of Health and Mental Hygiene staff (including those in Bureau of Tuberculosis Control, Division of Epidemiology Geographic Information Systems Center, Bureau of Alcohol and Drug Use Prevention, Care and Treatment, and Public Health Laboratory); a technical assistance team from the Division of Tuberculosis Elimination, CDC; and laboratory staff at the Public Health Research Institute Tuberculosis Center, New York State Department of Health Wadsworth Center, and Michigan Department of Community Health, Bureau of Laboratories.