Imported Measles and Implications for Its Elimination in Taiwan

During November 2008–May 2009, an outbreak of 53 measles cases occurred in Taiwan. Of these, 3 cases were sporadic, and the other 50 cases could be grouped into 8 clusters by genetic analysis. We determined 7 H1 genotypes linked to importation and 1 G3 genotype linked to an untraceable source.

The availability of a measles vaccine in the 1960s led to substantial reductions in the incidence of measles globally. Along with improvements in living conditions, nutrition, and the availability of antimicrobial drugs for secondary bacterial infections, the mortality rate was greatly reduced (1). A live-attenuated measles vaccine was introduced to Taiwan in 1968, and a routine vaccination policy was established in 1978 to provide measles vaccine to infants at 9 and 15 months of age. During 1992–1994 and 2001–2004, two catch-up campaigns were implemented, targeting birth cohorts September 1976 to September 1990 and September 1990 to September 1994, respectively. Starting in 2006, the measles, mumps, and rubella (MMR) vaccine targeted infants 12–15 months old and 6-year-old children. The coverage rates for the first dose of measles vaccine and the second dose of MMR were 91% and 95%, respectively, since 1996. In recent decades in Taiwan, 4 major measles outbreaks have occurred, with 2,219 (in 1985), 1,386 (1988), 1,060 (1989), and 303 (1992) reported cases. Beginning in 1993, the annual number of reported measles cases was <100; by the end of 2007, the annual number of confirmed measles cases was <10 (2). The ability to actively control measles has increased in Taiwan since 1991 because of a combined plan to eliminate polio, measles, congenital rubella syndrome and neonatal tetanus.

The key to controlling measles is achieving and sustaining high levels of vaccination coverage. Finding a way to prevent the transmission of measles is an important topic for any country in the elimination phase. Here, we report several measles outbreaks that occurred in Taiwan during 2008 and 2009.

In total, 140 suspected measles cases were reported to the Taiwan Centers for Disease Control from November 2008 to May 2009, and 53 were confirmed (Table A1). The criteria for confirming cases included laboratory diagnosis and establishing an epidemiologic link to the laboratory-diagnosed case. The criteria for the laboratory diagnosis included the presence of measles immunoglobulin (Ig) M, isolation of measles virus, or identification of measles virus by reverse transcription PCR (2,3).

A timetable for occurrence of the 53 measles cases was constructed (Figure 1, panel A) on the basis of the week of onset of rash for each patient. The locations of the hospitals that reported these cases are shown in Figure 1, panel B. 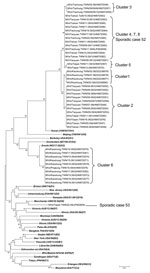 Figure 2. Phylogenetic analyses of the 456 carboxyl-terminal nucleotides of the N gene sequences of isolates obtained from 45 measles case-patients from November 2008 through May 2009, Taiwan. The respective accession number for...

Of these 53 patients with confirmed measles, 36 (67.9%) were male. There were 15 children (28.3%) <12 months of age and 19 children (35.8%) from 12 months to 6 years of age. Adults accounted for 19 cases (35.8%). Only 1 patient (1.88%) had received 2 doses of a measles-containing vaccine; 4 patients (7.5%) had received 1 dose; 7 patients (13.2%) recalled having received vaccines; 9 adults (17.0%) did not know their vaccination status; and the remaining 31 patients (58.4%) had not received any vaccines. Among the 6 nosocomial measles outbreaks, 2 infection sources (clusters 2 and 5) were children <12 months old and therefore not eligible for the first dose of the MMR vaccine, 4 clusters (clusters 1, 3, 4, and 7) were caused by children between 13–17 months old who were not vaccinated, and 1 cluster (cluster 8) was caused by an adult from Vietnam with an uncertain vaccination history. The outbreak on the military base was caused by an adult who was assumed to have been vaccinated.

Phylogenic analysis determined that the measles virus genotypes from these 8 outbreaks fell into 6 clades (Figure 2). Although the source was untraceable, the measles virus sequences from cluster 6 belonged to genotype G3; the sequence was 100% identical to a G3 strain (MVi/H Kajang.MYS/11.09) isolated from Malaysia (T. Tran, pers. comm.). The other sequences all belonged to genotype H1 and were grouped into 5 lineages. Clusters 1, 2, and 3 were linked to importation from the People’s Republic of China and were grouped into different lineages. Clusters 4, 5, 7, and 8, which originated in Vietnam, were divided into 2 lineages, with clusters 4, 7, and 8 in the same lineage and cluster 5 in another lineage.

Among these 53 confirmed cases, 26 (49%) patients contracted measles from hospital exposure, and 3 patients (5.7%) were hospital staff. Vaccination policies for workers in health care institutes should be strengthened because these workers have the highest potential risk of contracting the disease (4,5). Many other febrile exanthematic diseases caused by pathogens other than measles virus, such as enterovirus, rubella virus, parvovirus B19, human herpesvirus-6, or Kawasaki syndrome, could have symptoms similar to measles and be misdiagnosed (6–8). It is therefore vital to ensure that clinicians are fully aware of the disease and can recognize it in a timely manner.

After import-associated measles outbreaks were recognized, the MMR vaccination was recommended for persons planning to travel to measles-endemic countries. Successful immunization policies that include routinely vaccinating children with 2 doses of a measles-containing vaccine greatly reduce disease contraction among preschool and primary school children (9–11). Because measles outbreaks may occur in areas with high vaccine coverage (12–14), the higher proportion of measles cases in adults, especially in young adults, should be addressed further and evaluated with regard to the possible need for additional immunizations.

The major threats to measles control in Taiwan are similar to those faced by other countries in the elimination phase; the key questions are 1) how to detect the index case in real time, and 2) how to prevent import-associated transmission. Among these continuous outbreaks, 6 chains originated from children <18 months of age without adequate immunization who had recently traveled to measles-endemic countries. Clinicians being alert for patients being brought for treatment with a fever and rash at pediatric clinics will greatly improve the sensitivity of measles surveillance systems and prevent further nosocomial transmission. Special emphasis should be paid to pediatric patients without vaccination records and with a history of travel abroad. Of course, the ultimate goal of eliminating measles requires an agreement from all countries to contain the disease in their own territories.

Ms Cheng is an associate researcher at Centers for Disease Control Taiwan. She is in charge of laboratory diagnosis of measles, rubella, mumps, and varicella-zoster virus infection. Her research interests involve the changing epidemiology of vaccine-preventable diseases.

This work was supported by the Centers for Disease Control, Taiwan.

Imported Measles and Implications for Its Elimination in Taiwan