During a scrub typhus outbreak investigation in Thailand, 4 isolates of O. tsutsugamushi were obtained and established in culture. Phylogenetic analysis based on the 56-kDa type-specific antigen gene demonstrated that the isolates fell into 4 genetic clusters, 3 of which had been previously reported and 1 that represents a new genotype.

Scrub typhus is a febrile disease endemic to the Asia–Australia–Pacific region, where ≈1 million cases occur annually (1). The causative agent of scrub typhus in this region is the gram-negative obligate intracellular bacterium Orientia tsutsugamushi (2). The bacterium maintains itself in trombiculid mites, and small mammals serve as reservoir hosts in the natural life cycle of the mites. Chiggers, the larval stage of mites, act as the transmission vector for O. tsutsugamushi (1). Humans and small animals become infected following the bite of chiggers harboring O. tsutsugamushi. After an incubation period of 7–14 days, high fever, chills, headache, rash, and an eschar usually develop in infected persons (3).

Scrub typhus is endemic to northern Thailand, especially Chiang Mai Province, where >200 cases are reported each year (4). During June 2006–May 2007, a total of 142 febrile children with clinically suspected scrub typhus were admitted to Nakornping Hospital in the city of Chiang Mai. Serologic and molecular laboratory test results showed that 65 of the children were positive for O. tsutsugamushi. Among the 142 hospitalized children, 30 were Hmong hill tribe people living in Ban Pongyeang, a village in the mountain area located north of the Chiang Mai. Laboratory testing also confirmed that 26 of the 30 Hmong children had scrub typhus.

To better characterize the specific strain(s) of O. tsutsugamushi present in the area and to determine how the agent(s) is transmitted to humans, we genetically typed O. tsutsugamushi obtained from these 26 children and small mammals. The Royal Thai Army Medical Department Ethical Committee approved all procedures (protocol S014q/45). Small mammals were handled according to guidelines in the Guide for the Care and Use of Laboratory Animals (National Institutes of Health publication no. 85–23, revised 1985).

We obtained clinical information and blood samples from 26 scrub typhus–infected children from Ban Pongyeang after their parents gave informed consent. Blood specimens were stored in liquid nitrogen and shipped on dry ice to the Armed Forces Research Institute of Medical Sciences in Bangkok, Thailand, for serologic testing, genetic characterization, and isolation of O. tsutsugamushi.

We assessed serum samples for the presence of antibodies against O. tsutsugamushi by using an indirect fluorescence antibody assay (5) with an in-house antigen preparation from propagated O. tsutsugamushi Karp, Kato, and Gilliam strains. Single specimens with an IgM or IgG titer >400 were considered positive; paired specimens were considered positive if they showed seroconversion or a >4-fold rise in titer (6). To genetically characterize O. tsutsugamushi, we amplified a fragment of the 56-kDa type-specific antigen gene from patients’ blood genomic DNA by using a modified nested PCR procedure as described (7). A newly designed forward primer (F584, 5′-CAA TGT CTG CGT TGT CGT TGC-3′) was used with the previously reported reverse primers RTS9 and RTS8 (7). The expected 693-bp products were purified, directly sequenced, and aligned according to ClustalW algorithm (www.clustal.org/). Using PAUP 4.0b10 software and maximum parsimony methods, we generated phylogenetic relationships (8). O. tsutsugamushi was isolated by using animal inoculation and L-929 mouse fibroblast cell culture techniques as described (9).

Figure 1. . . Eschars in different body areas of children with scrub typhus (A–D) and a child carried on his mother’s back during work (E), Ban Pongyeang, Thailand.

Patient clinical information and laboratory test results are shown in the Technical Appendix. The patients’ ages ranged from 11 months to 13 years. Common signs and symptoms of illness were fever (100.0%), chills (73.1%), eschar (73.1%), headache (57.7%), and rash (23.1%) (Technical Appendix; Figure 1). Of the 26 patients, 23 showed seroreactivity to O. tsutsugamushi antigens; PCR confirmed the presence of O. tsutsugamushi DNA in 24/26 patients (Technical Appendix). Two O. tsutsugamushi isolates (PYH1 and PYH4) were successfully established from EDTA whole blood samples of 7 patients (Technical Appendix). Patient histories revealed that the infected children commonly played in grassland, woods, and rice fields. Cases also occurred in infants who were carried on their mother’s back during work in those areas (Figure 1E). In addition, the opportunity to become infected was increased by frequent exposure to vector mites living in vegetation-rich areas.

To investigate O. tsutsugamushi transmission, we trapped small mammals from different terrains in Ban Pongyeang, identified them to species level, and collected tissue specimens (whole blood, liver, and spleen). The specimens were kept in liquid nitrogen and delivered to the Armed Forces Research Institute of Medical Sciences for laboratory testing. Chiggers were removed from captured mammals and stored in 70% ethanol. The chiggers were slide-mounted and identified to species by using a microscope.

Thirty-six (65.5%) of 51 animals tested were seroreactive to O. tsutsugamushi (Table 1). Compared with the other animals, a higher percentage (100%) of B. indica rats had O. tsutsugamushi infections, indicating that this species might serve as a reservoir host for the bacterium (Table 1). Because of limitations of commercial secondary antibodies, we could not perform indirect fluorescence antibody assays for the captured T. glis shrew (1), M. berdmorei ground squirrels (2), and H. javanicus mongoose (1). Two O. tsutsugamushi isolates (PYA5 and PYA6) were established from livers and spleens of 2 B. indica rats (Table 1). Together, the high prevalence of O. tsutsugamushi–seroreactive small mammals and the presence of infested scrub typhus–specific arthropod vectors indicate that scrub typhus is endemic to the Ban Pongyeang area. 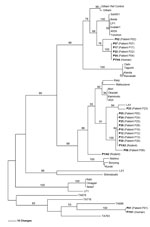 O. tsutsugamushi obtained from the infected children and small mammals was characterized on the basis of Orientia spp.–specific 56-kDa gene fragments. Multiple alignment and phylogenetic analysis demonstrated that the 4 O. tsutsugamushi isolates from Ban Pongyeang fell into 4 clusters. Sequences for 3 of the isolates clustered with Gilliam, LA, and TA, 3 genotypes that are commonly found in Southeast Asia (10,11); the sequence of the fourth isolate presented as a divergent distinct genotype (Figure 2). Most of the children were infected with a strain genetically similar to the LA cluster (Figure 2). Moreover, this major pathogenic strain was recovered from B. indica bandicoot rats (isolate PYA5), the most commonly found rats in the village and the small mammals with the highest densities of L. deliense chiggers. These findings indicate possible transmission between animals and humans. Many studies have demonstrated that chiggers can acquire O. tsutsugamushi during the feeding process (12–15). Therefore, rodents could play a critical role as reservoir hosts for O. tsutsugamushi and for feeding vector mites, causing widespread distribution of O. tsutsugamushi in Ban Pongyeang.

We thank the pediatric ward nurses and central laboratory staff at Nakhornping Hospital for their assistance.

Support for this study was provided by the Royal Thai Army (to W.R.); the Thailand Tropical Diseases Research Funding Program (T-2; to J.G.); the Thanphuying Viraya Chavakul Foundation for Medical Armed Forces Research Grant (to T.R.); and the Global Emerging Infections Surveillance and Response System, a Division of the Armed Forces Health Surveillance Center (work unit no. 0000188M.0931.001.A0074) (to A.L.R.).

Page created: April 16, 2013
Page updated: April 16, 2013
Page reviewed: April 16, 2013
The conclusions, findings, and opinions expressed by authors contributing to this journal do not necessarily reflect the official position of the U.S. Department of Health and Human Services, the Public Health Service, the Centers for Disease Control and Prevention, or the authors' affiliated institutions. Use of trade names is for identification only and does not imply endorsement by any of the groups named above.