To the Editor: Group A rotaviruses are the most common viral cause of acute gastroenteritis in young children. The most frequently detected group A rotavirus genotype combinations include G1P[8], G2P[4], G3P[8], G4P[8], and G9P[8]. The G9 genotype has been associated with multiple P types, including P[8], P[6], and P[4], although genotype G9P[8] is predominant (1).

In Latin America, a large number of unusual G-P combinations have been reported, and among these is the rare G9P[4] genotype, which was identified in Brazil in the 1990s (2), and later reported infrequently elsewhere in Latin America (3). In 2010, cases of group A rotavirus gastroenteritis associated with genotype G9P[4] were reported in Mexico (4). Increases in the incidence of group A rotavirus gastroenteritis were reported in 2010 in Mexico and Guatemala and in 2009 in Honduras (http://new.paho.org/hq/dmdocuments/2010/Epi_Alerts_2010_mar_5_rotavirus.pdf).

In response to these reports of increased group A rotavirus disease, fecal samples collected in Chiapas State, Mexico (in 2010, 30% of the cases in Mexico were from Chiapas), Guatemala, and Honduras in 2009–2010 that were positive by enzyme immunoassay were sent to the US Centers for Disease Control and Prevention (Atlanta, GA, USA) for characterization. Viral protein 4 (VP4) (P) and VP7 (G) genotyping, nucleotide sequencing, and genotype identification were performed by using consensus and genotype-specific oligonucleotide primers (5), and sequences were subjected to phylogenetic analyses. VP6 and nonstructural protein 4 (NSP4) genes of selected samples were also sequenced.

Results showed an increase in prevalence of the rare G9P[4] strain, which was the predominant strain in Guatemala and Mexico, and the second most predominant strain in Honduras, after G1P[8]. Group A rotavirus genotypes G1P[8] and G3P[8] have been reported to be predominant in Mexico (4). G1P[8] and G2P[4] were associated with most group A rotavirus infections in Guatemala (6,7) and G2P[4] predominated in Honduras (7). G9P[4] has not been reported in Guatemala or Honduras. In Mexico, the outbreak might have originated from a common source, such as untreated drinking water (http://new.paho.org/hq/dmdocuments/2010/Epi_Alerts_2010_mar_5_rotavirus.pdf). 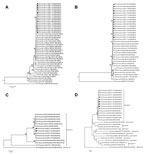 Rahman et al. have hypothesized that the G9P[4] genotype combination was formed by reassortment between more frequently occurring strains (e.g., G2P[4] and G9P[6] strains) (8). Potential parental strains have been circulating at high levels in Latin America for ≈30 years. During this period, G9 and P[4] accounted for 15% and 22% of all G and P types, respectively, in Latin America and the Caribbean (3). Only 0.4% of strains were G9P[4] during this period, which suggests that the markedly increased prevalence of this genotype in 2009–2010 was the result of a dramatic event, such as genetic reassortment.

Previous studies of G9P[4] strains examined only VP4 and VP7 genes and had not characterized VP6 and NSP4 genes of these strains. The presence of an NSP4 genotype E6 gene within these viruses was surprising. The NSP4 E6 genotype has been described in only 5 strains, all of which were from human cases of infection in Bangladesh or India (9,10) and were associated with VP4 genotype P[6] and VP7 genotypes G8 or G12. The complete global distribution of this NSP4 genotype remains to be determined.

Although many factors account for increased reports of group A rotavirus gastroenteritis observed in Mexico, Guatemala, and Honduras in 2009–2010, our data suggest emergence of the previously rare G9P[4] group A rotavirus genotype in these countries. Whether the G9P[4] genotype becomes the common strain in Latin America or elsewhere remains to be determined.