To the Editor: Rabies is caused by 12 recognized virus species within the Lyssavirus genus (family Rhabdoviridae) (1) and each year causes 55,000 deaths worldwide among humans. In Europe, the main reservoir and vector of rabies is the red fox (Vulpes vulpes), followed by the raccoon dog (Nyctereutes procyonoides) in central and Baltic Europe (2). Among these virus species, the rabies virus (former genotype 1, classical rabies virus) is maintained in reservoir mammals, mainly carnivores. Despite the successful oral vaccination campaigns of wildlife that eliminated rabies in large parts of Europe (2), the disease still occurs in Europe; 4,884 cases in animals were recorded in 2012.

Until 2012, Greece had been free of rabies since 1987; the last case occurred in a dog. During 1971–1987, a total of 248 cases were recorded in domestic animals, of which only 6 occurred during 1981–1987 (3). The wide compulsory vaccination of dogs, along with control of stray dogs, were the main measures leading to the elimination of rabies in Greece.

Greece shares land borders with Turkey, Former Yugoslav Republic of Macedonia (FYROM), and Bulgaria, where rabies is reported in wild and domestic animals (4; www.who-rabies-bulletin.org/). After the fox rabies case reported in FYROM in 2011, ≈0.3 km from Greece (4), rabies surveillance was improved along the northern and eastern land borders of Greece, and wild and domestic animals found dead or suspected of having rabies were collected. This program was approved by the European Commission. The first rabies case was diagnosed on October 19, 2012, in a red fox in Palaiokastro, 60 km from the Albanian border. The animal was wandering in the village during daytime and attacked a dog before being killed by local hunters and sent to the National Reference Laboratory for Animal Rabies (Athens, Greece) for rabies testing. The second case, isolated in Ieropigi, 4 km from the Albanian border, was a shepherd dog demonstrating aggressive behavior against dogs and sheep of the flock. Seven additional cases (6 foxes, 1 dog) were reported in December 2012 in 2 prefectures of northern Greece that share borders with FYROM (5). 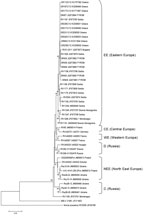 Phylogenetic analysis of the partial sequences of the N gene of isolates from Greece compared with representative sequences from the Balkans (Figure) showed that isolates from Greece resolved within the East Europe (EE) group of the cosmopolitan lineage. The EE group encompasses the 9 Greek isolates with referenced viral sequences from FYROM, Bulgaria, Serbia, Bosnia Herzegovina, and Montenegro. Within the EE group, <1.5%-nt divergence exists between all analyzed N gene sequences (567 nt).

The perfect nucleotide identity shown between the 6 isolates from Greece and 2 strains from Serbia and FYROM demonstrates a close genetic relationship between them. This finding supports the hypothesis of movement of rabies-infected hosts in the western Balkan countries.

Greece was rabies free for 25 years. In the 2012 outbreak, the rabies cycle appears to be sylvatic, whereas until 1987, dogs were the main reservoir of rabies. Measures including public awareness campaigns and intensified vaccination of stray animals and shepherd dogs, combined with control of stray dogs and cats, already have been implemented. In accordance with the current European Commission recommendations, Greece continued rabies surveillance and eradication program throughout the country in 2013, including the implementation of an oral rabies vaccination program for foxes in autumn 2013 (10).

The surveillance program and part of the laboratory work were financed in part by the European Commission.