During follow-up of a 2012 US outbreak of lymphocytic choriomeningitis virus (LCMV), we conducted a trace-forward investigation. LCMV-infected feeder mice originating from a US rodent breeding facility had been distributed to >500 locations in 21 states. All mice from the facility were euthanized, and no additional persons tested positive for LCMV infection.

Lymphocytic choriomeningitis virus (LCMV), a rodent-borne arenavirus, causes inapparent infection in mice but can cause febrile illness, aseptic meningitis, encephalitis, and severe birth defects in humans (www.cdc.gov/ncidod/dvrd/spb/mnpages/dispages/lcmv.htm) (1). LCMV also can cause disseminated disease with substantial mortality among infected organ transplant recipients (2). The reservoir is the common house mouse, Mus musculus, but other rodents can become infected and transmit infection to humans. LCMV is endemic among house mice throughout the world, with antibody seroprevalence of 5%–13% in the United States (3). LCMV is easily maintained after being introduced into a captive mouse population because mice can persistently shed the virus. LCMV can be transmitted to humans through direct or aerosol contact with urine, feces, or saliva of infected rodents; through transplantation of infected organs; and from mother to fetus (1). Sporadic cases occur from exposure to peridomestic house mice, and outbreaks from exposure to infected rodents, particularly hamsters, kept as pets or used for laboratory experimentation have been reported (2,4–7). No outbreaks have been linked to contact with frozen mice.

During summer 2012, state and local agencies and the Centers for Disease Control and Prevention (CDC; Atlanta, GA, USA) investigated an outbreak of LCMV in the United States. A total of 31 (32%) of 97 tested employees of 3 rodent breeding facilities were infected because of the likely introduction of LCMV into the captive breeding population by wild mice. LCMV aseptic meningitis was diagnosed in 4 employees, and diagnostic testing of the breeding population identified LCMV infection among mice but not rats; no hamsters were bred at the facility (facility A in [8,9]). All mice originating from this captive breeding population were considered potentially infected and had been distributed to rodent purchasing facilities in multiple states by an Indiana rodent distributor, facility B. We describe the trace-forward investigation of live mice distributed by facility B and the public health measures taken to prevent additional human LCMV infections. 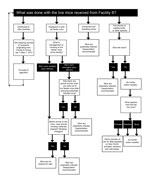 During July and August 2012, investigators from CDC’s Viral Special Pathogens Branch reviewed shipping records from facility B and subsequent distributors and notified health departments in states that had received potentially infected mice during January 1–May 7, 2012; frozen mice were considered a low public health risk and were not traced. Health departments were provided with a list of facilities that had purchased these mice, educational resources about LCMV, and an algorithm to determine whether potentially infected mice remained at these purchasing facilities resulting from the presence, comingling, or breeding of these mice, which would maintain LCMV among the mouse population (Figure 1). As a result of varying state statutes concerning regulation and licensing of pet stores and animal breeders or distributors, the government agencies that had jurisdiction to perform these investigations included local and state departments of public health, environmental health, food safety, and agriculture.

State investigators interviewed purchasing facility managers by telephone, mail, email, or in person to determine whether potentially infected mice remained on the premises and to encourage euthanization of these mice. Interviews also assessed whether pregnant, ill, or immunocompromised employees might have been exposed to LCMV by directly handling potentially infected mice or bedding or equipment used for the mice. Because of risk for severe disease, facility managers were asked to offer serologic testing to these employees for LCMV IgM and IgG, which was performed by CDC by using ELISA as described (10). No additional case-finding activities were conducted. Because of resource limitations, diagnostic testing of live mice at purchasing facilities was not conducted.

Figure 2. . The distribution of mice potentially infected with lymphocytic choriomeningitis virus originating from facility A to ≈500 pet stores and other animal facilities in 21 states, United States, 2012.

Reviews of shipping records indicated that ≈304,000 live mice distributed by facility B were shipped to 561 purchasing facilities: 543 pet stores, 11 breeders or distributors, and 7 zoos or aquariums in 21 states, potentially exposing thousands of employees and pet store mouse purchasers to LCMV. Facility B had shipped mice to 4 subsequent distributors; the largest was located in Georgia, and it had shipped >183,000 mice to 420 purchasing facilities in 16 states (Figure 2). Interviews of facility managers at purchasing facilities revealed that 48% still had potentially infected mice; >10,000 mice were subsequently euthanized. The most common reason for still having potentially infected mice was comingling of rodent shipments, followed by breeding or still having mice from the original shipments.

Serologic testing was performed on blood samples from 34 pet store or zoo employees from 6 states who self-identified as pregnant or ill, were potentially exposed to LCMV, and agreed to serologic testing. Fourteen were pregnant; 1 had aseptic meningitis; and 23 reported nonspecific symptoms including fever, headache, body aches, cough, and vomiting. All persons tested were negative for antibodies against LCMV.

These captive feeder mice had a wide and complex distribution chain, potentially exposing thousands of persons to LCMV. No additional human cases were identified after distribution of these mice; none of the pet store or zoo employees tested had serologic evidence of infection. Although no additional human cases were identified, euthanasia of all potentially infected rodents was recommended to mitigate potential risk.

Wild mice that access captive breeding populations are often the source of infection of captive rodent populations (8,11). After being introduced, LCMV transmission is easily maintained among mouse colonies and is difficult to recognize because mice do not appear ill. Because persistently infected mice pass infection to their offspring, the number of infected mice in a breeding colony can quickly multiply. Mice can be persistently infected without having serologic evidence of infection (12); thus, LCMV can be missed by serologic screening alone. Therefore, preventing introduction of the virus into breeding colonies, depopulation of infected rodents, and correct use of personal protective equipment are the most efficient ways to mitigate human exposure. We recommend preventive measures at each point in the distribution process, both domestically and abroad (Table) (13–15). More research is needed to develop methods for detecting LCMV in rodents at distributors and pet stores.

Our investigation had several limitations. Employees tested were a fraction of those who had had contact with potentially infected mice. Also, pet store mouse purchasers and purchasing facility employees were difficult to contact, and no pet store customers were tested. Thus, the true number of infected persons is unknown.

Rodent breeders and distributors can fall through a regulatory gap in the United States. Frozen feeder mice are considered pet food and can be regulated by the Food and Drug Administration (FDA), but neither FDA nor the US Department of Agriculture has the authority to regulate live mice and rats because they are not regulated under the Animal Welfare Act (7 CFR 2132, May 13, 2002, www.aphis.usda.gov/animal_welfare/downloads/awa/awa.pdf) and the Food, Drug and Cosmetics Act (21 CFR 500, April 1, 2012, www.accessdata.fda.gov/scripts/cdrh/cfdocs/cfcfr/CFRSearch.cfm?CFRPart=500&showFR=1). Therefore, regulatory authority falls to the states, which have an array of regulations governing the handling, breeding, and distribution of rodents, including the licensing of pet breeders and distributors (15; Thomas Edling, pers. comm.), as was evident in this trace-forward investigation. Because of the lack of consistent regulation, we recommend that state and federal partners and rodent industry advisory groups work with breeders, distributors, and pet stores to increase awareness of LCMV infection and implement recommended best practices (Table) to prevent introduction of LCMV into captive rodent populations, prevent subsequent dissemination of potentially infected rodents, and reduce the potential for human exposure and disease among employees and consumers of pet stores and rodent breeding facilities.

This investigation was a collaborative effort, and we acknowledge Thomas Edling and Edward Weiss for their contributions.

1Additional members of the Multistate LCMV Outbreak Working Group who contributed data are listed at the end of this article.