Each year, the estimated 820,000 incident cases of gonorrhea in the United States result in lifetime direct medical costs of $162 million (1,2). Although substantial, the incidence of gonorrhea in the United States has decreased since the 1970s in part because of sexually transmitted disease (STD) prevention programs (3–5). However, treatment and control efforts can be hindered by antimicrobial drug resistance (6–8).

Neisseria gonorrhoeae has been remarkably adept at acquiring and maintaining resistance to antimicrobial drugs used for treatment, such as penicillin, tetracyclines, and fluoroquinolones (e.g., ciprofloxacin). After first spreading in Hawaii and California during the late 1990s and early 2000s, ciprofloxacin-resistant gonococcal strains became increasingly prevalent in the United States during the 2000s. By 2007, the Centers for Disease Control and Prevention (CDC) no longer recommended ciprofloxacin or other fluoroquinolones for treatment of gonorrhea, which make the cephalosporins cefixime or ceftriaxone the only remaining recommended treatment option (9).

During the past several years, gonococcal susceptibility to the cephalosporins has been decreasing (6–8). In response to increasing cefixime MICs in the United States, CDC recently updated its treatment recommendations for gonococcal infections (10). CDC now recommends dual therapy with ceftriaxone (an injectable cephalosporin) and a second antimicrobial drug as the only remaining recommended first-line treatment option for gonorrhea (10). However, the possible emergence and spread of cephalosporin resistance could eventually threaten the effectiveness of this regimen and pose a major public health challenge (6–8).

We first focused on simple comparisons of trends in gonorrhea incidence rates in 2 groups of cities in the United States: those with relatively high prevalence and those with relatively low prevalence of ciprofloxacin resistance. After performing these illustrative comparisons, we used regression analyses to examine the association between ciprofloxacin resistance and gonorrhea incidence in a more robust manner. For simplicity, we describe our study as a city-level analysis, although as described in more detail below, the data we analyzed comprised a mixture of sources at the city, county, and metropolitan statistical area levels.

We used antimicrobial drug susceptibility data from the Gonococcal Isolate Surveillance Project (GISP) to analyze the association between ciprofloxacin resistance and gonorrhea incidence over time at the city level. GISP has been described in detail by Schwarcz et al. (11) and Kirkcaldy et al. (12). In brief, GISP is a sentinel surveillance system established in 1986 to monitor antimicrobial drug susceptibility among N. gonorrhoeae isolates. Each month, urethral gonococcal isolates and clinical data are systematically collected consecutively from up to the first 25 men at participating STD clinics in each city in whom urethral gonorrhea was diagnosed (11,12). Cities may have a single participating clinic or multiple clinics. The gonococcal isolates are tested for antimicrobial drug susceptibility by using agar dilution method. Ciprofloxacin susceptibility has been monitored in GISP since 1990 (9). The prevalence of ciprofloxacin resistance increased during the late 1990s and 2000s (9). By 2007, ciprofloxacin resistance was prevalent in all regions of the United States, prompting CDC to no longer recommend fluoroquinolones for treatment of gonorrhea (9). Given this time line and availability of data for additional variables described later, we included the years 1991–2006 in our analysis.

We performed regression analyses in which the dependent variable was the city gonorrhea incidence rate (log) and the independent variable of interest was the percentage of GISP isolates resistant to ciprofloxacin in GISP clinic(s) located in the given city. The regression also included sociodemographic variables (percentage of persons who were black, percentage of persons 15–29 years of age, unemployment rate, per capita income, robbery rate) and binary (dummy) variables for each city and year to control for city-specific factors and national trends in factors that influence city-level gonorrhea incidence rates (Table 1).

We included percentage of persons who were black and percentage of persons 15–29 years of age as explanatory variables because reported STD rates are often disproportionately high among black persons and youth (13). We included unemployment, income, and robbery rates as explanatory variables because STD rates also have been linked to social determinants of health (14,15). Sociodemographic variables, such as these, have been shown to correlate with STD rates at the population level over time (16,17).

Gonorrhea and syphilis incidence rates, percentage of persons who were black, and percentage of persons 15–29 years of age were obtained from surveillance records and US Census Bureau data maintained by CDC (13). Robbery rates, unemployment rates, and per capita income data were obtained online from various federal agencies (Table 1). Of our 272 observations, 11 had missing values for ≥1 variable. Missing values for the variables were replaced with estimated values, and we assumed a linear trend from one year to the next. For example, if the unemployment rate for a given city in 2004 was missing, the average of the unemployment rate for the given city in 2003 and 2005 was assigned for 2004.

A common problem with regression analysis of data consisting of multiple observations over time is serial correlation, in which the error term in a given year correlates with the error term in the previous year. We used 2 approaches to address the issue of serial correlation. First, we calculated SEs that are robust to the serial correlation. Second, we corrected for the autocorrelated error terms when computing the regression (18). Specifically, we used ordinary least squares (OLS), included the lagged dependent variable as an exploratory variable, and used the Newey-West procedure to calculate heteroskedasticity- and autocorrelation-consistent SEs for the regression coefficients. We also estimated a linear regression with correction for first-order autocorrelated errors (AR1) by using the AR1 procedure.

The specific equation we estimated with OLS was Gi,t = α + β1Gi,t-1 + β2Ri,t + γXi,t + Ci + Yt + εi,t, in which Gi,t is the log of the gonorrhea incidence rate in city i in year t, α is a constant, Ri,t is the percentage of isolates resistant to ciprofloxacin in GISP clinic(s) of city i in year t, Xi,t is a vector of sociodemographic variables listed earlier, C denotes city dummy variables, Y denotes year dummy variables, and ε is the error term. The equation we estimated with AR1 was the same as the previous equation except that the lagged value of the dependent variable (Gi,t – 1) was not included in the model. Thus, the differences between the 2 approaches we used to address serial correlation can be summarized as follows. The OLS regression includes the lagged value of gonorrhea incidence rates as an independent variable and calculates SEs that are robust to autocorrelation in the error terms. The AR1 regression is corrected for first-order correlation in the error terms and does not include the lagged value of the gonorrhea incidence rate. Analyses were conducted by using WinRATS version 8.01 (Estima, Evanston, IL, USA). 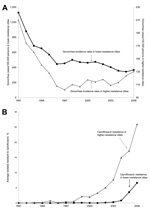 The coefficient of the ciprofloxacin resistance variable was positive and significant across all 4 models we estimated (p<0.01) (Table 2). Ciprofloxacin resistance in a given city in a given year was associated with higher gonorrhea incidence rates in that city in the given year. This finding was consistent regardless of estimation procedure (OLS in models 1 and 2 and AR1 in models 3 and 4) and regardless of the exclusion (models 1 and 3) or inclusion (models 2 and 4) of the additional sociodemographic variables.

Our results can help to quantify the possible effect of antimicrobial drug resistance on the incidence of gonorrhea at the population level. In model 2, the resistance coefficient was 0.710, which suggested that a change of 0.1 in the resistance variable would be associated with an increase in gonorrhea of ≈7%. Thus, our findings suggest that gonorrhea incidence rates in a scenario in which 10% of isolates were resistant to treatment would be ≈7% higher than in a scenario of no drug resistance, although the cumulative effect of resistance over time could be more substantial.

At least 2 possible explanations exist for the observed association. First, treatment failures or delays in clearance of infections caused by ciprofloxacin resistance might have increased the duration of infectivity and facilitated transmission to partners. Second, mutational changes in the organism that conferred resistance or co-occurred with resistance determinants might have supported gonococcal transmission. This possibility is suggested in the study reported by Kunz et al. that mutant gyrase (gyrA)91/95 alleles in N. gonorrhoeae appeared to provide fitness benefit (20).

STD surveillance data are subject to limitations, such as incomplete reporting of cases and differences across jurisdictions in how data are collected (13). Furthermore, for most cities in our analysis, the city-specific STD rates we obtained were derived from county data and might only approximate data for city jurisdictions. However, our use of binary (dummy) variables for each city helps to guard against possible biases that arise because of constant differences across cities in STD reporting practices and the use of county-level data to approximate data for city jurisdictions. The sociodemographic variables we included might likewise only approximate those for city jurisdictions because some of these variables were based on county data and some were based on metropolitan statistical area data. However, biases in the sociodemographic variables are unlikely to have influenced our findings substantially because the association we observed between ciprofloxacin resistance and gonorrhea incidence was consistent regardless of whether the sociodemographic variables were included in the model.

We assumed that the ciprofloxacin resistance in isolates collected from STD clinic(s) in a given city in a given year reasonably represent resistance for the entire city in the given year. Although overall prevalence of gonorrhea in STD clinics is not representative of the overall population because STD clinic attendees are generally at higher risk, those infected with gonococcal infections with lower (or greater) antimicrobial drug susceptibility are unlikely to preferentially attend these clinics. Because our analysis was limited to cities for which GISP susceptibility data and city-level gonorrhea incidence were available, the cities in our study might not be representative of other US cities.

Ciprofloxacin resistance was associated with increases in gonorrhea incidence rates during the late 1990s and 2000s despite availability of other well-studied recommended treatment options. Correspondingly, emerging cephalosporin resistance could have even more substantial health and economic consequences, particularly as the number of available treatment options decreases. Efforts to control the spread of drug-resistant strains may mitigate this possible effect.

Dr Chesson is a health economist at the Centers for Disease Control and Prevention, Atlanta, Georgia. His research interests include assessments of the impact and cost-effectiveness of STD prevention programs and policies.

Page created: March 12, 2014
Page updated: March 12, 2014
Page reviewed: March 12, 2014
The conclusions, findings, and opinions expressed by authors contributing to this journal do not necessarily reflect the official position of the U.S. Department of Health and Human Services, the Public Health Service, the Centers for Disease Control and Prevention, or the authors' affiliated institutions. Use of trade names is for identification only and does not imply endorsement by any of the groups named above.