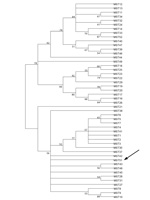 The first case was detected in 2007 in a 45-year-old man in Saudi Arabia who had fever, pneumonia, and asthenia. A transesophageal echocardiogram showed endocarditis. Results of an immunofluorescence assay were positive for C. burnetii; phase I titers for IgG, IgM, and IgA were 51,200, 100, and 25, respectively, and phase II titers were 102,400, 200, and 50, respectively. Serum and blood samples were negative for C. burnetii by real-time PCR for the IS1111 and the IS30A spacers (7). For each sample, the quality of DNA extraction was verified by real-time PCR for a housekeeping gene encoding β-actin (7). The aortic valve was surgically replaced, and C. burnetii–specific PCR results for the valve were positive. According to multispacer sequence typing (8), this C. burnetii isolate was a new genotype, MST51 (Figure). A C. burnetii isolate was cultured from the valve of this patient by the shell-vial method that used human embryonic lung cells (7). IgG anticardiolipin testing results were negative (9). The patient was given 200 mg oral doxycycline daily and 200 mg oral hydroxychloroquine 3 times daily for 18 months.

The second case was detected in 2012 in a 13-year-old boy in Saudi Arabia who had tetralogy of Fallot, a prosthetic pulmonary valve, 2 intracardiac stents, and long-term fever. Serologic testing results were positive for C. burnetii; phase I titers for IgG, IgM, and IgA were 51,200, 400, and 200, respectively, and phase II titers were 102,400, 800, and 400, respectively. Whereas serum and blood samples were negative for C. burnetii by real-time PCR for the IS1111 and the IS30A spacers, the β-actin control was positive (cycle threshold <30). For this patient, we did not receive any material for culture. The patient was given 200 mg oral doxycycline daily and 200 mg oral hydroxychloroquine 3 times daily for 18 months.

To the best of our knowledge, before the 2 cases presented here, only 3 cases of Q fever endocarditis in Saudi Arabia have been described; all patients were from rural regions of Saudi Arabia and had an underlying valvulopathy (4–6). Moreover, Q fever was not immediately suspected, and as a result, 1 patient died (6). However, for 2 other patients, valve replacement was necessary (4,5). Q fever is prevalent in Saudi Arabia, and the very high prevalence of Q fever among camels was proposed as the reason Q fever is endemic among humans in Saudi Arabia (2,3). Camels were also suspected as the probable source of acute Q fever in US soldiers returning from Saudi Arabia (10). We identified a new C. burnetii genotype in the aortic valve of the first patient reported here. More epidemiologic studies are needed to determine whether this novel genotype circulating in Saudi Arabia is endemic to Saudi Arabia and whether it plays a major role in the origin of Q fever and in public health in this country.