Although infectious diseases continue to account for considerable illness and death worldwide (1,2), mortality rates for these diseases in industrialized countries decreased considerably by end of the twentieth century (1–4). The decrease in infectious disease mortality rates was caused by a set of complex factors fundamentally linked to development, such as better sanitation as populations became more urban, and improvements in infrastructure, nutrition, and biotechnological advances, particularly in the field of vaccines and antimicrobial drugs (5). This reduction was reflected mainly in the decrease of child mortality rates. At the beginning of the twentieth century, 30% of all deaths caused by infectious diseases were among children <5 years of age; by the end of the twentieth century, these diseases accounted for only 1.4% of all deaths (3). In the 1980s, the decreasing trend of the infectious disease mortality rate in industrialized countries was interrupted by the HIV/AIDS epidemic, which confronted the scientific community and health authorities with the challenge of a new emerging infection that has still not been controlled.

In Spain, as in other industrialized countries, mortality rates decreased overall and for children over the course of the twentieth century, life expectancy increased dramatically. The progressive decrease in deaths from infectious causes was interrupted by the HIV/AIDS epidemic, which changed the trend and pattern of infectious diseases for the population overall and for specific age groups affected (6). New antiretroviral therapies introduced in the mid-1990s decreased deaths caused by HIV/AIDS, as well as deaths caused by other infectious diseases. However, other threats to human health related to emergence and reemergence of infectious disease have arisen (7), mainly because of environmental and climate changes, travel and trade, human behavior, new technologies, microbial adaptation, and host-impaired immunity (8). These continuous threats make specific infectious disease surveillance and control programs even more necessary (8).

In Spain, the source of mortality rate statistics is the medical death certificate, a compulsory administrative document that is completed by the physician who certifies the death. Data are subsequently forwarded to the regional mortality registries where causes of death are coded according to ICD guidelines. According to World Health Organization recommendations, the cause of death that is ICD coded should be taken as the underlying cause of death (11).

We analyzed ICD codes of underlying causes of death provided by the Spanish National Statistics Institute (NSI). We selected deaths caused by infectious causes corresponding to ICD-9 codes for 1980–1998 and ICD-10 codes for 1999–2011. From the ICD-9 and ICD-10 codes, we selected all codes of infectious and parasitic diseases and other infectious causes from remaining groupings (Table 1). Of these diseases, 10 that accounted for >90% of all deaths (pneumonia, septicemia, cardiac infections, AIDS and HIV infection, renal infections, tuberculosis, acute respiratory infection, influenza, viral hepatitis, and intestinal infections) were independently selected. For HIV/AIDS, data collection began in 1989 when a newly created specific ICD-9 code was assigned and began to be used in Spain; related diseases were previously allocated to unspecified immunity disorders.

We calculated the crude mortality rates by using population data drawn from NSI population projections. Age- and sex-adjusted rates were calculated by using the direct method and the standard European population as a reference.

We analyzed the trends according to sex, age group (<1–4, 5–24, 25–44, 45–64, and ≥65 years), and for each of the 10 first-selected diseases. We computed the sex ratio of the adjusted rates to assess sex-related differences. Subsequently, we analyzed the trends of death rates by using a joinpoint regression model to estimate the annual percentage change (APC) and to identify trend inflection points (joinpoints) when present. An inflection point was defined as the year representing the final endpoint of 1 period and the initial endpoint of a subsequent period; thus, all periods overlap. For each period, an APC was calculated.

We computed APC for each trend by using generalized linear models and assuming a Poisson distribution (12). This analysis initially assumes that there are no joinpoints and iteratively fits models until a curve with the minimum number of joinpoints is selected by using permutation tests (13). Adjusted rates and SEs were used to fit all joinpoint models, except for analyses by age group, for which deaths and populations under a Poisson model were used. This method identifies through simulations the minimum number of inflection points (i.e., years when the trend is changing) and quantifies changes in trends through the APC. When the APC is positive and significant, it indicates that the trend is increasing. When the APC is negative and significant, it indicates that the trend is decreasing. 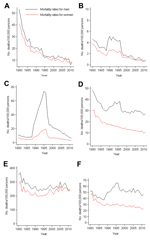 Our results showed that mortality rates for infectious diseases in Spain decreased overall, and that these decreases were only temporarily interrupted by the HIV/AIDS epidemic. Sex-specific mortality rates were higher for male patients across all age groups. Of the 10 first studied diseases, pneumonia showed the largest decrease in mortality rate.

Comparison of mortality rates for Spain with those for other countries in Europe is difficult because no standardized data are available, whether because such data solely take the traditional categories into account or because they refer to different periods. For 2010, Eurostat data (17) for the European Union (27 member states) showed an adjusted mortality rate of 8.7 deaths/100,000 persons for infectious and parasitic diseases and a male:female sex ratio of 1.7:1.

Our finding of higher mortality rates for male patients for nearly all infectious diseases analyzed, in particular for HIV/AIDS and tuberculosis, was consistent with higher illness rates for male patients because of biologic or behavioral factors (15,18). In general, these sex-related differences were similar to those for other countries in Europe (17).

The HIV/AIDS epidemic in Spain interrupted the decreasing trend of deaths caused by infectious disease in the late 1980s. The initial increase in the HIV/AIDS epidemic was caused mainly by use of shared needles and other items related to injection drug use (19). The efficacy of parenteral transmission caused this infection to spread rapidly, and during 1988–1997, Spain had the highest incidence of AIDS in Europe (20); the highest incidence was in 1994 (21). In 1996, highly active antiretroviral therapy (21) was introduced in Spain; it became widely available and was dispensed free of charge. This new treatment resulted in major changes in infectious disease trends in Spain and in mortality rates for AIDS in specific age groups.

In the youngest and oldest age groups, infectious disease mortality rates showed similar trends for both sexes. Children <1–4 years of age showed the sharpest continuous decrease, although this trend has shown a gradual leveling in the past 20 years, which is consistent with low mortality rates for children already observed (22,23). However, infectious diseases still account for 12% of all deaths in this age group, a finding consistent with reports from other countries (24,25).

Persons ≥65 years of age were the only age group for whom infectious disease mortality rates increased after the early 1990s, in contrast to a previously decreasing trend (10). In this age group, 5 infectious diseases accounted for 4%–7% of all deaths. This trend was essentially caused by deaths of persons in the oldest age group (>80 years), whose relative effect on this trend has increased because of an increase in life expectancy (82 years in 2011). Currently, persons >65 years of age make up 17% of the population of Spain. Of these persons, 14% are >85 years of age. In a health system that provides universal coverage, hospitalization of this frequently immunodeficient elderly population increases the risk for infection. Therefore, septicemia and renal infections are the main causes of the increase in infectious disease mortality rates, as reported for other countries (26). However, the 3 other causes (pneumonia, cardiac infections, and respiratory infections), which along with those mentioned, accounted for 90% of the infectious disease mortality rate in elderly persons, have had no role in this increase.

In addition to the increase in septicemia and renal infections, attention should be given to deaths caused by viral hepatitis, a disease that initially showed low mortality rates. However, these rates have increased 9-fold over the past 20 years. This cause of death, which accounted for 4% of deaths caused by infectious diseases, had the highest APC for the study period, and its increase has been especially evident among persons >45 years of age, in particular, those >65 years of age. The increase in deaths caused by viral hepatitis has partly paralleled the AIDS epidemic because both diseases have similar transmission mechanisms. The incidence of hepatitis C has increased in Europe and that of hepatitis B has generally decreased (27), probably because of vaccination.

Among relevant infectious respiratory diseases at the beginning of the study period, only pneumonia retained its role as the leading infectious cause of death. Deaths caused by respiratory tuberculosis were surpassed by deaths caused by septicemia, a disease that accounted for 16.6% of deaths caused by infectious diseases. Tuberculosis mortality rates showed a decreasing trend because of lower incidence and efficacy of treatment. AIDS initially led to a reemergence of tuberculosis but has since tended to mask this reemergence, probably because AIDS has being increasingly listed as the underlying cause of death on death certificates.

This study had 3 principal limitations. First, cause-specific death statistics in Spain include only the primary underlying cause of death (11), which omit possible contributions of other infectious causes and result in underestimation of deaths caused by infectious diseases, a finding that could be detected only by using multiple coding (28). Second, in 1998 Spain replaced ICD-9 with ICD-10, a decision that might have been led to problems of standardization of disease coding and discontinuity in assessment of trends. Third, we were not able to include factors such as improvements in diagnosis and medical practices.

In conclusion, despite a decrease in deaths caused by infectious diseases that was interrupted by HIV/AIDS, infectious diseases continue to be a major cause of death, which is an indicator of their role in public health. In the twenty-first century, the incidence of such diseases might be increased by a series of factors (7,29), ranging from climate change, which alters the ecology of vectors, to globalization, which involves exchange of goods and mobility of persons for leisure, occupational, or survival purposes. Notable among these factors is excessive use of antimicrobial drugs (30) among humans and animals. This excessive use is a fundamental cause of increases in bacterial drug resistance and is responsible for 25,000 deaths annually in Europe (31). Newly resistant or multidrug-resistant bacterial strains are more lethal, and emerging or reemerging diseases caused by these strains would be more difficult to control.

In addition to the aforementioned factors, the economic crisis in Europe has resulted in a decrease in health expenditures; public health services have been the most affected by budget cuts (32). Among these services, prevention programs, such as disease surveillance and control systems that target populations at risk for infectious diseases, have been greatly affected by underfunding (32). In this situation, information provided by vital statistics complements these services for retrospective assessment of trends of infectious disease mortality rates in Spain (33).

Dr López-Cuadrado is a researcher at the National Center for Epidemiology of the Institute of Health Carlos III, Madrid, Spain. Her primary research interest is epidemiology of infectious diseases and statistical methods to investigate them.

We thank the HIV Surveillance Unit of the Institute of Health Carlos III, especially Asunción Diaz, for providing comments on this article.

Page created: April 16, 2014
Page updated: April 16, 2014
Page reviewed: April 16, 2014
The conclusions, findings, and opinions expressed by authors contributing to this journal do not necessarily reflect the official position of the U.S. Department of Health and Human Services, the Public Health Service, the Centers for Disease Control and Prevention, or the authors' affiliated institutions. Use of trade names is for identification only and does not imply endorsement by any of the groups named above.