Rotavirus A (RVA) genotype G1P[8], a hallmark of the Wa-like strain, typically contains only genotype 1 genes. However, an unusual RVA G1P[8] with genotype 2 genes was recently detected in Japan. We determined the complete genomic constellation of this RVA. Our findings suggest that mixed RVAs may be more competitive than once thought.

It is estimated that rotavirus A (RVA), the leading cause of severe gastroenteritis in children worldwide, causes >500,000 deaths among children each year, primarily in developing countries (1). Genes of viral protein (VP) 7 and VP4 form the basis of a dual classification system that defines the RVA G- and P-types, respectively. Five G-types (G1–4 and G9) and 3 P-types (P[4], P[6], and P[8]) represent most of the G-P–combined RVA strains (2). RVAs are classified on the basis of a system that assigns a specific type to each of the 11 RNA gene segments, according to established nucleotide percentage cutoff values (3).

We identified and characterized a prevalent genotype G1P[8] RVA with genotype 2 genes. The RVA was detected during rotavirus gastroenteritis outbreaks in Japan.

During 2009–2013, a total of 21 RVA-associated gastroenteritis outbreaks occurred among children ≤7 years of age in Osaka City, the third largest city in Japan; 20 of the outbreaks were in nursery schools and 1 was in a primary school (Table 1). To determine which outbreaks were associated with RVA, we tested fecal samples from children who became ill during the outbreaks. An RVA-associated outbreak was defined as a gastroenteritis (vomiting and/or diarrhea) outbreak among >8 children who were epidemiologically linked, among whom >2 had RVA-positive ELISA results by our testing. Analyses to determine epidemiologic links included age, outbreak setting, person-to-person virus transmission, and date of symptom onset. 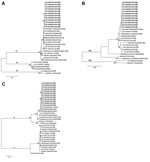 The extent of rotavirus vaccination in Japan has varied, so the level of vaccine coverage in the country is unknown. Thus, it is unclear whether the emergence of strain DS-1–like G1P[8] was caused by vaccine pressure. The introduction of rotavirus vaccines must be followed by full genomic analysis of RVA so that reassortants between wild-type and vaccine strains can be monitored. Such analyses may also lead to the discovery of new wild-type reassortants with unusual genome constellations and provide us with plausible explanations for rotavirus epidemics.

It is unclear why some RVA G/P-types have pure genogroup genomic constellations (5). Although the whole VP7 and VP4 amino acid sequences of strains HC12016 and 2007719635 are identical (data not shown), strain HC12016 contains genes that encode DS-1–like proteins. In contrast, strain 2007719635 is a pure Wa genogroup member, which suggests that G1P[8] type outer capsid proteins encoded by strain HC12016 are compatible with Wa-like and DS-1–like backbones. In other words, the DS-1–like G1P[8] seems to retain its fitness, even though it is the progeny of a reassortment event between viruses of different genogroups. Further studies using DS-1–like G1P[8] strains may provide key insights into preferred combinations of RVA genes derived from different genotypes.

Dr Yamamoto is a research scientist at Osaka City Institute of Public Health and Environmental Sciences. His research interests include the molecular biology and molecular epidemiology of gastroenteritis viruses.

We thank Niichiro Abe, Kaoru Goto, and Atsushi Hase for supporting our work. We are also grateful to Peter Gee for proofreading and commenting on the manuscript.