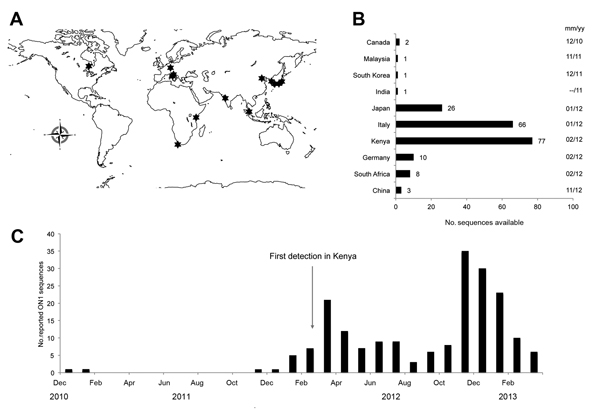 Figure 3. A) Geographic locations (indicated by stars) where respiratory syncytial virus genotype ON1 sequences had been detected and reported as of September 8, 2013B) Number of ON1 sequences present in GenBank as of September 8, 2013, including sequences submitted for the viruses detected in Kilifi, Kenya, during 2012The month and year that the first ON1 virus was reported for each country is given on the far rightC) Monthly reported detections of the ON1 viruses with sequences from the combined worldwide datasetThe month of first ON1 detection at Kilifi is indicated by an arrowNote that the data presented in this figure have not been systematically collected to represent the geographic and temporal distribution of the ON1 genotypeInstead, the data are derived from sequence submissions to GenBank, with inherent sampling bias, that do not necessarily reflect the total number of cases from the different locations; the submissions do, however, indicate the rapid spread of the genotype.