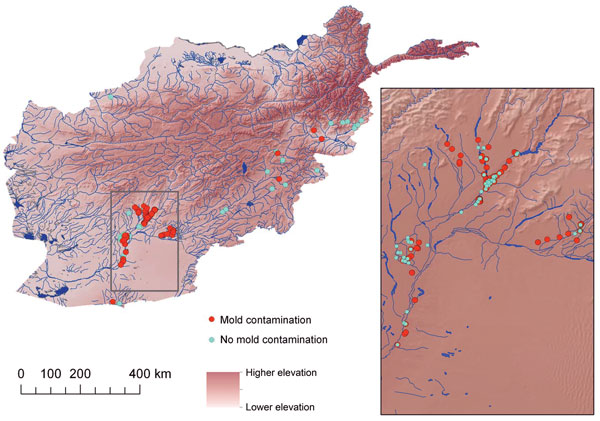 Figure 2. Geographic distribution of military personnel with wounds contaminated by mold (n = 101) and control-patients (n = 66), Afghanistan, 2009–2011. Inset shows detail view of southern Afghanistan region where most cases originated. The mold contaminated group includes 7 patients for whom cultures did not show mold growth, but were diagnosed with invasive fungal wound infections (IFIs) on the basis of histopathologic examination. Five patients with injuries sustained outside the study regions were excluded from the analysis (including 1 patient with IFI), but remain visible on the map (i.e., 1 point in western region, 2 in the southernmost point of Helmand Province below the box indicating the southern analysis region, and 2 in Zabul Province between the southern and eastern regions). Because injuries frequently occurred in close proximity, some points overlay other points. The mold contamination points are on top on the overview map and on the bottom in the enlarged inset. Higher elevation is indicated by darker brown.

1A portion of this material was presented at the Military Health System Research Symposium, August 18–21, 2014, Fort Lauderdale, Florida, USA.