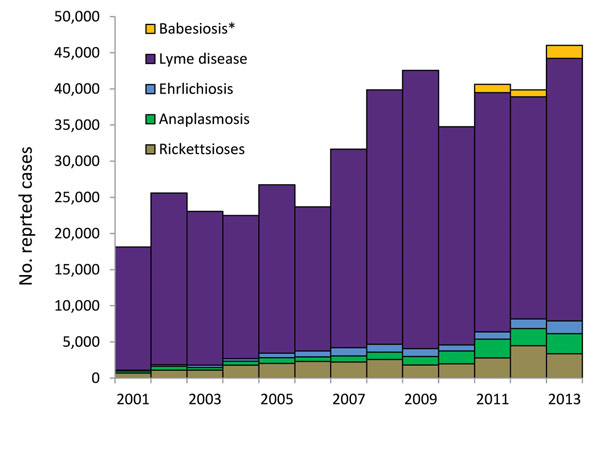 Figure 2. US cases of Lyme disease, ehrlichiosis, anaplasmosis, babesiosis, and spotted-fever group rickettsioses reported to the Centers for Disease Control and Prevention, 2001–2013. Counts include confirmed and probable cases, according to the case definition in effect in each year. Anaplasmosis cases were reported as human granulocytic ehrlichiosis before 2008. Ehrlichiosis refers to infections caused by Ehrlichia chaffeensis, E. ewingii, and undetermined species. *Babesiosis was first designated a nationally notifiable condition during 2011.

Page created: August 17, 2015
Page updated: August 17, 2015
Page reviewed: August 17, 2015
The conclusions, findings, and opinions expressed by authors contributing to this journal do not necessarily reflect the official position of the U.S. Department of Health and Human Services, the Public Health Service, the Centers for Disease Control and Prevention, or the authors' affiliated institutions. Use of trade names is for identification only and does not imply endorsement by any of the groups named above.