Zika virus is an arthropodborne RNA virus primarily transmitted by mosquitoes of the species Aedes (1). The virus has 2 genotypes: African, found only in the continent of Africa; and Asian, associated with outbreaks in Southeast Asia, several Pacific islands, and, recently, the Americas (2). In May 2015, Brazil reported its first autochthonous cases of Zika virus infection, which occurred in northeast Brazil (3,4). As of June 30, 2016, all 27 federal states in Brazil had confirmed Zika virus transmission (http://www.paho.org/hq/index.php?option=com_docman&task=doc_view&Itemid=270&gid=35262&lang=en).

The rapid geographic expansion of Zika virus transmission and the virus’s association with microcephaly and congenital abnormalities (5) demand a rapid increase in molecular surveillance in areas that are most affected. Molecular surveillance is particularly relevant for regions where other mosquitoborne viruses, particularly dengue and chikungunya viruses, co-circulate with Zika virus (2); surveillance on the basis of clinical symptoms alone is highly inaccurate. Genetic characterization of circulating Zika virus strains can help determine the origin and potential spread of infection in travelers returning from Zika virus–endemic countries. Previous analyses have suggested that Zika virus was introduced in the Americas at least 1 year before the virus’s initial detection in Brazil (1). The state of Bahia, Brazil, reported most (93%) suspected Zika virus infections in Brazil during 2015 (2), including cases of Zika virus–associated fetal microcephaly (6); however, except for 1 complete genome, no genetic information from the region has been available (2,7). We report molecular epidemiologic findings resulting from 11 new complete and partial Zika virus genomes recovered from serum samples from patients at the Hospital Aliança in the city of Salvador in Bahia, Brazil.

Multiple sequence alignment was performed by using MAFFT version 7 (http://mafft.cbrc.jp/alignment/software/); maximum-likelihood (ML) and Bayesian phylogenetic inferences were determined by using PhyML version 3.0 (http://www.atgc-montpellier.fr/phyml/) and BEAST version 1.8.2 (http://beast.bio.ed.ac.uk/), respectively. The best-fit model was calculated by using jModelTest2 (https://github.com/ddarriba/jmodeltest2; details in Technical Appendix). Coding regions corresponding to the 11 complete or partial genomes from Bahia were aligned with all published and available near-complete Zika virus genomes and longer subgenomic regions (>1,500 nt) of the Asian genotype as of April 2016 (mean sequence size 8,402 nt with 1,652 distinct nucleotide site patterns). The ML phylogeny was reconstructed by using the best-fit general time-reversible nucleotide substitution model with a proportion of invariant sites (GTR+I). Statistical support for phylogenetic nodes was assessed by using a bootstrap approach with 1,000 bootstrap replicates. A Bayesian molecular clock phylogeny was estimated by using the best-fitting evolutionary model (2); specifically, a GTR+I substitution model with 3 components: a strict molecular clock, a Bayesian skyline coalescent prior, and a noninformative continuous time Markov chain reference prior for the molecular clock rate. 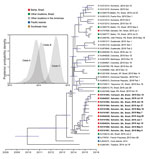 The isolates from patients in Salvador clustered together within 1 strongly supported clade (posterior probability 1.00, bootstrap support 100%, Bahia clade C) (Figure; Technical Appendix Figure 2). This support is notable; most Zika virus genomes in this clade are incomplete, and uncertainty is accounted for in phylogenetic inference. The tree topology accords with previous findings (2,4,5), and time to most recent common ancestor (TMRCA) of the epidemic in the Americas is similar to that previously estimated (2) (American epidemic clade A; Figure). The overall ML and molecular clock phylogenies exhibited many well-supported internal nodes with bootstrap support >60% and posterior probability >0.80 (Figure; Technical Appendix Figure 2), although several nodes near the ancestor of clade A were less well supported.

The updated phylogenetic analyses, including the newly identified clade C, suggest that Zika virus was introduced in Bahia during March–September 2014. An isolate from Maranhão in northeastern Brazil (≈1,000 km from Bahia) is ancestral to the Bahia clade (posterior probability 1.00, bootstrap support 74%, northeastern Brazil clade B) (Figure; Technical Appendix Figure 2). The TMRCA of clade B (comprising the Bahia clade and the Maranhão sequence) is estimated to be September 2013–April 2014, an early stage of the epidemic. This TMRCA is consistent with the hypothesis that Zika virus in the Americas originated in Brazil (2). A previously reported sequence from Bahia (6) clustered with an isolate from Belém in the state of Pará in northern Brazil, ≈3,000 km from Bahia (posterior probability 0.99, bootstrap support 81%) (Figure; Technical Appendix Figure 2). The patient denied history of travel, suggesting that multiple Zika virus lineages may circulate in Bahia.

Our results suggest an early introduction and presence (mid-2014) of Zika virus in the Salvador region in Bahia, Brazil. Given the size of the cluster and statistical support for it, this lineage likely represents a large and sustained chain of transmission within Bahia state. Most cases of this Zika virus lineage clustered closely to a sequence from Maranhão, and we found evidence for an additional potential introduction to Bahia from Pará state. Consequently, Zika virus in Salvador during mid-2014 was likely introduced from other regions in Brazil rather than from outside the country. Current findings of Zika virus emergence in Bahia state during mid-2014 are consistent with first-trimester viral infection in pregnant women corresponding to the initial reported cases of fetal microcephaly, which began in January 2015 (5) and peaked in November 2015.

Broader sampling across Bahia is needed to determine whether the Salvador lineage (clade C) identified in this article comprises most Zika virus cases in the state. Brazil currently faces a major public health challenge from co-circulation of Zika, dengue, and chikungunya viruses (2–4,14,15). Additional molecular surveillance in the Americas and beyond is urgently needed to trace and predict transmission of Zika virus.

Dr. Naccache is a researcher at the University of California, San Francisco; her interests are genomic assay development for clinical infectious disease diagnosis and sequencing-based characterization of emerging viruses. Dr. Thézé is a postdoctoral researcher in computational biology at the University of Oxford, UK; he is interested in viral evolution, especially the spatiotemporal dynamics of pathogen spread.

We thank multiple researchers worldwide for permission to include their unpublished Zika virus genomes in our analysis.

This study was supported in part by Fundação de Amparo a Pesquisa do Estado da Bahia, the European Research Council under the European Union’s Seventh Framework Program (FP7/2007-2013)/ERC grant agreement no. 614725-PATHPHYLODYN, National Institutes of Health grants R01-HL105704 and R21-AI120977 (C.Y.C.), and a viral discovery award from Abbott Laboratories, Inc. (C.Y.C.). This study was made possible by the generous support of the American people through the United States Agency for International Development Emerging Pandemic Threats Program-2 PREDICT-2 (Cooperative Agreement No. AID-OAA-A-14-00102).