We conducted a randomized, controlled trial to test the effectiveness of a text-messaging system used for notification of disease outbreaks in Kenya. Health facilities that used the system had more timely notifications than those that did not (19.2% vs. 2.6%), indicating that technology can enhance disease surveillance in resource-limited settings.

Widespread expansion of mobile phone coverage in Africa (4) offers opportunities to overcome weaknesses in health systems and to improve medical and public health practice through mobile health (mHealth) (5). Despite many mHealth projects undertaken in Africa, their effectiveness has rarely been rigorously evaluated, limiting evidence-based policy adoptions or project expansion in scope or geography (6–9). In particular, evidence of effectiveness of mHealth interventions for enhancing disease surveillance is scarce (10). We undertook a clustered, randomized, controlled trial with 135 health facilities in Busia and Kajiado Counties in Kenya during November 2013–April 2014 to test the effectiveness of a mobile short-message-service (SMS)–based disease outbreak alert system (mSOS) for reporting immediately notifiable diseases.

mSOS is a formatted text-messaging system that enables communications between healthcare facility workers and Ministry of Health managers and uses a Web-based portal to monitor disease notifications and response actions taken by health managers (Figure 1; online Technical Appendix, http://wwwnc.cdc.gov/EID/article/22/4/15-1459-Techapp1.pdf). In our trial, health workers used mSOS for 6 months to send information about suspected cases or health events that required notification within 24 hours. Twelve diseases and conditions were selected for the study (online Technical Appendix Table 1). Before mSOS was implemented, we conducted a 1-day refresher training course on IDSR for in-charges (i.e., medical officers in charge) of 135 participating health facilities; the training focused on case definitions of notifiable diseases and on paper-based reporting. During the training, facilities were randomized into intervention and control groups; the intervention group received an additional day of training on mSOS. Paper-based reporting continued throughout the study period for both groups, so the intervention group would report cases 2 ways. 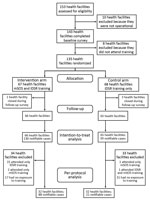 Figure 2. Profile of control and intervention health facilities and exclusions during the course of a study of a mobile short-message-service–based disease outbreak alert system (mSOS) in Kenya. IDSR, Integrated Disease Surveillance and...

Our primary outcome was determining how many of the cases that required immediate notification were reported within the time specified. Our secondary outcome was determining, from among the cases for which notifications were sent, the proportion for which response actions were taken. For evaluation purposes, data from health facilities were collected for 6-month periods before and after the intervention launch (i.e., IDSR and mSOS training and use of mSOS for 6 months). Cases detected, notifications submitted, and responses undertaken were extracted from facility records in both study groups. Notifications sent by SMS were retrieved from the mSOS system. Our primary analysis was intention-to-treat (i.e., analysis of cases from all health facilities as they were randomized, regardless of intervention exposure). Our secondary analysis was per-protocol (i.e., our trial protocol) and was restricted to cases reported by facilities whose in-charges had received training (i.e., IDSR training for control group; IDSR and mSOS training for intervention group; Figure 2).

All 25 cases for which notifications were sent from the intervention group were measles cases reported through mSOS; 2 cases were also reported with paper forms. For these 25 mSOS notifications, the threshold for a measles outbreak response (5 suspected cases) was met once, and disease surveillance coordinators at the subcounty level responded to this event. Furthermore, 24 (96%) of the 25 suspected measles cases were reported within 24 hours.

This study showed that SMS intervention significantly increased timely notifications; however, despite a relatively large improvement, response remained suboptimal, with timely notifications of only one fifth of detected cases. These findings mirror results of a study in Tanzania, which showed that SMS considerably increased vital registration coverage but fell far short of reporting actual birth and death events in the community (12).

Our study has implications for health managers who implement interventions to improve disease surveillance in resource-limited settings. First, the number of detected cases requiring immediate notification increased postintervention. This effect was observed in both intervention and control groups but was higher in the group using SMS; this group had a 7-fold increase in detected cases compared with baseline findings. IDSR refresher training may have contributed to increased case detection, and the combined interventions, including the technology component, resulted in a greater detection effect. Second, expecting health workers to complete paper-based forms and deliver them without incentive within 24 hours is ineffective for ensuring notification of cases, with or without exposure to the refresher training. Third, we observed a large drop-out rate (47.4%) for health facility in-charges participating in the study. The study took place during a period of health management decentralization in Kenya, resulting in 47 new counties and in health worker transfers. Lack of on-the-job training for staff who did not attend the training and lack of support through posttraining follow-up and supportive supervision were weaknesses in the intervention. These systemic challenges, reported in other IDSR (13) and mHealth surveillance (14) projects, must be addressed to avoid compromising the sustainability of such interventions. Finally, attrition of health workers exposed to the intervention and lack of paper-based tools explain only part of our results. The short duration of the training deployed (15) and the possibly suboptimal quality of the training delivered (3) may have contributed to the unrealized full potential of the intervention.

Despite its limitations (online Technical Appendix), this study shows how technology in the form of mSOS can increase the rate of notifications of suspected disease outbreaks and enhance IHR compliance in resource-limited settings. Further investigation into ways to optimize the quality of delivery of mSOS interventions in countries with weak healthcare systems is justified.

Ms. Toda is a public health specialist who focuses on health systems research in developing countries. She is currently a Japan International Cooperation Agency expert who provides technical support for strengthening disease surveillance at the Ministry of Health in Kenya.

We thank the Disease Surveillance and Response Unit at the Ministry of Health in Kenya and the Strathmore University Faculty of Information Technology for their tireless efforts to develop mSOS. We also thank the Kajiado and Busia County governments and the disease surveillance coordinators in the subcounties for their support. We are also grateful for field interviewers’ work during the baseline and follow-up surveys and for statistical advice from Stella Karuri.

This study was supported by the Japan International Cooperation Agency and the Japan Agency for Medical Research and Development under the Science and Technology Research Partnerships project in Kenya (2012-2017). The study is published with the permission of the Director of KEMRI.