To the Editor: The etiologic agent of the sixth pandemic of cholera was classical biotype of Vibrio cholerae O1. The ongoing seventh pandemic is caused by El Tor biotype. The biotypes are differentiated by phenotypic and genotypic characteristics. However, this differentiation blurred when V. cholerae O1 strains were detected in Matlab, Bangladesh, in 2006, in which characteristics were mixed. Genetically, the differences occurred in tcpA, which encodes the major adherence antigen rstR that regulates site-specific recombination of CTXϕ phage and ctxB that encodes the B subunit of cholera toxin. These genes had the characteristics of classical biotype in Matlab variants of El Tor strains. Later, various types of El Tor variants were reported in Southeast Asia, Africa, and Haiti. Differentiating features also occur in repeat toxin A gene (rtxA), chromosomal location of CTXϕ, the number of heptad repeats in ToxR binding region, and the occurrence of vibrio seventh pandemic islands I and II (1,2).

The first case was in a 19-year-old Kuwaiti man who visited Najaf and Karbala in Iraq in September 2015; the second case was in a 52-year-old Kuwaiti woman who visited the same 2 locations in October 2015. Both had watery diarrhea 3–4 times daily and vomiting; they returned to Kuwait and were admitted to Al Amiri Hospital (Sharq, Kuwait). They gave histories of drinking local water in Iraq, had moderate dehydration, and were treated with intravenous rehydration solution and a single doxycycline dose (500 mg). Diarrhea resolved after 2–3 days. 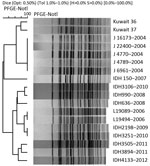 Figure. Comparison of PFGE patterns of NotI-digested chromosomes of Vibrio cholerae O1 isolates from Kuwait with those of isolates obtained from various years (indicated by last 4 digits) from Kolkata, India. The...

We studied the genotype of ctxB using a double-mismatch amplification mutation PCR (i.e., mismatches in both primers). PCR with classical ctxB-specific primers ctxBF4/ctxBRvCla yielded an amplicon of 191 bp, but not with Haitian ctxB specific primers ctxBF3/ctxBRvCla, indicating that the isolates had a ctxB of classical biotype (genotype 1) (5,6). Mismatch amplification mutation assay PCR (MAMA-PCR, i.e., mismatch in only 1 primer) with Haitian-specific tcpA primers tcpAF2/tcpARev produced an amplicon of 167 bp but not with El Tor tcpA–specific primers tcpAF1/tcpAElRev, suggesting these isolates had the Haitian variant tcpA (2). MAMA-PCR for rtxA with El Tor–specific primer pair rtxAF/rtxAR1 yielded a 187-bp amplicon but no amplicon for Haitian variant primer pair rtxAF/rtxAR2, suggesting the occurrence of rtxA of El Tor variety (2). The isolates possessed El Tor type rstR because they produced a 500-bp amplicon with primer pair rstR2/rstA3R (7). The isolates were positive for rstC, a repeat sequence activator found in El Tor biotype, because they yielded an amplicon of 238 bp with primer pair rstC1/rstC2 (8). rstB is required for CTXϕ phage integration. The Haitian strain has a GTA deletion at positions 77–79. MAMA-PCR with primer pair rstB F1/rstB R1 produced a 160-bp amplicon, suggesting the absence of deletion in El Tor type rstB (2). The isolates had CTXϕ integrated in the large chromosome with RS element downstream because they produced a 766-bp amplicon with CII F/CII R primers (9). PCR sequencing with primers Zot F/ctxA R indicated the presence of 4 heptad (TTTTGAT) repeats in the ToxR binding region of ctxAB promoter, similar to El Tor biotype (2). Both isolates possessed vibrio seventh pandemic islands I and II, typical of El Tor biotype as assessed by PCRs with a variety of primers (10). Clonal relationship studied by pulsed-field gel electrophoresis suggested that isolates from the Kuwaiti patients were similar to each other and closer to Indian isolates of 2004 (Figure). Cholera is endemic to India; many El Tor variants circulate there (2).

We showed that the strain causing cholera in Iraq did not have the typical El Tor characteristics but instead had mixed characteristics of El Tor, classical, and Haitian strains. Altered strains of V. cholerae O1 might have implications for disease severity and vaccine efficacy (1). El Tor variants seem to be sweeping the world. We wonder whether they could replace the archetypal El Tor strain and become the causative agent of the eighth pandemic of cholera.