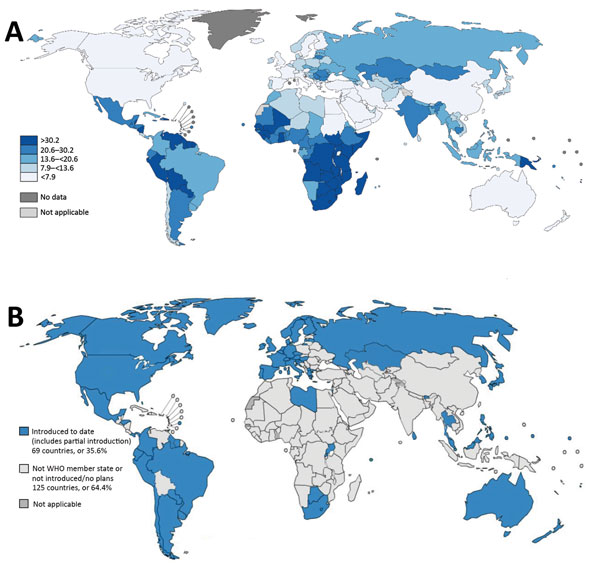 Figure. Worldwide cervical cancer incidence and human papillomavirus (HPV) vaccination status. A) Estimated cervical cancer incidence rates per 100,000 persons in 2012. Source: GLOBOCAN, 2012, WHO. B) Progress in HPV vaccine introduction in national immunization programs, 2016. Source: WHO, 2016. Many countries with high cervical cancer incidence rates (primarily countries in sub-Saharan Africa, Asia, and a few in Latin America) have not yet introduced HPV vaccination in their national immunization programs. Cervical cancer can also be prevented by screening and treatment for precancerous lesions; incidence and mortality rates in high-income countries have decreased largely because of effective screening programs. Data for cervical cancer screening coverage worldwide are limited; 2002 World Health Survey data showed that the proportion of women who had a Papanicolaou test in the previous 3 years greatly varied among countries; 11%–83% in industrialized countries, and 1%–73% in developing countries (5). WHO, World Health Organization.