An outbreak of febrile respiratory illness associated with human adenovirus (HAdV) occurred in the South Korea military during the 2014–15 influenza season and thereafter. Molecular typing and phylogenetic analysis of patient samples identified HAdV type 55 as the causative agent. Emergence of this novel HAdV necessitates continued surveillance in military and civilian populations.

HAdVs are a group of nonenveloped double-stranded DNA viruses comprising 7 species (A–G) and >50 types (3). HAdV types belonging to species B (HAdV-3, -7, -11, -16, -21) and E (HAdV-4) are commonly associated with respiratory infections in adults, particularly in military personnel (4). Novel types or genomic variants, such as HAdV-14 (3) and HAdV-7 (5), have been implicated in epidemics of severe infection. HAdV-55, another emerging type reported in China, Turkey, Spain, Singapore, and Israel (5,6), has been associated with severe clinical manifestations, which often lead to respiratory failure and death (7,8).

Since fall 2014, we have observed an outbreak of FRI and pneumonia in military personnel in South Korea. In addition to the increased incidence of FRI, patients experienced severe manifestations. We describe the epidemiologic, clinical, and molecular characteristics of FRI in the South Korea military during October 2014–May 2016.

We obtained data regarding temporal trends in FRI incidence from military sentinel surveillance, which has been monitoring weekly FRI rates since October 2011. Monthly numbers of patients with pneumonia (inpatients, outpatients, and emergency room patients) were extracted from a computerized data warehouse that stores data from all military hospitals. We identified pneumonia cases by using the International Classification of Diseases and Related Health Problems, 10th Revision, codes J12–J18. The influenza season, which starts in October and ends the following May, was used as a surrogate for the HAdV season in this study. More detaileds information on FRI surveillance is available in the Technical Appendix. 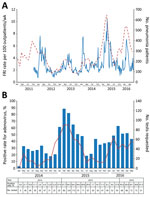 In April 2014, a multiplex real-time PCR for identifying 15 viruses from respiratory specimens was introduced at the Armed Forces Capital Hospital, the only tertiary hospital in the South Korea military health care system (detailed methods in Technical Appendix). A total of 1,484 nonduplicate specimens were tested by the end of May 2016 (Figure 1, panel B; Technical Appendix Table 1, Figure). HAdV was identified in 490 (33.0%) of total specimens, and it accounted for 79.7% (282/354) and 53.2% (150/282) of positive results in the 2014–15 and 2015–16 seasons, respectively. Increased HAdV activity was observed from December until the following May.

We reviewed the demographic and clinical information of 878 military patients with FRI or pneumonia who were tested for respiratory viruses from October 2014 through May 2016 (Tables 1, 2). Soldiers of lower rank were markedly more likely to infected with HAdV; soldiers serving in the Air Force were less likely. Patients who had been referred from other hospitals were twice as likely to be HAdV-infected than patients who visited the Armed Forces Capital Hospital directly. Rhinorrhea, sore throat, diarrhea, and nausea/vomiting were more common in patients with HAdV infection. The proportion of patients with pneumonia and the hospitalization rate did not differ between those with and without HAdV infection. However, HAdV-infected patients had a significantly higher risk of requiring intensive care or mechanical ventilator support. In the HAdV-infected group, 8 patients required intubation and 1 died; no one in the noninfected group died or required intubation. Length of hospital stay was also significantly longer among those the HAdV-infected group than among those in the noninfected group (12.6 vs. 9.4 days).

Figure 2. Phylogenetic analysis of human adenoviruses based on the partial nucleotide sequences of hexon (A) and fiber (B) genes, South Korea, 2016. Phylogenetic trees were generated by the neighbor-joining method, using the...

We conducted molecular typing by the sequencing of hexon and fiber genes with 74 HAdV-positive respiratory specimens collected from March through June 2016 (methods and general characteristics of the patients are available in the Technical Appendix Table 2). Among them, 49 samples were successfully sequenced (GenBank numbers in online Technical Appendix). Phylogenetic analyses showed that all 49 HAdV strains from South Korea clustered with HAdV-55 strains from China, Singapore, Taiwan, Spain, and the United States (Figure 2).

We describe an outbreak of FRI associated with HAdV in the South Korea military. HAdV is a well-known major cause of FRI in the military, accounting for >50% of FRI and pneumonia cases in military recruits (1). Our study also confirmed the predominance of HAdV, which was identified in 49.1% of specimens from patients with FRI or pneumonia. These findings are similar to those of previous studies from South Korea and the United States (9,10).

The most notable finding of our study is the emergence of HAdV-55 in the South Korea military. HAdV-55 is a novel type that has been associated with a severe clinical course and death in healthy young adults (7,8). We also found that HAdV infection was associated with intensive care, mechanical ventilator support, and longer hospital stay. In addition, we found that the only patient who died was HAdV infected. From a molecular perspective, HAdV-55 is a novel type with a hexon gene recombination between HAdV-11 and HAdV-14 (11). Phylogenetic analysis by using the hexon and fiber gene sequence of 49 strains collected in our study showed that they clustered with previously reported HAdV-55 strains.

Our findings have implications beyond military settings. Spread of infection of traditionally military-associated HAdV types into civilians has been recently reported in the United States and China (3,12,13). Thus, surveillance of HAdV types among both military and civilian populations is warranted; such measures are being implemented by the US Centers for Disease Control and Prevention (Atlanta, GA, USA) (12).

Our study has some limitations. First, our findings may not be generalizable due to the retrospective nature of the study. However, the military health system in South Korea provides healthcare exclusively to all military personnel; therefore, epidemiologic information gathered from our surveillance is accurate and comprehensive. Second, we conducted molecular typing with samples collected from February 2016, which was substantially later than the onset of the epidemic. However, HAdV-55 had already been identified in a case series from our center during June 2014–May 2015 (8). Because evidence shows that HAdV-55 has been already circulating since early 2014, we believe we can assume that HAdV-55 was the causative agent of the outbreak described in this study. Previously, the HAdV typing study conducted in 2007 reported HAdV-7 as the most prevalent type (14). Lack of continuous surveillance makes it difficult to estimate exactly when this novel type was introduced into South Korea.

Further genomic analysis of the collected samples and enhanced surveillance, including of civilian populations, would provide more information on the epidemiology of HAdV infection. In addition, studies are needed on the efficacy of previous vaccines against HAdV-55.

Dr. Yoo is a pulmonary physician and medical officer at the Armed Forces Capital Hospital of South Korea. His research interests include pulmonary infectious diseases.

We express our sincere gratitude to the healthcare professionals who have been involved in the care of the patients with FRI described in this study.

This work was supported by a grant from the Agency for Defense Development, Republic of Korea (UE134020ID).

1Preliminary results from this study were presented at the Annual Spring Meeting of the Korean Society for Chemotherapy, April 21–22, Seoul, South Korea.