Routine surveillance of influenza A virus was conducted in Myanmar during 2014–2015. Influenza A(H9N2) virus was isolated in Shan State, upper Myanmar. Whole-genome sequencing showed that H9N2 virus from Myanmar was closely related to H9N2 virus of clade 4.2.5 from China.

Influenza A(H9N2) virus has been found in several avian species. Despite low pathogenicity in poultry, H9N2 viruses are important to public health because of their high adaptability and frequent infection in humans. Clinical cases of H9N2 human infection have been reported in China (including Hong Kong) and Bangladesh (1,2). H9N2 viruss are constantly evolving and can reassort with other influenza A virus subtypes, resulting in novel influenza viruses. H9N2 was the likely donor of internal genes for the H5N1, H7N9, and H10N8 viruses (3,4).

During December 2014–August 2015, we conducted an influenza A surveillance program in Shan State, Myanmar. An outbreak of highly infectious avian influenza A(H5N1) in November 2007 has been the only outbreak reported in this state. For this study, we collected 648 samples from live-bird markets (LBMs) in Muse, Namkham, Laukkai, and Chinshwehaw, Shan State townships on the China–Myanmar border (Technical Appendix Figure 1). We collected oropharygeal swab specimens from chickens (n = 273) and ducks (n = 180) as well as environmental samples (n = 195). Identification and isolation were performed at the Livestock Breeding and Veterinary Department, Yangon, Myanmar (Technical Appendix). 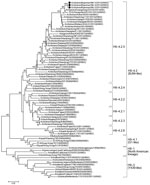 Figure. Phylogenetic tree of H9 gene of influenza A(H9N2) viruses from Myanmar and reference viruses. Phylogenetic trees were constructed by using MEGA version 6.0 (http://www.megasoftware.net/) and a neighbor-joining algorithm with the...

Internal protein gene analysis showed that the Myanmar H9N2 isolates possessed both avian- and human-specific amino acids. For example, no mutation was observed at E627 and D701 in PB2, retaining the avian characteristics (9), whereas human-specific amino acids were observed at 13P in PB1 and 409N in PA (10). Amino acids concerning virulence of the H9N2 viruses were also indicated. For example, the PA gene carried 672L and the NS1 gene contained 149A, relating to increased virulence of the virus (10). All Myanmar H9N2 viruses also possessed 31N in the M2 gene, suggesting amantadine resistance. Our results, based on the whole-genome analysis, showed that the Myanmar H9N2 viruses possessed all genetic signatures and virulence determinants similar to avian and human H9N2 viruses circulating in China in 2015 (Technical Appendix Tables 3–5).

In conclusion, the Myanmar H9N2 viruses were considered of low pathogenicity in chickens. However, public health concerns should be raised because the viruses are closely related tom and possess virulence determinants similar to, human H9N2 reported in China in 2015. The human cases likely represent a spillover of the virus to humans from poultry (8). The Myanmar H9N2 viruses were obtained from healthy chickens in LBMs near the China–Myanmar border, where sources of poultry are mostly from China. Because LBMs are the major sources of several subtypes of influenza viruses, this environment provides opportunities for influenza viruses to mix, be transmitted, and exchange their gene segments. Infection and transmission in humans and poultry can frequently occur in LBM settings. Therefore, public awareness, control measures, and routine disease surveillance should be implemented.

Dr. Lin, a veterinarian, is a PhD candidate at the Center of Excellence for Emerging and Re-emerging Diseases in Animals, Faculty of Veterinary Science, Chulalongkorn University, Bangkok, Thailand. His research interests are molecular epidemiology of emerging infectious diseases, especially influenza, in animals.

This research was supported by the National Research University Fund (NRU59-028-HR) and the research chair grant NSTDA (P-15-50004). Chulalongkorn University provided financial support to the Center of Excellence for Emerging and Re-emerging Infectious Diseases in Animals and the graduate scholarship for Neighboring Countries to T.N.L. The Thailand Research Fund (TRF) provided financial support to the TRF Senior Scholar (RTA5780006) to A.A.