Yellow fever virus RNA is usually detected in blood of infected humans. We detected virus RNA in urine and semen samples from a convalescent patient. A complete virus genome was sequenced for an isolate from a urine sample. This virus had a South American I genotype and unique synapomorphic changes.

Yellow fever virus (YFV) is a member of the genus Flavivirus and causes yellow fever in humans, characterized by fever, prostration, and hepatic, renal, and myocardial complications that lead to death in 20%–50% of cases (1). Clinical confirmation of YFV infections is based on detection of virus RNA in blood by reverse transcription PCR or antigen-based ELISAs. Detection of virus in urine samples has been used for confirming infections with flaviviruses, including West Nile virus (2), Zika virus (3), dengue virus (4), and YFV (5).

Despite availability of an effective vaccine, >200,000 cases of yellow fever and >30,000 deaths occur per year (6). A large epidemic of yellow fever with high death rates recently occurred in Brazil. In December 2016, the first cases of yellow fever during this epidemic were reported in Minas Gerais; cases were later identified in Espírito Santo, Goiás, Mato Grosso, Pará, Rio de Janeiro, São Paulo, Tocantins, and the Federal District. There were 792 confirmed cases and 274 deaths (case-fatality rate 35%) as of July 10, 2017 (7). We report a case of yellow fever in a 65-year-old man who was a native of São Paulo and had not been vaccinated against yellow fever. The study protocol was approved by the Ethics Committee on Research with Human Beings at the University of Sao Paulo. The patient provided informed consent for use of the samples during the study.

The patient was admitted to a public hospital in Januária on January 9. An ELISA for nonstructural protein 1 (NS1) of dengue virus showed a negative result. The patient also had severe thrombocytopenia (platelet count 77,000/mm3 [reference range 140,000–450,000/mm3]). 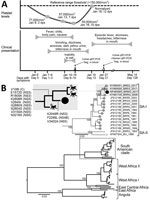 Figure. Clinical progression and detection of YFV RNA in urine and semen of convalescent patient, Brazil. A) Platelet levels, clinical parameters and symptoms, and test results over a 128-day period after initial...

On January 13, the patient returned to São Paulo and was admitted to a public hospital. Another ELISA for dengue virus NS1 was performed and showed a negative result. His platelet count decreased to 57,000/mm3. On January 16, the patient was admitted to a reference hospital for infectious diseases in São Paulo. He showed a moderate clinical presentation: anicteric form and mild spontaneous hemorrhage (ecchymosis in the right eye). High fever, gastrointestinal symptoms (vomiting and diarrhea), weakness, adynamia, and generalized myalgia were also observed. The patient had a weight loss of 4 kg over 8 days. Serum and urine samples were obtained (Figure, panel A; Technical Appendix).

On January 27, we obtained serum, urine, and semen samples and tested them by using qRT-PCR. Urine (Ct 28.57, 3.3 × 103 RNA copies/mL) and semen (Ct 31.00, 5 × 102 RNA copies/mL) samples were positive for YFV RNA. To evaluate infectivity, we tested a urine sample obtained on this date (Technical Appendix). We isolated YFV in cell culture, which confirmed virus integrity. We also confirmed infectivity after a second virus passage (Ct 24.35, 6.7 × 104 RNA copies/mL).

For the urine sample that was positive for YFV RNA by qRT-PCR, we directly characterized viral diversity by using next-generation sequencing (Technical Appendix). In South America, phylogenetic studies have inferred 2 circulating YFV genotypes. The isolate from our patient (BRMG-2017) clustered with South America I isolates, including 2 viruses isolated in 2017 in Espírito Santo, a state bordering Minas Gerais, and other viruses isolated previously in Brazil (Figure, panel B).

We did not observe any insertions or deletions in BRMG-2017 nucleotide sequences when compared with sequences of other South America I strains. However, several synapomorphic changes were detected (V108I [capsid], E1572D [NS3], R1605K [NS3], K2608R [NS5], V2645I [NS5], G2680S [NS5], N2804S [NS5], V3150A [NS5], and N3216S [NS5]). Most of these changes were located in the NS5 (RNA-dependent RNA polymerase) gene, which plays a major role in virus replication. Changes in the NS5 gene have been associated with differences in viral replication, immune response, and protein–protein interactions during virus replication.

Our results suggest that semen can be a useful clinical material for diagnosis of yellow fever and indicate the need for testing urine and semen samples from patients with advanced disease. Such testing could improve diagnostics, reduce false-negative results, and strengthen the reliability of epidemiologic data during ongoing and future outbreaks.

Dr. Barbosa is a veterinarian and doctoral candidate at the University of São Paulo, São Paulo, Brazil, and Pirbright Institute, Pirbright, UK. Her research interests are molecular biology, cell culture, and animal and human virology.