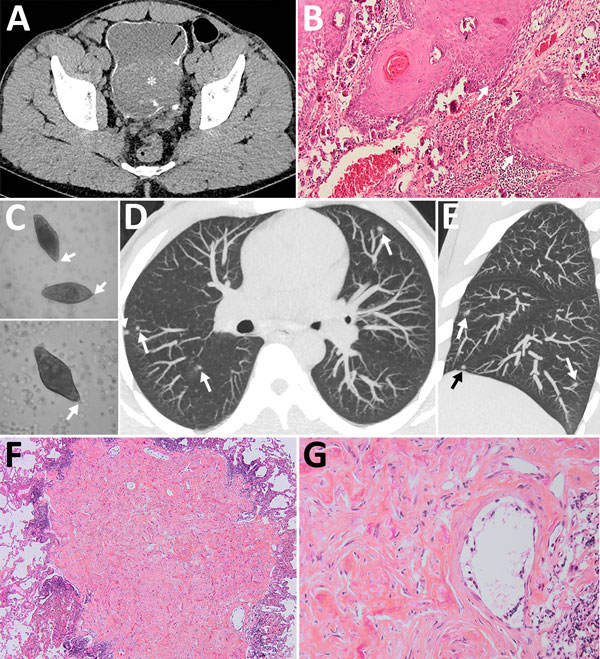 Figure. Schistosomiasis-induced squamous cell carcinoma of the bladder with pseudometastatic pulmonary nodules in a 30-year-old man from Mali. A) An unenhanced computed tomography axial image shows diffuse calcification of the bladder wall (arrow). A soft-tissue mass arises from the left posterolateral wall, breaching the calcifications and reaching the perivesical fat (asterisk). B) Anatomopathology slide stained with hematoxylin and eosin (original magnification ×10) of the bladder wall showing massive infiltration by a carcinomatous proliferation of the epidermoid type arranged in islands, or in broad cords in depth (arrows). The cells are large and polygonal, with eosinophilic cytoplasm. The papillomatous malpighian epithelium infiltrates the entire thickness of the chorion and the muscularis into the perivesical fat with venous vascular emboli (asterisk). Within the wall are observed bilharzia eggs, sometimes calcified (small arrow). The chorion is, on the other hand, the seat of a moderate mononuclear inflammatory infiltrate. C) Eggs of Schistosoma haematobium in a wet mount of urine concentrate, showing their characteristic terminal spine (original magnification ×400). D, E) Axial (D) and sagittal (E) reconstruction chest computed tomography of the lungs showing blurred ground glass nodules scattered over both lungs. F) A lung subpleural nodule of 0.2 cm greater axis shows at low magnification (original magnification ×4) a fibrous nodule surrounded by lymphoid follicles. G) Hematoxylin and eosin staining of the lung nodule (original magnification ×20) shows inflammatory population, mainly represented by eosinophils and a structure corresponding to a bilharzia egg. No territory suspected of malignancy was visualized.