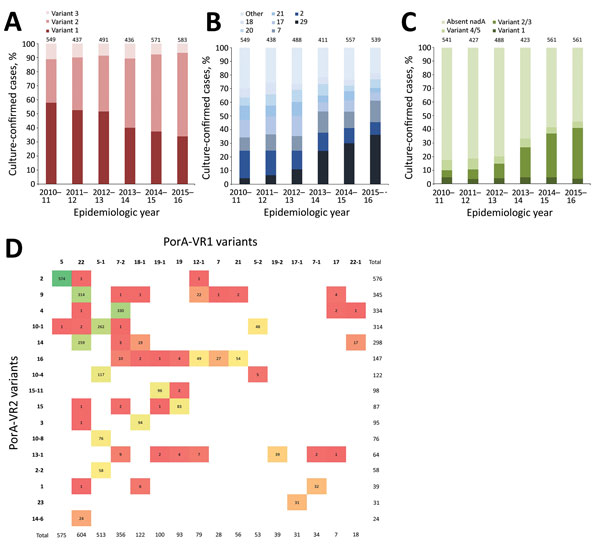 Figure 2. Distribution of 4CMenB vaccine antigenic variants among invasive meningococcal disease isolates, United Kingdom, 2010–2016. A) Proportion of isolates with fHbp variants 1, 2, and 3 by epidemiologic year. Peptide 1 is found in the Bexsero 4CMenB vaccine (GlaxoSmithKline, Bentford, UK), and cross-reactive variants included in this analysis are all variant 1 peptides. B) Proportion of isolates with the 7 most prevalent NHBA peptides by epidemiologic year; all other peptide variants are in “other.” Peptide 2 is contained in Bexsero. C) Proportion of isolates with NadA variants 1, 2/3, and 4/5 by epidemiologic year; there were no isolates with NadA variant 6. Peptide 8 (variant 2/3) is contained in Bexsero. Values above columns indicate number of unique peptides. D) Frequency distribution of PorA-VR1 (horizontal axis) and PorA-VR2 (vertical axis) variants. Variants shown were those that had >20 isolates in the collection from the United Kingdom during 2010–2016. Bexsero contains the MeNZB OMV vaccine components, including variants PorA P1.7–2,4. Color scales show the frequency of isolates from highest (green) to lowest (red). fHbp, factor H binding protein; NadA, Neisseria adhesin A; NHBA, Neisserial heparin-binding antigen; OMV, outer membrane vesicles; PorA, porin A.