We report 2 human cases of Borrelia miyamotoi disease diagnosed in Sweden, including 1 case of meningitis in an apparently immunocompetent patient. The diagnoses were confirmed by 3 different independent PCR assays and DNA sequencing from cerebrospinal fluid, supplemented by serologic analyses.

Borrelia miyamotoi is the cause of an emerging disease in the Northern Hemisphere, transmitted by hard (Ixodes) ticks. The bacterial species, described in Japan in 1995 (1), is genetically related to the relapsing fever borreliae and may be divided into Siberian, European, and American genotypes (2). B. miyamotoi disease (BMD), described in case series from Russia (3) and the United States (4,5), is a systemic illness causing relapsing fever, headache, myalgia, arthralgia, elevated liver enzymes, neutropenia, and thrombocytopenia. In addition, 3 cases of meningoencephalitis caused by B. miyamotoi have been reported worldwide, 2 from Europe and 1 from the United States, all in highly immunocompromised patients (6–8). We report 2 human cases of BMD diagnosed in Sweden, including 1 case of meningitis in an apparently immunocompetent patient.

On July 29, 2018, a 53-year-old woman (patient A) sought care at a hospital for headache, neck stiffness, and high-grade fever that had progressively worsened during the preceding week (Figure 1, panel A). Her medical history included previous cholecystectomy and gastric bypass surgery. Her sole medication was oxycodone (an opioid drug used to manage pain), which she was taking because of a recent elbow fracture. She had not been abroad during the preceding months but she had removed an attached tick while staying in Stockholm County 6 weeks earlier. No subsequent erythema appeared around the bite site. At admission, we found no neurologic deficits or signs of impaired consciousness. Cerebrospinal fluid (CSF) analysis showed total leukocyte count 321 cells/μL (reference <5 cells/μL), mononuclear cells 276 cells/μL (reference <5 cells/μL), and albumin 1,270 mg/L (reference <420 mg/L). Bacterial culture; anti-Borrelia antibody testing; and PCR for herpes simplex virus, varicella zoster virus, and enterovirus were negative in CSF. Serologic test results for tickborne encephalitis were negative. Viral meningitis was suspected.

The next day, clinical improvement occurred, and the patient was discharged. However, the patient’s condition then worsened, with more pronounced headache and neck pain, and she was readmitted on August 6. Blood cell and platelet counts and C-reactive protein levels were normal. CSF analysis showed total leukocyte count 517 cells/μL (reference <5 cells/μL), mononuclear cells 354 cells/μL (reference <5 cells/μL), and CXCL13 327 pg/mL (reference <190 pg/mL). We initiated intravenous treatment with ampicillin to cover Listeria meningitis; the fever resolved within 1 day. The CSF Borrelia antibody index came back weakly positive for IgM (Table) and, under the diagnosis of (atypical) Lyme neuroborreliosis (LNB), oral doxycycline was initiated (200 mg 2×/d for 14 d). Panbacterial 16S rRNA gene sequencing (9) of the CSF sample suggested B. miyamotoi, a finding that later was confirmed by specific PCR, sequencing, and serologic testing (Table).

A 66-year-old woman (patient B) living in Stockholm County was referred in August 2018 for 6 weeks of intermittent high-grade fever and 9 months of various other symptoms (Figure 1, panel B). She had rheumatoid arthritis, treated with methotrexate together with rituximab twice a year since 2011, but had been physically very active. Her symptoms began with headache and increasing fatigue in November 2017, a few days after returning from a 2-week trip to California and Nevada, USA. She had not noticed any tick bites during the trip but had had several tick bites in Sweden during the summer of 2017. She subsequently started experiencing progressing difficulties with concentration and memory and had relapsing febrile episodes. In January 2018, she received diagnoses of uveitis and iritis; vitritis of unknown cause was later diagnosed. She also had progressive hearing loss, and hearing aids were prescribed. In addition, she had loss of appetite and weight (15 kg within 6 months). In May she had a short episode of left-sided weakness, and transient ischemic attack was suspected. All this resulted in her quitting her work as an accountant and hardly being able to leave her house.

We treated the patient with doxycycline (200 mg 2×/d for 14 d); within 5 days, the patient regained her hearing, and the fever and headache disappeared. MRI 1 month later showed an almost complete regression of the contrast enhancement of the cranial nerves. By follow-up 2 months after finishing the treatment, the patient had resumed employment and felt almost completely recovered.

We performed B. miyamotoi quantitative PCR (qPCR) targeting the flagellin gene, slightly modified from Hovius et al. (6) (Appendix). The 2 successive CSF samples and 1 serum sample from patient A were positive by qPCR, as were the CSF and plasma samples from patient B (Table). 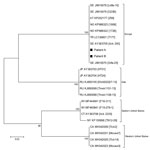 Figure 2. Phylogenetic tree based on 16S-23S intergenic spacer region sequences of Borrelia miyamotoi from 2 patients in Sweden, 2018 (patients A and B, black squares), and reference sequences. Tree constructed using the...

From 1 of the CSF samples from patient A and the CSF sample from patient B, we confirmed the presence of B. miyamotoi by nested PCR amplification and sequencing of the glycerophosphodiester-phosphodiesterase (glpQ) and p66 genes (6), as well as a fragment of the intergenic spacer (IGS) between the 16S rRNA and 23S rRNA genes (10) (Appendix). The DNA sequences of the 16S-23S IGS (Figure 2), glpQ, and p66 from patients A and B were identical to B. miyamotoi sequences derived from Europe but different from sequences derived from Asia and North America, indicating BMD contracted in Europe.

Finally, we pursued culture attempts in MKP-F media on CSF and serum samples drawn before initiation of antimicrobial drug treatment, retrieved from −80°C (Table), as described by Koetsveld et al. (13). After 2 months of culture, all samples remained negative.

Epidemiologic surveillance of emerging tickborne pathogens is crucial to increase awareness of the diseases that can be contracted after tick bites. Previous studies have shown that B. miyamotoi is present in Ixodes ricinus ticks in Scandinavia (14,15), but no human cases of BMD have been reported, and public health importance has been uncertain. Until now, severe disease, including slowly progressive CNS symptoms (6,7), has been reported in immunocompromised patients, but our findings indicate that B. miyamotoi may also cause CNS infection in immunocompetent persons (patient A). The clinical presentation differs from that of LNB, and results of serologic tests that are routinely used for LNB diagnosis can be negative. Therefore, we need to raise awareness of BMD among healthcare providers and ensure that adequate diagnostic methods are available. BMD should be a differential diagnosis in cases of fever and CNS symptoms after a tick bite in both immunosuppressed and immunocompetent persons.

Dr. Henningsson is a specialist in infectious diseases and clinical microbiology with a position as senior consultant in Region Jönköping County and as associate professor at Linköping University. Her primary research interest is tickborne diseases.

We thank the patients for giving us their permission to report about their clinical symptoms and disease course. We also thank Gärda Andersson for laboratory support.