In Russia, 131,590 cases of hemorrhagic fever with renal syndrome caused by 6 different hantaviruses were reported during 2000–2017. Most cases, 98.4%, were reported in western Russia. The average case-fatality rate was 0.4%, and strong regional differences were seen, depending on the predominant virus type.

Russia, bordered by Europe in the west and Asia in the east, included HFRS in the official reporting system of the Ministry of Public Health in 1978 (2). Clinical and laboratory diagnoses for reported cases are confirmed serologically by indirect immunofluorescence assay (Diagnostikum HFRS; Federal Scientific Center for Research and Development of Immune and Biological Products of the Russian Academy of Sciences, http://chumakovs.ru).

HFRS has the highest incidence rate of all reportable zoonotic viral diseases in Russia. In the west, in administrative regions close to the border with Europe, reported cases mainly are caused by PUUV carried by bank voles (Myodes glareolus) and to a lesser extent by 2 types of DOBV, Kurkino virus (KURV) and Sochi virus (SOCV) (3). Vectors for DOBV subtypes in western Russia are the western subtype of striped field mouse (Apodemus agrarius agrarius), which hosts KURV, in the central regions; and the Black Sea field mouse (A. ponticus), which hosts SOCV, in southern regions. In eastern Russia, near the border with Asia, HFRS cases primarily are caused by HTNV carried by the eastern subtype of striped field mouse (A. agrarius mantchuricus), AMRV carried by the Korean field mouse (A. peninsulae), and, less frequently, SEOV carried by the Norway rat (Rattus norvegicus) (4,5). 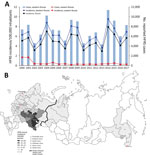 Figure. Distribution of hemorrhagic fever with renal syndrome caused by hantavirus in Russia, 2000–2017. A) Mean number of reported cases and incidence of disease, by region; B) geographic distribution and incidence rate...

During 2000–2017, a total of 68 of Russia’s 85 administrative regions reported 131,590 HFRS cases, an annual average rate of 4.9 cases/100,000 inhabitants (Figure, panel A). Annual incidence rates varied greatly, and epidemics occurred every 2–4 years with occasional 2-year peaks, such as in 2008–2009 and 2014–2015. This phenomenon is related to sequential independent epidemic years in 2 distinct, highly affected regions rather than geographically synchronized hantavirus activity on a nationwide scale.

HFRS appears to affect persons 20–50 years of age most frequently (65%), and ≈80% of cases in Russia were in men. Only 3,157 (2.4%) cases were reported among children <14 years of age. Most HFRS cases in western Russia occurred during the summer and autumn, but cases in the far eastern part of the country occurred in autumn and winter (4,5).

Dr. Tkachenko is a head of scientific direction in the Chumakov Federal Scientific Center for Research and Development of Immune and Biological Products of the Russian Academy of Sciences, Moscow, Russia. His major research interests include hantavirus ecology and epidemiology, devising hantavirus laboratory diagnostic methods, and developing vaccines against hantaviruses.

This study was supported by Russian Academic Excellence Project 5-100.