Amblyomma ovale hard ticks are located predominantly in South and Central America but can also be found in areas of the nearctic, particularly Mexico and the southern United States (1,2). Immature stages of this species parasitize many mammal and bird species, and adults complete their life cycle on artiodactyls and carnivores, particularly canids (1,3). A. ovale ticks have been collected predominantly in sylvatic areas, but because free-roaming dogs often enter sylvatic habitats and return to peridomestic settings with attached ticks, these ticks have become distributed into transitional and rural environments (3). In Brazil, this species has been implicated as the main vector of the Rickettsia parkeri strain Atlantic Rainforest, an eschar-associated spotted fever pathogen (3,4). Since its discovery, strain Atlantic Rainforest has been detected in other hard tick species, including A. aureolatum and Rhipicephalus sanguineus sensu lato in Argentina, Colombia, and Belize (4–6).

In Mexico, A. ovale ticks have been collected from 8 species of mammals in 10 of 32 states (2). Despite the wide distribution of A. ovale ticks in Mexico, attempts to identify R. parkeri strain Atlantic Rainforest in this species are lacking. 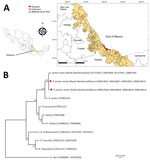 To extract DNA, we used the Cheelex-100 protocol as previously reported (7,8). To evaluate the DNA quality of samples, we amplified a 400-bp segment of the ixodid 16S rRNA gene (5). We screened DNA extracts for Rickettsia species using a PCR targeting an 800-bp segment of the citrate synthase (gltA) gene. With gltA-positive samples, we performed PCRs amplifying segments of the htrA (549-bp), sca0 (532-bp), and sca5 (862-bp) genes (7,8). We purified PCR products using Agencourt AMPure XP (https://www.beckman.com) and sequenced amplicons on the ABI 3730xL DNA Analyzer (https://www.thermofisher.com) at the Sequencing Unit of the National Institute of Genomic Medicine (Mexico City, Mexico). We generated consensus sequences using Geneious 2019.1.3 (https://www.geneious.com) and compared these sequences with those of validated Rickettsia species deposited in GenBank using the blastn tool (https://blast.ncbi.nlm.nih.gov). We performed global alignments using ClustalW (http://www.clustal.org), concatenated sequences in BioEdit (https://bioedit.org), and then constructed phylogenetic trees in MEGA 6.0 (https://megasoftware.net) using the maximum-likelihood method and 10,000 bootstrap replicates.

We collected 22 adult (16 female, 6 male) A. ovale ticks from 6 dogs (tick density of 2–5 ticks per dog). We could amplify ixodid 16S sequences from all samples. We sequenced the 16S gene of 1 female (GenBank accession no. MK792953) and 1 male tick, and both exhibited 99.5% (404/406 bp) sequence identity with sequences of A. ovale ticks from Colombia (GenBank accession nos. MF353104.1–5.1). Six (27.3%) specimens tested positive for Rickettsia DNA, including 1 female specimen from Alvarado, 2 female specimens from Martínez de la Torre, and 2 female specimens and 1 male specimen from Catemaco. The gltA, htrA, sca0, and sca5 gene segments could be amplified for all 6 samples. Each gene segment was 99%–100% identical to that of the R. parkeri strain Atlantic Rainforest from Brazil and Argentina (Figure, panel B; data not shown). Phylogenetic analysis corroborated the presence of 2 R. parkeri strain Atlantic Rainforest haplotypes: 1 for the northern region (Martínez de la Torre; GenBank accession nos. MK844821, MK844823, MK844825, MK844827) and 1 for the central and southern regions (Alvarado and Catemaco; GenBank accession nos. MK844820, MK844822, MK844824, MK844826) of Veracruz. With a bootstrap value of 100, both haplotypes clustered in a clade comprising other R. parkeri strains.

Our findings document R. parkeri strain Atlantic Rainforest farther north than previous reports (4–6). The discovery of this pathogen in ticks associated with dogs in different localities of Veracruz has implications for public health safety. In this state, the Ministry of Health reported 22 cases of spotted fever during 2015–2017 (9). R. rickettsii, the etiologic agent of Rocky Mountain spotted fever, has been previously described in A. mixtum (formerly A. cajennense) ticks collected from Veracruz (10), suggesting the potential for co-circulation of R. rickettsii and R. parkeri in ticks in this state. Two other R. parkeri lineages have been detected circulating in Mexico: R. parkeri strain black gap in the rabbit tick (Dermacentor parumapertus) in Sonora and Chihuahua (7) and R. parkeri sensu stricto associated with A. maculatum ticks (8). These findings emphasize the need for enhanced surveillance studies of these rickettsia in Mexico to better elucidate the evolutionary, ecologic, and public health relevance of the various R. parkeri strains.

Dr. Sanchez-Montes is a biologist at the Tropical Medicine Center of the Universidad Nacional Autónoma de México, Mexico City, Mexico, in charge of detecting rickettsial agents. His interests are the identification of rickettsial agents, pathogen–host interactions, and epidemiology of zoonotic emerging diseases.