Melioidosis is thought to be endemic, although underdiagnosed, in Africa. We identified 5 autochthonous cases of Burkholderia pseudomallei infection in a case series in Kenya. Incidence of B. pseudomallei bacteremia in Kenya’s Kilifi County is low, at 1.5 cases per million person-years, but this result might be an underestimate.

Burkholderia pseudomallei, the causative agent of melioidosis, is a gram-negative bacillus endemic particularly in northern Australia and South and Southeast Asia. Worldwide, B. pseudomallei causes ≈165,000 cases of disease and ≈89,000 deaths annually (1). The presence of B. pseudomallei in Africa has been demonstrated by sporadic cases of melioidosis reported in travelers returning from countries including Kenya (2). Indigenous culture-confirmed cases have been reported in only 4 countries in Africa, mainly from research centers with diagnostic laboratory facilities (3).

The first case of melioidosis linked to Kenya was diagnosed in 1982 in a tourist from Denmark who had visited Nyali (an area of Mombasa City), ≈50 km south of the town of Kilifi (2). Follow-up clinical surveillance in Nairobi and environmental surveillance from other regions in Kenya yielded no B. pseudomallei isolates (4). However, growing concerns over possible underestimation of the disease in potentially endemic areas, including in tropical Africa, have led to calls for improved surveillance (5).

During 1994–1998, blood culture was performed on all febrile patients admitted to the pediatric wards at KCH. Since 1998, all pediatric patients <15 years of age admitted, except those having trauma, burns, or elective surgery, have had blood samples drawn for culture. Surveillance for patients >15 years of age began in 2007; blood samples are drawn at admission for cultures on patients meeting clinical criteria for possible invasive bacterial disease. Since 2002, hospitalization events have been linked to the Kilifi Health and Demographic Surveillance System (KHDSS), which monitors the population of ≈280,000 over an area of 891 km2 (8). Informed consent is obtained from all patients participating in the surveillance, including for storage of isolates and future use of clinical data.

Blood samples for bacterial cultures were collected in BACTEC Peds Plus or BACTEC Plus Aerobic/F bottles (Becton Dickinson, https://www.bd.com) and incubated on a BACTEC FX 9050 Automated Blood Culture instrument (Becton Dickinson). Nonfastidious, oxidase-positive, gram-negative bacilli were identified by using API 20NE test kits (bioMérieux, https://www.biomerieux.com). We reviewed all gentamicin-resistant, glucose-nonfermenting, gram-negative rods, with the exception of Pseudomonas aeruginosa, even if the API 20NE identification was acceptable, to account for difficulties in speciating Burkholderia spp. with biochemical methods. 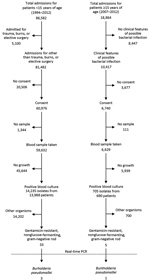 None of the case-patients had any history of travel outside Kilifi County. Three died during the course of their admission. No further information is available for the 2 case-patients who survived because they were not residents of the area surveyed by KHDSS.

We identified 5 cases of melioidosis from a single surveillance site in Kenya. Despite reports suggesting that melioidosis is endemic but underdetected in the region (5), we demonstrated low incidence in this part of Kenya. Even so, B. pseudomallei has emerged as an underdiagnosed cause of sepsis in Kilifi County. The empirical treatment used for sepsis, ampicillin and gentamicin, does not cover B. pseudomallei. The lack of pathognomonic clinical features makes it difficult to detect melioidosis clinically, especially in areas to which the disease is not endemic. In the series we report, 2 case-patients died before receiving definitive treatment, and only 1 case-patient received antimicrobial drugs recommended to treat melioidosis.

The integrated, population-based bacterial surveillance system in Kilifi County provides a unique opportunity to estimate incidence. Routine blood culture sampling of all admitted patients <15 years of age and eligible patients >15 years of age eliminates reliance on clinical suspicion for bacteremic melioidosis. The use of molecular methods on isolates suspected to be B. pseudomallei will probably enhance case detection because B. pseudomallei is commonly misidentified or unidentified by culture (9). Only 2 isolates in our study were identified by using standard techniques, despite the reported good discriminatory performance of API 20NE in distinguishing B. pseudomallei and B. cepacia (10).

Our reported incidence rates might still be underestimated. Our data do not account for KHDSS residents who do not go to KCH. For example, ≈64% of deaths in children <5 years of age in the KHDSS area occur at home or in other healthcare facilities (8). Furthermore, as demonstrated by the fifth case, the incidence of nonbacteremic infection might be higher because non–blood culture samples are not systematically collected. Only 50%–75% of patients with melioidosis are bacteremic (11), and culture has an estimated sensitivity of 60.2% for melioidosis (12). In addition, our screening method excluded gentamicin-susceptible isolates. If gentamicin-susceptible B. pseudomallei is as common in Kenya as reported in other areas (13), additional surveillance that includes these organisms could increase the reported incidence rates. Finally, melioidosis often is unevenly distributed within endemic areas, as noted in Thailand (14). Despite these factors, our results suggest that, although B. pseudomallei is present in tropical Africa, the incidence of invasive melioidosis is surprisingly low.

Dr. Muthumbi is a medical epidemiologist at the KEMRI–Wellcome Trust Research Programme in Kenya. She is a doctoral student in infectious disease epidemiology.

We thank the nursing, clinical, and clerical staff of Kilifi County Hospital and the patients and their families.

The surveillance work was funded by the Wellcome Trust (core support to KEMRI–Wellcome Trust Research Program grant no. 203077) and by Gavi, the Vaccine Alliance, through support for a study of pneumococcal vaccine impact. J.A.G.S. is supported by a Wellcome Trust clinical research fellowship (no. 098532) and D.A.B.D. is funded by Wellcome grant no. 106698/Z/14/Z.

E.M.M. is supported through the DELTAS Africa Initiative [DEL-15-003]. The DELTAS Africa Initiative is an independent funding scheme of the African Academy of Sciences’ (AAS) Alliance for Accelerating Excellence in Science in Africa and supported by the New Partnership for Africa's Development Planning and Coordinating Agency (NEPAD Agency) with funding from the Wellcome Trust [107769/Z/10/Z] and the government of the United Kingdom. The views expressed in this publication are those of the authors and not necessarily those of AAS, NEPAD Agency, Wellcome Trust, or the UK government.

This paper is published with the approval of the director of the Kenya Medical Research Institute.